Defying heavy rain, some 500 people made their way to the Times Square in NYC to attend the inaugural rally, organized by the newly-founded Human Rights Coalition Against Radical Islam (HRCARI), to the worldwide human rights violation by Muslims espousing the radical Islamic ideology. 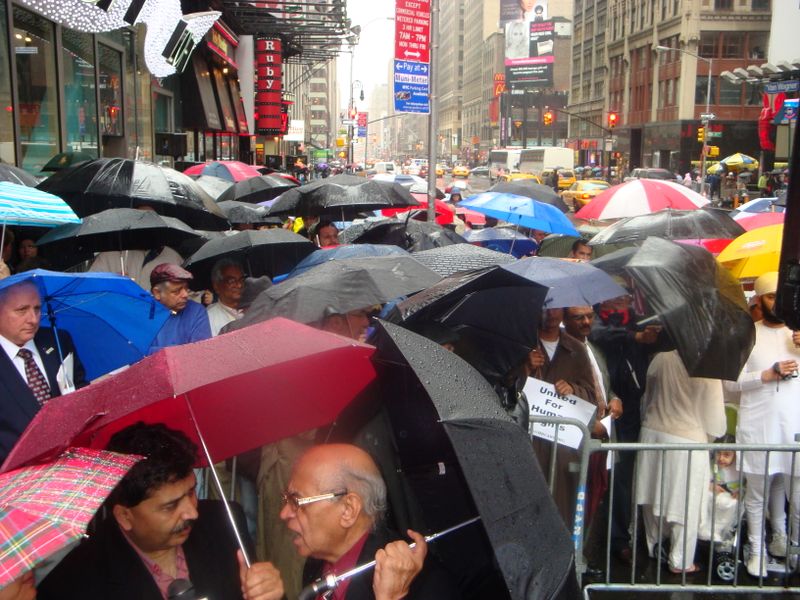 Tawfik Hamid, former member of the Jemaah Islamiya terror group from Egypt, joined Buddhist, Hindu, Sikh, Christian, Jewish and other Muslim leaders and organizations to call for defeating radical Islam and heightening awareness about the danger posed to human rights by Islamic supremacism across the globe. 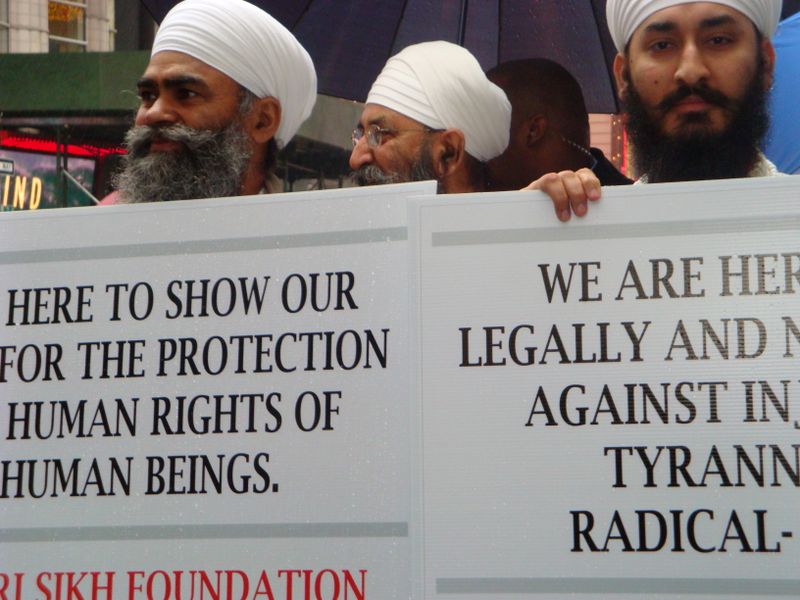 HRCARI spokesperson notes, “As part of this initiative, we intend to educate elected officials to helps prevent the spread of Shariah Islamic law. We will work to publicize the threat of Radical Islamic terrorist groups and their allies, and endeavor to protect the right to freedom of religion, and freedom of speech in the face of those who seek to silence advocates of human rights against the threat of Radical Islam.”

HRCARI believes that Radical Islam is a worldwide threat against commonly accepted human rights and is the most urgent topic of our generation.

Arish Sahani delivered the following speech on plight of Hindus under radical Islam at the rally:

I stand before you and feel proud of living in USA.

I was born In Rawalpindi, now in Pakistan.

We were forced to leave our ancestral land because we were Hindus.

There are millions like me in USA who have come from different countries. What is the status of my Hindu brothers and sisters left behind in Pakistan and Bangladesh. To quote Hindu American Foundation report endorsed by several US congressmen and Senators, in 1947 during partition, Hindus in Pakistan are about 25% of population in Pakistan. Today, in about 60 years that population is reduced to less than 1.6%.

What happened to the millions of Hindus. Mostly were forced to convert and many fled the country. The report quotes about the alarming trend of Hindu girls being kidnapped, raped and held in Madrassas and forcibly converted. Pakistani's Government sanctions discrimination through blasphemy laws. Just yesterday, areas captured by Taliban forced followers of Sikh religion, to vacate their homes and businesses for not paying oppressive Jizya tax.

In 1947, in what is Bangladesh today, Hindus were 30% of population. Today they are less than 10% of the population. The report chronicles daily acts of murder, rape, kidnappings, temple destruction and physical intimidation. Bangladeshi Govt. promulgated vested property act allows it to capture property of Hindus any time where nearly 1.2 million families have their properties taken over by the Government.

What about Hindus in majority India. In one area of India where Hindus are a minority, Kashmir valley, 300,000 Hindus were driven out by radical Islamists from their homes using rape, murder and intimidation. They are living in squalid camps for last 18 years. Six to eight families are living in one room with meager assistance from Government. In just last 4 years both in the number of people died due to terrorism and in the number of terror incidents in India it is just next to war torn country Iraq?

Now the question is:

Do you want to live under radical Islam?

Do you know what radical Islam is?

Do you know what happens when radical Islam takes over you neighborhood.

Do you know under radical Islam no other religion can exist?

Jews Christian and Hindus will be just killed.

Now there are 57 Islamic nations in this world. The radical Islamists in several of those countries want to convert whole world to Islam. We read in the news media that radical Islam wants to put its flag on White house. They want to take over Europe and India by brainwashing Muslims to increase the population.

Do we know the history of radical Islam? Does the so called political correct journalists have any idea what is in store for the future of the humanity. In the last 1400 years radical Islam is cause for murder of 270 million people, 120 million Africans, 60 million Christians, 80 million Hindus and Sikhs and 10 million Buddhists. In 1399, Sultan Taimur massacred 100,000 Hindus on one day and today the mountain is called ‘Hindu Khush’, the slaughter of Hindus. Did you know what is today’s Taliban dominated areas such as Pakistan and Afghanistan that caused 9/11 attack were just few hundred years ago filled by followers of non-violent and gentle Buddhist religion? According to well known American Historian Will Durant, Islamic invasion of India is probably the bloodiest story of history of Human kind’. Many historians say the holocaust of Hindus in last 1400 years is much bigger than the holocaust of Jews and Gypsies.

Are we going to sit and do nothing?

Will our politicians let radical Islam take over USA?

Will you allow Radical Islam to take our freedom and education system and control lives of our children and women?

Would you like the Shari a Law under which girls gets no education and women have to cover her body with Black Burka?

Will we allow politically correct media allow to dull our minds to the threat of radical Islam?

Will you sit back and watch while Radical Islamists subverts democracies by urging Muslims to increase population by 8 to 10 times than that of native population?

Can you imagine Europe is lost from the free world, which is a reality in less than 3 decades under current demographic studies?

We should also ponder over the question as to who is responsible for spreading radical Islam all over the world. It is Saudi Arabia and new converts to Islam. Saudis are spending billions of dollars in USA, to control our financial institutions, educational system, print and electronic media and financially backing Mosques that teach intolerance. While countries like Pakistan are foot soldiers, Saudi Arabia is the funder of terrorism today. Just read about what Saudi Arabia teaches children about other religions and ponder why so many educated Saudis committed barbaric 9/11.

Unfortunately, the ancestors of many Muslims today went through these brutal experiences. The first victims of radical Islamists are Muslims. It seeks to force subjugation of half of population of Muslims by subjugating women to second class citizens. We need to join hands with Muslim brothers and sisters who see through this and have the courage to speak against them and join the hands of all humanity.

Radical Islam is alien culture not fit for this era. It is a brutal past that is being revived by Western Petro-dollars by rogue countries such as Saudi Arabia that would not allow any other religion to be practiced in their country.

I will urge and request law enforcement officials to keep a watch on activities of radical Islamists and Organizations such as CAIR and Muslim brotherhood.

Hence, I urge all of you present here that if you want to live in peace and freedom you have to stand up and raise your voice and express your outrage. Stand up for the freedom of all humanity.

Freedom does not come free.

Read all about radical Islam and educate yourself and your Congressmen and Senators about it. Take media to task and let them not cause the suicide of our culture in the name of political correctness.

Make sure that freedom of expression guaranteed under the Constitution is protected.