AL-QAEDA IN THE ARABIAN PENINSULA HAS BEGUN POSTING INTERNET ADVERTISEMENTS OFFERING TRAINING FOR SUICIDE BOMBERS TO TARGET THE great satanic empires of THE kafir rulers, SUCH AS the USA, ISRAEL, UK, FRANCE and all OTHER Infidel lands where possible. 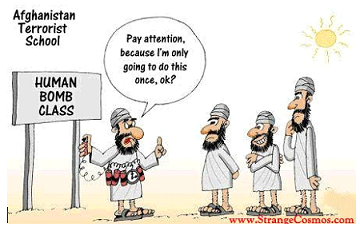 The advertisements, asking for Islamic volunteers to get in touch via e-mail with complete details about their own experience of Jihad in Allah’s way and about their proposed targets, are posted on a variety of Jihadist forums on the Internet, including Al-Fidaah, Shmoukh al-Islam, Honein, Al Nusrah Front, Muslim Brotherhood, etc.

Al-Qaeda and its regional offshoots often use Jihadist Internet forums to post statements claiming responsibility for attacks, and to communicate with its followers and fellow comrades in a just cause for greater Islam!

“The aim of this training is to continue with our brothers – the Mujahedeen’s who are seeking to carry out terrorist operations that make for great killings and slaughtering of the enemies of Islam – Allah-o-Akbar!” said the advertisement attributed to Yemen-based Al-Qaeda in the Arabian Peninsula.

“It is clear now that the individual Islamic jihad, or what is called the lone wolf project, has become more widespread and its features have started showing —in summary, it is a complete jihadist operation to be carried out by a lone single bomber.”

”It said the targets of the attacks were “those who are fighting the Muslims and Islam” and specifically pointed to “economic, military and media interests of the enemy.”

“Their identity must be, according to priority, American, Israeli, French and British. -- End

If the said advertisement becomes a success, it would in all likelihood put a dent in the ever-swelling Islamic unemployment numbers in the Kafir nations of the west, and will relieve the burden upon the tax-payers. It's will be a win-win outcomes, as the Jihadis get their coveted tickets to Jannah, the Islamic Paradise.