Boulevard of Islamism: How Islam is Spreading and Impacting Europe

Introduction: On 25 January, 2012, the Algerian essayist and author, Hamid Zanaz interviewed Mireille Valette, the author of “Boulevard de l’islamisme: L’essor du radicalisme musulmans en Europe, illustré par l’exemple.” An Arabic version of the interview appeared in “Al-Awan”, an online reformist Arabic journal, on Sunday, 20 January, 2013.[i] Here is my translation of the Interview.

Hamid Zanaz (HZ): Does Islam constitute a serious menace to the West? 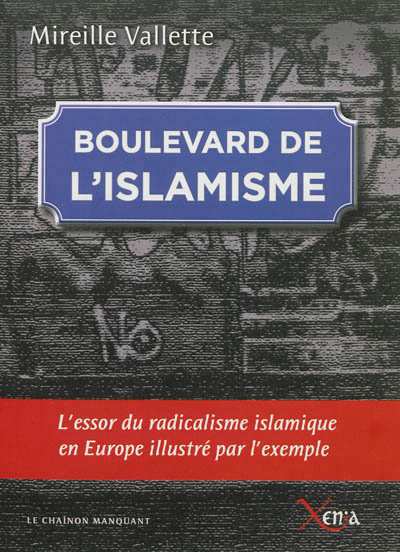 Mireille Valette (MV): Islam (as taught in the mosques) is a menace to the very foundations of our democracies. Islam has already been responsible for some strong sexist regressions such as standing against any mixing between the sexes, the forcing of the niqab on women, and requiring special hours for either sexes in public swimming pools, and forbidding the shaking of hands in greetings between men and women.

It’s the first time in history that an immigrant group requires its people to detest the host society that had welcomed them, and to remain apart, as much as possible. This hatred of the West manifests itself in criminal acts, such as parents murdering a daughter, or a brother killing his sister because “she has been swayed by the Western way of life.” Furthermore, radical Muslims never cease fighting anything that bears witness to our Judeo-Christian traditions. For example they ask for the suppression of Christmas trees and the singing of carols in our schools; and they strive to change the names of our festivities such as renaming “Christmas stores” as “winter stores!” etc.

HZ: You do emphasize the diminution of the freedom of expression

MV: This is a very serious matter.  Representatives of Islam are now demanding that no criticisms be made of their religion, or its precepts made fun of. While almost daily, some Muslim suicide bombers die and kill others in the name of their faith, convinced that it would earn them a place in Paradise. Furthermore, throughout the entire Muslim world, human rights, specifically women and minority rights, are gravely lacking. Almost no voice is lifted by Muslim organizations to address these realities, save a small group of Muslim intellectuals who share our values.

In order to place limits on our freedoms, Muslims engage in demonstrations and protests against certain caricatures or a film, thus attempting to force us into self-censorship. Death threats abound against those judged to have insulted Islam. We are required to pass laws that would prohibit criticisms of religions. Such measures are favored by so-called anti-racist organizations and by some judges who confuse any criticism of a religion or the behavior of its followers, as a sign of a racist or religious hatred.

HZ: In your book, you provide examples for this pressure toward self-censorship

MV: Yes, there are multiple examples. In Great Britain, a student organization was asked to act “prudently” and withdraw a portrait where both Jesus and Muhammad appeared side by side. In Canada, a TV satirist, known for his criticisms of Islam, keeps getting threats such as “I hate you as a Catholic, or as a Jew. I will attempt to hurt you, your wife, and your children.” The Dutch Johan Vlemmix stops singing a parody, “Do, do boerka,” after having received several death threats. An American journalist working on a documentary that would unveil the radicalism of those Muslims who were promoting the building of a mosque, was forced to stop his work in order to protect his wife Then in September 2012, the TV Channel 4 decided not to telecast a documentary dealing with the beginnings of Islam, after it received 1400 complaints; also the author of the documentary received death threats. This happened because the scholarly research that went into the production of the work did not support the traditional Islamic account.

HZ: Is Switzerland on its way to Islamization?

MV: There is no exception, even though the process is slower than elsewhere; for one thing the Muslim population is composed of immigrant workers mostly from Kosovo who tend to be less religious than Arabs or Turks. On the outer hand, we have no Islamic ghettos, as social mixing is generally accepted.

However, Muslim demands in Switzerland tend to be similar to Muslims living in other parts of Europe. For example, when it comes to the mixing of the sexes, separate cemeteries, and the building of mosques, Muslims require that their own traditions be observed. In a previous book, I demonstrated that all the Muslim religious leaders who express themselves in the public square, tend to be fundamentalists, and generally close to the Muslim Brotherhood, as is the case with the brothers Ramadan[ii]

HZ: By writing “Don’t Panik” (Don’t Be Afraid!) the rapper Medine, and Pascal Boniface, the sociologist, sought to portray the fears and the prejudices that are encountered by young Muslims, and generally, by immigrants living in the suburbs of the major cities. On the other hand, you wrote in “Boulevard de l’islamisme” that “a growing number of immigrants demand the continued practice of a petrified Islam in Europe, the very “Islam” that has been responsible for the sclerosis that afflicts their homelands”

MV: I was referring to the unfortunate countries of the “Arab Spring” where the majority of the populations fervently desire the application of the Sharia. This Law has never succeeded in feeding the population. Now, due to their deplorable plight, the pressure is mounting for migration to our lands. By now, we have learned that their coming to the lands of plenty does not change their beliefs; Islam and its medieval precepts remain at the very heart of their convictions.

HZ: Is the West capable of dealing deal with this systematic aggression that you have described, and how?

MV: First of all, the elites, the politicians, and the media, must open their eyes. When the West no longer considers the veil as simply a cultural matter, when all reactionary and intolerant demands have been designated as they really are, a great step will have been taken.  Furthermore, it is imperative that we stop following the injunctions of the United Nations and the European Union that require us to combat our “Islamophobia.” Also, there are a number of legislative actions that could be taken to limit immigration, especially the facilitating of the migration of family members such as brothers and sisters, the surveillance of mosques, helping in the education of the worshippers to become more open, fighting anti-Semitism, critiquing tendencies toward bigotry, the absolute respect for, and the controlling nature of such rites as Ramadan, Pilgrimage to Mecca, Feast of al-Adha, halal, etc.[iii]

HZ: How do you explain the Western passivity vis-à-vis this conquering Islam?

MV: I am unable to explain it completely. There is this ingrained tendency among us to atone for our past which does not allow us to criticize immigrants by pointing to our own culpability. Most likely, we tend to project on others our own cultural openness, such as, ‘how can we ever imagine that those whom we have welcomed, can hate us?’  It is more comforting to reverse the terms of the problem. Rather than fighting obscurantist and radical Islamists, we point to the animosity of the “extreme Right” toward them!

HZ: May we point to a Western tendency for a voluntary blindness and bondage?

MV: There is no doubt about the blindness that afflicts the elites, and particularly, the Left. I find it hard to understand that.  There is this desire to maintain an angelic view of immigrants by obstinately refusing to listen, to observe, and to debate the issue.  It is this rejection of a reality that prevents you from reconsidering the rosy view of the immigrants, hat you have been propagating for the last several years.

As to the self-inflicted bondage or servitude among Muslim immigrants, it is evident where Muslim women cover their bodies and their hair, in order not to excite men’s libido. Not only that, but at the mosques the young women are taught that Muslim women are greatly superior to Western women who are prone to prostitution, Their leaders confer upon them this grand and magnificent task of showing how different, modest, and pure they are.

To behold Muslim women wearing the symbol of their oppression in a society that has given them freedoms that no Islamic land has ever offered them, is beyond belief!

2. Tariq Ramadan and his brother Hani Ramadan are sons of Said Ramadan, who played a big role in the spread of Islam in Western Europe after WWII. Said Ramadan married Wafa al-Banna, daughter of Hassan al-Banna, he founder of the Muslim Brotherhood in 1928.

Tariq studied at the University of Geneva and at Al-Azhar University in Cairo. He teaches in the department of Islamics and theology at Oxford University, and Hani is a teacher at a secondary school in Geneva, Switzerland.

See the Review: “A Mosque in Munich”

3 Feast of al-Adha, the commemoration of the supposed trip of Abraham with his son Ishmael to Mecca, where Abraham was told to sacrifice him; a distortion of the Biblical account of Abraham’s trip with his son Isaac to Mount Moriah where Isaac  was to sacrificed, and instead a lamb was provided miraculously to be scarified. This is an example of many historiographical errors in the sacred text of Islam. Halal is a slaughtered animal that conforms to Sharia.