Shazia Masih Rape & Killing: The Evil of Islam in Action

In Pakistan, a 12-year-old minor Christian girl, employed as a slave-like maid by a leading lawyer, was raped & killed, while lawyer-colleagues of the culprit are demonstrating and threatening to kill anyone, who may help the Christian girl's case. What else can one expect from the barbaric religion of Muhammad? 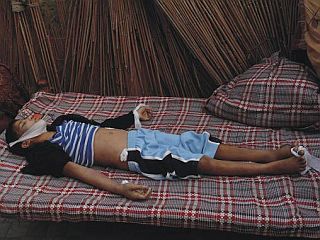 In Pakistan a young 12-year-old Christian girl, employed by a leading lawyer named Mohammad Naeem, as a house maid for a slave-like pittance of a few hundred rupees a month, was murdered after apparently being raped.

This despicable injustice was committed by one of the leading advocates of the so-called justice in Pakistan, a country that institutes many sharia principles and has strict blasphemy laws to protect the state ideology of Islam. This tragic incident shows the evil of the very most upstanding citizens of that Islamic hell on earth.

How in the modern age could an educated and upstanding citizen, especially a lawyer and defender of justice, of any country even employ a child for a slave-like wage to do his household work?

While this is an absolutely scandalous outrage in the modern world, it is but the beginning of the evil of Islamic morality in action. Under Islam, Muslim men may even have sex with his maids, i.e. his right-hand possessions. It seems that this upstanding Muslim lawyer was just taking advantage of his Islamic rights when things got a bit out of hand.

Not to be ashamed by this atrocity, the upholders of Islamic justice (i.e. injustice for non-Muslims), a.k.a. this evil man’s colleague-lawyers, have been demonstrating in support of the accused lawyer, who is now under arrest; they have even threatened to kill anyone assisting the case brought by relatives of the murdered girl.

That the evil lawyers even believe that they can employ little children as slave-like maids shows that they are unfamiliar with even basic principles of human rights. How could they uphold justice in the modern world?

There will be no justice for the poor and weak, of non-Muslims in particular, in Pakistan whilst Islamic morality rules the roost; for, Islam’s barbaric morality is meant to crush and exploit the weakest, particularly non-Muslims, at the hands of Muslim males.

Could a religion from a founder, who enslaved and raped young women, teach morality for the modern world?