100% Proof That Islam is Peaceful

Get the proofs from the words of Muhammad to Saladin to Imam Khomeini... 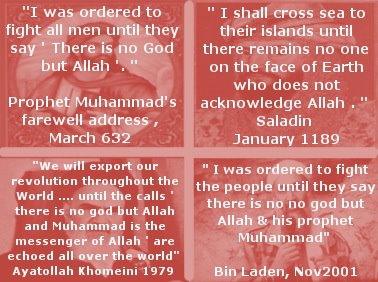 "I was ordered to fight all men until they say 'There is no God but Allah'."

"I shall cross sea to their islands until there remains no one on the face of Earth who does not acknowledge Allah."

"We will export our revolution throughout the World .... until the calls 'there is no god but Allah and Muhammad is the messenger of Allah' are echoed all over the world."

"I was ordered to fight the people until they say there is no god but Allah, and his prophet Muhammad."