Not In My Name: A Campaign of Disinformation and Deception

Muslims in Britain have started a campaign entitled #NotInMyName, referring to ISIS barbarisms in the Middle East. It can at best be described as a disinformation campaign to deceive unaware non-Muslims about the atrociously violent teachings of Islam.

Quoting the organizers of the campaign:

“British Muslims are taking a stand against the Islamic State of Iraq and Syria (ISIS) by launching a social media campaign to deliver an important message: Hate and violence do not represent their religion.”

“Many others are saying the extremists are “hiding behind a false Islam.”

Stretching from Dearborne in Michigan in the north, to Los Angeles in California in the West, to Miami in Florida in the South, to New York in the East – an Islamic curtain has descended upon the United States!

Need of the Hour: A Fatwa against Islam and Prophet Muhammad

On 31 August 2014, Imams of Britain issued a fatwa, prohibiting British Muslims from supporting and joining the barbaric Islamic State Jihadi terrorist group in Iraq and Syria. The fatwa termed the Islamic State's ideology as “poisonous” and supposedly against the teachings of Islam.

There has been way too many such fatwas over recent years with little impact. Muslims just seem to ignore such fatwas as western-living Muslims joining Jihadi cults both home and abroad continue swelling. It is estimated that at least 500 British Muslims, twice the number of Muslims serving in the British Army, have joined the barbaric Islamic State Jihadi group in Iraq and Syria.

Under these circumstances, and given the seriousness of the danger the world stands face to face with Islamic Jihadi terrorism, the British Imams should have issued a fatwa as follows that could have some beneficial impact for humanity if at all any:

Muhammad the Criminal Mastermind of Arabia and Allah His Imaginary Slave

The supposed God of the Universe must be of Moral Perfection, so would His representatives on earth. Allah duly claims the same about Prophet Muhammad in the Quran. Therefore, the Hadiths would outline a character and personality of Muhammad that would be of moral perfection. If there is anything said in the Quran or any character and personality traits of Muhammad in the hadiths lacks moral perfection, that would negate the Quran to be the word of God , and Muhammad's claims of being the Prophet of God. In other words, if any words or deeds of Muhammad in authentic hadiths shows him spreading unjustified hatred of non-Muslims, unjustified degradation or denigration women or any other human beings, unjustified act of violence, unjustified act of leading or ordering or planning wars, let alone ordering murders, massacres, rape, enslavement, booty, child molestation, sex slavery, stoning, maiming, terror, torture invoking the name of God, then Muhammad could not be a prophet of God but a fraud.

The Obscenity of Islam 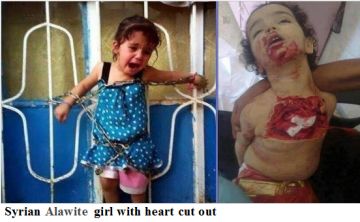 The photo is from October 18, 2013. "Muslims killing Muslims: The Syrian Shiite child had her heart cut out by the Saudi-backed Sunni "insurgents" after she was forced to witness the murder of her parents! Shiites are regarded as "infidels" by Sunnis.