Praying on the Streets of Paris: Taking Back What Allah Has Given to Muslims

On December 12, 2010, French politician Marie Le Pen said on Muslims’ praying on the streets of Paris:

"For those who want to talk a lot about World War II, if it's about occupation, then we could also talk about it (Muslim prayers in the streets), because that is occupation of territory."

"There are of course no tanks, there are no soldiers, but it is nevertheless an occupation and it weighs heavily on local residents."

For speaking her mind about a disturbing reality that grips the streets of Western nations, the EU revoked her parliamentary impunity on July 3, 2013 so that she could be prosecuted for hate-crime charges in French Court. 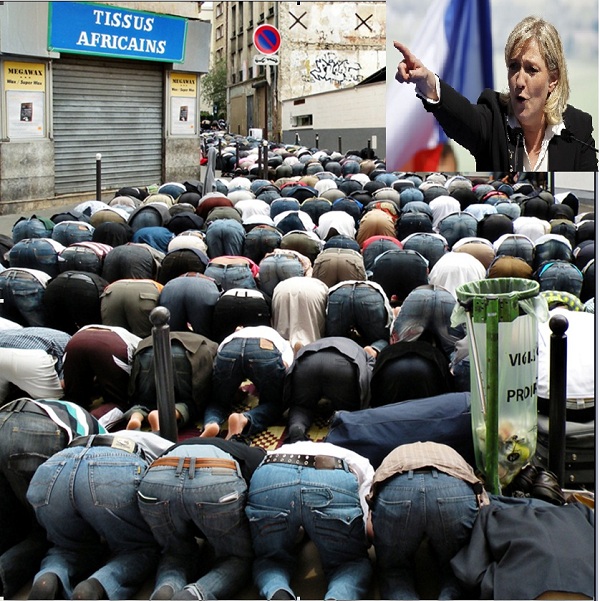 Sajjad Karim, a British Tory MEP on the parliament's legal affairs committee, was among those who voted for the revoking of Ms Le Pen’s parliamentary immunity.

"There is a red line between freedom of speech and inciting racial hatred," he said. "I, along with many other MEPs, today voted to drop Ms Le Pen's immunity and I am confident that the majority of the European Parliament will follow our lead in July."

Marie Le Pen has got it all wrong. The unlawful occupiers of the streets of France, indeed the entire nation of France, are the French kafirs. What she doesn't understand is that everything the world’s kafirs think as belonging to them actually belongs to Muslims. Allah, the creator and owner of the Universe, says exactly that in the Quran (33.27):

"And He made you heirs to their land and their dwellings and their property, and (to) a land which you have not yet trodden, and Allah has power over all things."

In other words, the land and property of the Kafirs, which are still out of the rich of Muslims, has been given to Muslims by Allah. And Allah directed Muslims to capture it:

"Do they see Us advancing, gradually reducing the land (in their control), curtailing its borders on all sides? It is they who will be overcome." (Quran 21:44)

Therefore, Muslims praying on the streets of Paris are not occupiers; instead, they are the rightful owners of the streets. I other words, in order to assert their God-given right to own what the Kafir claim as their own, Muslims must oust the kafirs block by block, street by street, city by city, country by country from their illegal occupation. And they can apply the following Allah-ordained tools for taking back what belongs to them from the Kafirs:

The sentence “They do not forbid what Allah and His Messenger have forbidden” in the above verse means that they do not accept what Islam ordains, i.e. Islam’s divine law or Sharia. So, as per this divine command of Allah, Christians and Jews, who do not follow the law of Islam and reject the religion of truth (i.e. Islam), must be fought relentlessly until they submit to Islamic rule and law and pay special taxes (jizya) Allah has levied upon them.

What better way to re-conquer the streets for Allah than to fill them with tens of thousands of Muslim men. The entire area is paralyzed. Kafirs cannot come into these areas during prayer. Those kafirs, who live there, cannot leave or enter their dwellings.  Many times Muslim guards enforce this sanction. And Muslims are doing the same across other metropolis of Europe, Russia and North America:

Muslims praying on the streets of Paris.

Muslims praying on streets of London.

Muslims praying on Streets of Moscow.

Muslims praying on the streets of St. Petersburg

THE WORLD IS ONE GIGANTIC MOSQUE OF ALLAH

Allah has made praying an indispensable duty upon all Muslims, which they must perform diligently and without delay wherever they be. Indeed, Prophet Muhammad said, the whole earth is one giant mosque for Muslims and they can pray wherever they want:

Therefore, as soon as the time of prayer arrives, Muslims must prayer wherever they are – whether in a mosque, in a hallway or park, on a sidewalk or parking lot, or even on the street. The entire surface of the earth is a prayer mat for them, which entirely belongs to them.

So, Ms Marine Le Pen has a made a grave mistake by boastfully speaking against what Allah, the Lord of the Universe, has made lawful. And opposing Allah has its due punishment, a painful doom, which will start with her facing the French Court.