Muslims sincerely want and need to be following a prophet who models today’s most cherished humanitarian values -- universal equality, civil rights for women, and a faith for all peoples and all times. After all, Islam is now competing in a marketplace of ideologies, some of which actually ensure those values. Unfortunately, it is impossible to reach back into the well-documented history of Muhammad and find those values. So, instead, Muslims have re-written history. Be aware! When Muslims tell you that Muhammad espoused universal equality, equal rights for women, and a “perfected” religion, they may be quoting from a fake “Final Sermon” of Muhammad. Here it is:

Protocols of the Elders of the Muslim Brotherhood

The two best-selling Western books in the Middle East are Protocols of the Elders of Zion and Mein Kampf. Both of these books fuel the anti-Semitism that is endemic in the region. Protocols is probably one of the most boring and ill-conceived books in history. It is basically a digest of 24 evil strategies (protocols) Jews will use to take over the world. After each set of strategies there is a short narrative (“argument”) explaining how that particular strategy will be achieved.

Example: Protocol 10 – Destruction and imperceptible abolition of constitutions melting the government into an autocracy.

Argument: These measures will give us the possibility of eliminating, little by little and step by step, all that which we may be obliged, at the beginning, to introduce into the government constitution, in an endeavor to acquire our rights, so as to bring about, unobserved, the abolition of every constitution and, when the time comes, to merge every function into our autocracy.

These protocols seem so authentic to the Muslim Brotherhood that they were actually written into the HAMAS Covenant of 1988 which says in Article 32:

The Evolution of Muslim Mall Ministries 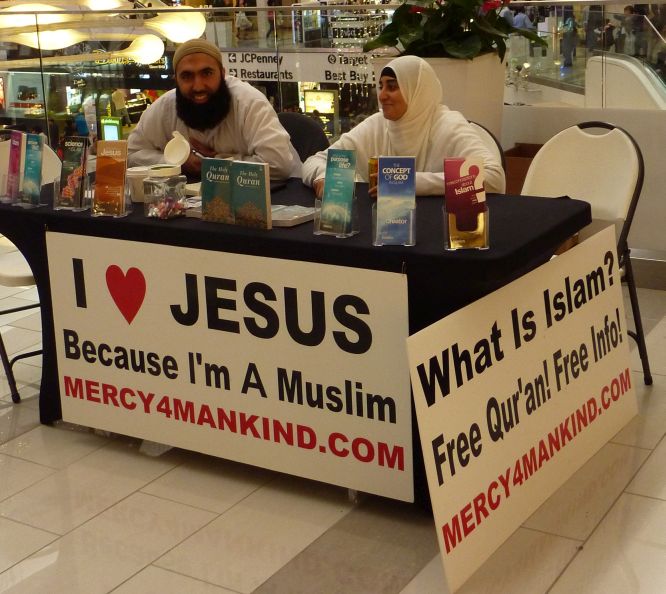 Muslim street preachers and mall ministries are working desperately to connect with the American public. Their dilemma is that when they model their Salafist imams and handlers, they appear too much like the Islamic terrorists we have all come to recognize. Here is a dawah couple in a Los Angeles shopping mall just a couple of years ago.

Of course, the shoppers were scared off because the street preachers looked every bit like Khalid Sheik Muhammad, the mastermind of the 9/11/01 attack on the World Trade Center and the Pentagon, and Samantha Lewthwaite, the “white widow” alleged to have been involved in the 2013 Kenya shopping mall attack which left 67 people dead.

In 2015, another group of mall preachers, dressed in thobes and headgear, offered free Qurans to the shoppers, but there were few takers.

The Dilemma of the Middle Eastern Refugee Crisis

The world is facing the greatest emigration crisis since World War II. Waves of emigrants leaving war-torn Middle East and North Africa have overwhelmed Western countries’ national security apparatus and resources of humanitarian aid organizations. Many innocent people are dying. The generous West has naturally responded: “Let’s do something!”

The West is already doing an inordinate share of the relief effort for truly displaced people who have been driven from their homes by violence and persecution. Where is a similar response from the Muslim Arab Gulf States?

If Muslim countries like Saudi Arabia justify rejecting refugees out of fear of terrorism, why is that concern irrelevant in the West? Where is the Islamic “compassion” and “brotherhood” for those in need? Meanwhile, Germany will be accepting over 800,000 refugees in this year alone.

If you suggest to a Muslim that ISIS represents Islam in its purest form, he/she will protest in the strongest terms possible. Still, ISIS has been able to recruit over 35,000 devout Muslim volunteers from 44 countries around the world. See interactive map.

These volunteers are not Foreign Legion types or former soldiers longing for more action. They are “true believer” Muslims who pray, fast, and try to follow the example of Islam’s prophet Muhammad to a tee. Their flag is emblazoned with the Islamic Shahada statement of faith, similar to the proclamations on the Saudi Arabian, Iraqi, and Iranian flags. ISIS volunteers are willing to sacrifice their lives to see the Islamic Caliphate restored, after being defunct for almost a century.