Brave Pakistani ex-Muslim Firasar Imran – who petitioned to the Spanish government for banning the Quran for its violent and totalitarian ideology and has received many death-threats himself – has now received a letter from the "Ulema Majelis of Indonesia" (Ulema Council Indonesia) and a radical Islamist group, threatening to annihilate his family living in Indonesia. Shown below is threatening email: 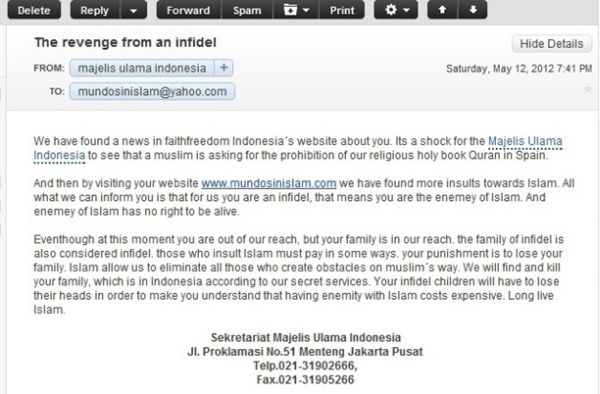 This letter from the nationally respected Ulema Council was followed by another from an Indonesian Islamist group, "Front Pembela Islam" (Islamic Defenders Front), also threatening to kill Firasat's children in Indonesia: 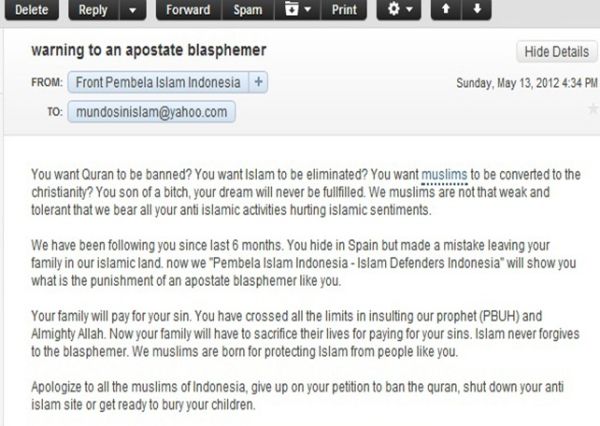 The Islamic Defenders Front has been involved in numerous incidents of violence and murder of Christians and Ahmadi Muslims, as well as attack and vandalism of their places of worship.

It should be noted that Imran Firasat is married to an Indonesian woman, and his family and children live in that country.

Imran is used to threats of violence and murder from Muslims. But this time, with threats to massacre his vulnerable family and children living in Indonesia from a extremely violent and dangerous militant Islamist group, egged on by the respected Ulema Council of Indonesia, he went to the Spanish police in Madrid on May 13 to lodge a complaint. But the police treated him dismissively, refusing to take in complaint and reminded him of lodging complaints in the past too. Police officers blamed him for the threats against his family and children by going against the Islamists. Only when he pleaded that this time the threats were against his vulnerable children living in Indonesia and threatened to report the case to the interior ministry, the police reluctantly filed the complaints, but without mentioning the letters of threat against his family and children. And despite taking in the complaint, the Spanish authorities have done nothing of note, when the threats of massacring his family in Indonesia come from well-known Islamic organizations there.

When he asked for protection, police officers blamed himself for the mess in his life by messing up with the Islamists. When insisted on a solution to ensure the safety of himself and my family, officers said: "Remove your website and stick with the Islamists."

Officers also told him not to come any more for lodging further complaints on the issue, advising him deal with his mess with the Islamists by himself.

It may be mentioned that Imran Firasat's petition to ban the Quran has been accepted for review by the Spanish Parliament.

And despite the threats and these setbacks, says Imran,

"No matter what I will continue fighting until everyone is free of Islam. I can not convince anyone to join but no one can force me to leave my battle for awakening the world about the dangers of Islam and Islamism’s growing threats against the Western world."