"The Burqa Master": An Entertaining Novel on Paradoxical Life of an Iranian Father and Son in UK

“The Burqa Master” novel is here to entertain... 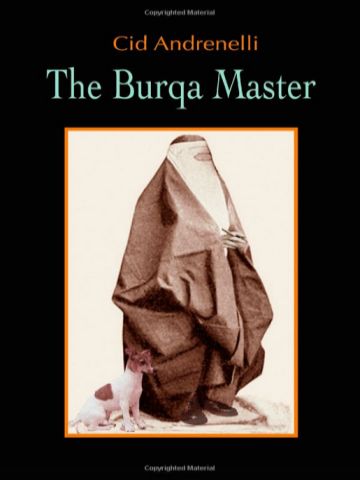 Remembering Tehran, a café, a market of flowers, and a skinny man pushing a cart through the streets selling cigarettes. Be careful what you say in front of the children and don't look to see what’s hanging from the cranes. There was a man who played a santur, all fired up by whiskey; hot nights seeping into dawn where you really laughed and now you’ll never see him again. There was a girl who wore a Papakhi hat and another who smoked cheroots, so many lost friends. You left and you can’t go back.

The Burqa Master is a black comedy telling the story of a father and son who left Tehran. Hamid, the son, is a born libertine and his old man is consumed with guilt and memories of his crimes and punishment.

His father instead sits alone at home; a lonely wizened old man under a large cathedral lamp with one thousand watts, basking in the artificial sunlight dreaming of endless horizons and the past. Yet the old man is eaten away by guilt and memories of his past punishments. He gorges on sweets and lives his life clinging to the Mosque and his faith. Every move, every day is planned and shaped by his addiction to Abjad numerology as he pours over the Koran, searching for the right verse and calculating answers and predictions. Hamid makes fun of the Hadiths and they argue over angels, if numerology is Haram and a hundred other things. In reality the old man loves his numerology more than religion and his hypocritical Islamic behaviour goes from bad to worse after Hamid brings home a stray puppy. He finds a friend at last, declares the tiny dog is permitted as a guard dog and ends up buying a faux leather dog bed with leopard print cushions. This pushes him ever onwards to breaking Sharia law, with the craziest excuses.

Hamid’s ingeniousness knows no bounds either as he devises a plan to advertise 'English lessons' for Muslim housewives. Using his dead mother's burqa as his disguise, he becomes the retiring widow preferring to teach undisturbed and alone in the privacy of 'her' student's bedrooms. Hamid uses carefully recorded English lessons, meticulously planned and timed, with grammar for the warm-up kissing and then him reciting Paradise Lost in an old woman’s voice playing loudly behind the closed doors while having sex.

The old man's son Hamid has become the devil incarnate aided by the Burqa as a means of entry into bedrooms, and putting his lust at the service of women. He cheerfully makes use of the very Islamic rules and observances bought into place to stop such goings on. He’s a Dance Master, an English Master and in the end The Burqa Master.

As for the old man's son-in-law Abbas, he’s the Apostate, the Buddhist, and most of all, the Donkey as he plays the role of Mullah Nazruddin’s donkey to the old man, who becomes each day more like Nazruddin (a Sufi Folk character) with his cryptic sarcasm and esoteric pragmatism as he recounts his own tales. The story ends with the old man’s ascent to paradise to join the non-defecating, non-urinating virgins with pointed breasts that never dangle. But not before downing a bottle of whiskey and declaring that he was never guilty; he was punished for a passion not a crime.

This was originally written as a theatre play, which is included at the end of the novel. Woven into the tales of this truly remarkable Burqa Master are strong messages loud and clear.

"The Burqa Master" novel is here to entertain you. You can read inside the book on amazon.com or if you’d like a free PDF version, you can contact me with a private message through Twitter and I’ll e-mail you a copy.