Review of ‘Muhammad and the Birth of Islamic Supremacism’: An Excellent Movie Script

Sitting at Noble Coffee in Ashland, Oregon, reflecting on the day I had coffee here with David Hayden, author of Muhammad and the Birth of Islamic Supremacism: The War With The Jews 622-628 A.D. As I read that book, I was awed by the tenacity and integrity with which the author had researched for a decade before beginning to write, and I was thrilled to have the opportunity to talk with him about various elements of his studies. 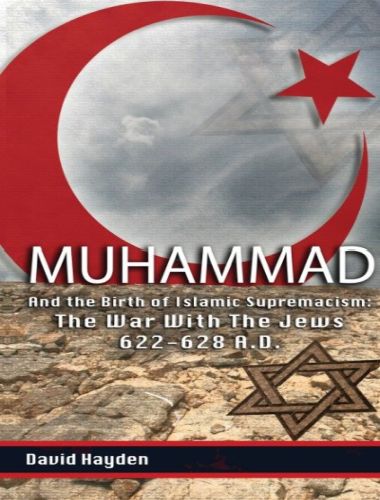 I shared with Hayden a poignant scene that had struck me in the book, when Muhammad had exiled the Banu Nadir Jewish tribe from Medina, and “They departed to the accompaniment of drums and the music of strings. Their wives were decked in festive costumes, and they dazzled the warriors of the Prophet by their beauty and elegance. A people that could not be crushed” (Tor 152). Hayden goes on to quote an article (“The Expulsion of Banu Nadir”) from the All About Muhammad website: “while Muhammad could seize their property, he obviously could not get their souls. An amazing display in the face of a complete defeat” (p. 123). When I read that amazing account of the power of the human spirit, I immediately saw it flash in my mind as a colorful movie scene, and I realized that this very well-written book would be more accessible as a movie, because more people could understand the complex research in a visual way… But when I suggested this idea to the author, he reminded me that no one is allowed to put any images of Muhammad anywhere. In fact, if someone does post an image of Muhammad, they can be killed for it.

Killed for it! Those words certainly stopped my creative imaginings in their tracks! Obviously, if you can be killed for creating an image of Muhammad, then you cannot make a movie about him!

This book is very well thought-out and those with scholarly orientations will enjoy the challenge of using their bright intellects to read this book. And for those who want to understand this topic but would rather read the “Cliff Notes,” my recommendation would be to at least read the last two chapters (14 & 15) and the author’s conclusion at the end of the text. Much can be learned from simply grasping the importance of the slogan “Allahu Akbar” (Allah is the greatest), a belief that was reportedly yelled by Muhammad as the Muslims attacked the Jews of Khaybar in 628, and has been used repeatedly throughout history ever since, including during the September 11th (2001) Muslim jihadist attack on the World Trade Center. That event of 9/11 deeply perplexed Hayden and set him on the journey of research that culminated in this book and in his ongoing blogs.