Motto of Islam: ‘Thou Shall Not Live in Peace and Harmony’ 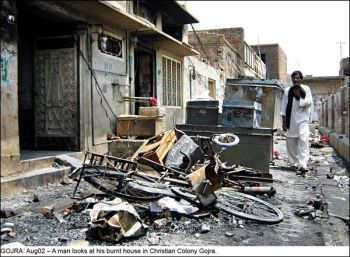 THIS 14th August, Pakistan will be commemorating the 62nd year of running the bloody carnage, which engulfed this region of the subcontinent in the name of its freedom of religious needs and the violence in the name of Islam, which refuses to dissipate.

Yet again, Punjab, the land of five rivers, has witnessed a spate of violence against religious communities, in which seven people were burnt alive, and much property with scores of houses was ravaged, ransacked and looted. After 62 years, the perpetrators and the victims have changed, but the motives with their background remains the same: Thou shall not live in harmony. 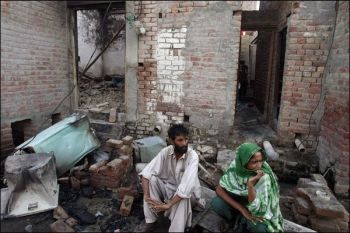 Last weekend around 100 houses were looted, burnt to the ground in and around Gojra in Toba Tek Singh district (a small city in western Punjab). A couple of weeks before this latest incident, dozens of houses were also ransacked and torched in Kasur, while some five months ago, a similar incident occurred in a Christian basti (slum) in Karachi, where about 40 houses were deliberately attacked and the carnage had left the basti-dwellers in complete shock. Some school-going children, deeply struck by the trauma of the terror, are still not able to go to school. 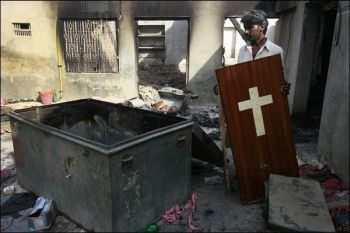 And, in all these barbarous incidents, the perpetrators were from the Muslim community and the victims were hapless Christians. The violence was fueled by a rumor that ‘members of the minority community had desecrated copies/pages of the holy Quran’.

Whatever be the truth of these allegations, the response was shockingly disproportionate, criminal and barbaric.

An 1947-48, Muslims targeted and massacred the Hindus and Sikhs in order to create Islamic Pakistan and ethnically cleanse them from the newly created Islamic State (to which the Hindus and Sikhs belatedly retaliated). Here too, the Muslim mob targeted the Christian community because of its faith. Such shameful behavior—that in 1947 created deep wounds, which it is yet to heal—is still common in Pakistan and becoming all the more common. 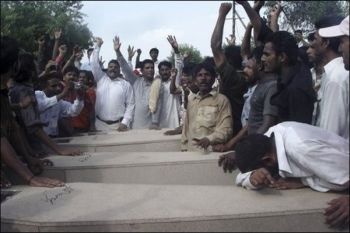 A number of commentators blame the current levels of intolerance—be it between Sunnis and Shiites or between Muslims and Christians or even the Hindus/Sikhs—on the Islamization policies of late General Ziaul Haq. No doubt, Gen Zia instituted the Hudood Ordinances and blasphemy laws, but the root of intolerant sentiments today goes beyond the questionable laws introduced in the Zia era. Even though Muslim-Christian riots invariably involve the issue of blasphemy Law, the central reason for this carnage, which frequently ensues and engulfs entire communities, is not the law alone, but, in general, a belief that violence in the name of Islam is very acceptable amongst Muslim believers. In Islamic Pakistan, none were brought to justice for the 1947-48 massacres (very few in India), nor were the perpetrators of the 1950s anti-Ahmedi riots. Most of the instigators of Shia-Sunni violence also roam free, while the general tone after attacks on the non-Muslim minorities (Christians, Hindus, Sikhs) has always been of ‘forgiving and forgetting’. 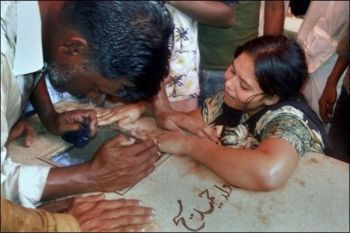 When a major attack on Christians took place in November 2005 in the Sangla Hill violence in Punjab, a committee was put into place to bring communal harmony by involving moderate Muslim thinkers/ politicians/ scholars in writing a full report of the incident for the National Council for Interfaith Dialogue, led by the formidable Fr. Francis Nadeem, representing the Christian side. During these dialogues, many reconciliation sessions/ meetings between its members took place, and the tone of all these meetings was so conciliatory that it would amount to encouraging the same crime. At every meeting/session, it was heard that “next time, we will not do this or that or...” 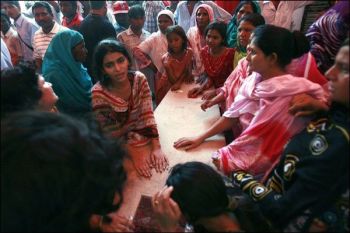 I don’t know to whom the laws of blasphemy were supposed to apply, but the intent was to stop the crime. Tragically, blasphemy cases (allegations/ rumors) have proliferated with time since it promulgation; and actions taken against the accused is most often not by the state but by the vigilantes, maniac Islamic mob, whom the state cannot control. Section 295-B on defiling of copy of the holy Quran says: “Whoever willfully defiles, damages or desecrates a copy of the Muslim Holy book or an extract there from, or uses it in a derogatory manner or any unlawful purpose, shall be punishable with imprisonment for life”. But the punishment has been inflicted without trial on people, who had nothing to do with it.

After great many such hearings, promising next time this and that, I always wondered what these people would do the next time there was such an allegation! If they do not torch their houses, will they just shoot them? Also, why is there always a mention of a ‘next time’? Why should there ever be a ‘next time’? 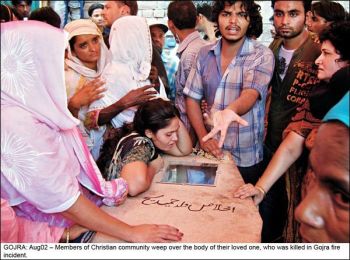 Giving compensation to the victims (which was done in Shantinagar in 1997 and Sangla Hill in 2005) will never solve the problem, since there is always the threat of a ‘next time’, such as occurred in the latest Kasur and Gojra carnages (also compensation offered).

The sense of loss, the fear of another attack and the trust lost can perhaps never be reclaimed, as the victims forever live in perpetual shock and fear of a next time. As long as the perpetrators are not prosecuted to the fullest extent of the law and exemplarily punished, as well as serious measures taken by the government to ensure rapid and decisive response to such events, these incidents will continue to happen. Suspending police officers is only a piecemeal initiative. Prosecution for inciting and perpetrating violence, murder, civil unrest and terrorism are measures, which will exhibit seriousness of the government in tackling this menace.

In addition to the blasphemy allegations, the other thing common to the attacks is that, they have so far been very well-planned. 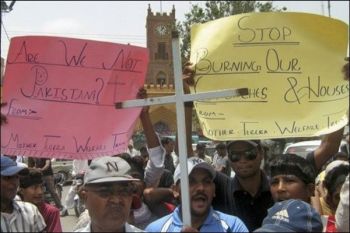 As concerns the recent attacks, it is clear that they have been well-planned, either by local extremists or by national or international Islamic groups, whose interpretations of the religion of Islam is markedly different from that of average Muslim thoughts. The failure of the local administrations, which played the usual silent spectator in all these incidents, is totally inexcusable.

Whatever be motive behind a particular attack, it is clear that Islamic intolerance thrives in its grotesque form in Pakistan. Be it against another religion or sect, this attitude is the larger problem in achieving much hyped-up religious harmony. It also partly explains why adherents of a specific faith, that touts itself as the proverbial religion of "tolerance and PEACE", would torch the homes of those outside their religion.

Some 62 years ago, Pakistan was created, because the Muslims of the subcontinent were not confident that India’s Hindu community would allow them to live in peace with full honour and dignity.

Today, it can be said with certainty that it is not the Hindus but the torch-bearers of Islam—who claim that Islam means “peace and tolerance” and that Allah has sent Islam for the good of mankind—who have not let the adherents of non-Muslim faiths peacefully with a semblance of freedom, honor and dignity.