Epidemic of Acid-Attack on Women in Pakistan

A sample of horror stories of acid-attacks on women in Pakistan...

It has been mentioned in the previous article, Islamic Barbarism: Disfiguring Women by Acid Attack, Part 2, that Pakistan tops the list of incidence of acid attacks on women with nearly 150 incidents of nationally every year of which about 50 occur in Balochistan. A report, entitled “Acid Terrorism Against Women in Pakistan”, dated December 12, 2009, presents some incidents of this horrific crime.

A statement, titled PAKISTAN: Acid attacks continue to be a serious concern, by the Asian Human Rights Commission (AHRC) contains a few incidents of acid attacks with images of the victims in Pakistan (presented below). Behind each one of these pictures lies a painful tale. These are pictures of once lovely women. These faces are no longer and will never be the same again.

In a heart-rending description “My Scars Tell My Story” of the victims of acid terrorism, Talath Naqvi writes:

If on the one hand we get shocked at the criminal violence that exists around us, then on the other hand organisations like DSF (Depilex Smile Again) also give us some hope that benevolence exists in a society where such criminals breed. I cannot fail to be shocked at the capacity some people have for violence. It stuns me that there is perfect planning involved in setting about the stage and this is conceived, only to be followed by the enactment of the sinful deed.

How does one go about buying the necessary equipment prior to carrying out a heinous act? Is it like ordinary folks going out to buy groceries? And in all this time, it is alarming that their conscience doesn't kick in to make them take a step back and comprehend what they are doing.

Recently, I came across 'faces' who gave meaning to the words "a picture is worth a thousand words"... The pictures were heart-rending. What could possibly have led to such horrifying deeds? I could not help but try and trace, at least a part of the story that lay behind the images. Behind each one of these pictures lies a painful tale. These are pictures of once lovely women. These faces are no longer and will never be complete and whole again. 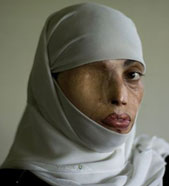 Irum Saeed, 30, is a resident of Rawalpindi. She recalls how 12 years ago, when she was only 17, a boy, whose marriage proposal she had rejected, followed her to her college. The street he chose for the scene of crime was narrow, and Irum was unable to escape his hot pursuit of her. The rejected boy proceeded to throw a jug full of acid on her. As she turned to avoid this, he threw the remaining acid onto her back and shoulders, badly burning them. The photograph was taken at her office at the Urdu University of Islamabad, Pakistan, on Thursday, July 24, 2008. She has undergone plastic surgery 25 times to try to recover from her scars. 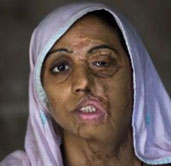 Shameem Akhter's face was mutilated with acid when she was only 17. Now aged 20, she is still unable to comprehend how she fell victim to criminals, who kidnapped and raped her for revenge. Then they left her face mutilated, hoping her appearance would silence her forever and ensure that she would never marry. They have succeeded in destroying her life and much of her spirit. Shameem has undergone plastic surgery 10 times to try to repair from her scars. 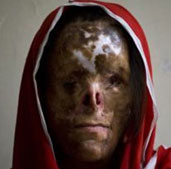 Najaf Sultana, now 16, of Lahore, was burned by her father at the age of five while she was sleeping, apparently because he didn't want to have another girl in the family. The burning left Najaf blind. Abandoned by both her parents, she now lives with relatives. She has undergone plastic surgery around 15 times to try to repair her scars.

Shehnaz Usman, now 36, of Lahore was burned with acid by a relative due to a family dispute five years ago. She has undergone plastic surgery 10 times.

Shahnaz Bibi, now 35, of Lahore, was burned with acid ten years ago by a relative due to a family dispute. She has never undergone plastic surgery. 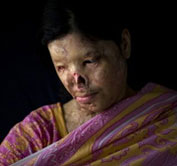 Kanwal Kayum, now 26, of Lahore was burned with acid one year ago by a boy whom she rejected for marriage. She has never undergone plastic surgery. 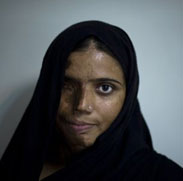 Munira Asef, now 23, of Lahore was burned with acid five years ago by a boy whom she rejected for marriage. She has undergone plastic surgery 7 times to try to heal her scars. 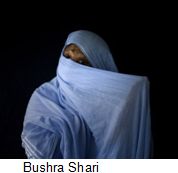 Bushra Shari, 39, of Lahore was burned with acid thrown by her husband five years ago because she wanted to divorce him. She has undergone plastic surgery 25 times. 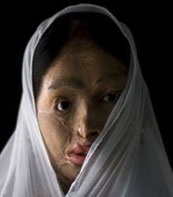 Memuna Khan, 21, of Karachi was burned by a group of boys who threw acid on her to settle a dispute between their family and Menuna's. She has undergone plastic surgery 21 times. 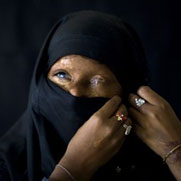 Zainab Bibi, 17, of Islamabad was burned five years ago by throwing acid on her face a boy whom she rejected for marriage. She has undergone plastic surgery several times. 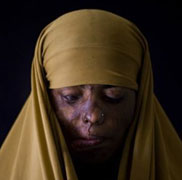 Naila Farhat, 19, of Islamabad was burned five years ago by throwing acid on her face by a boy for rejecting his marriage proposal. She has undergone plastic surgery several times.

The case of Naila Farhat was brought to the Supreme Court of Pakistan in November 2008 and received great publicity. The perpetrator was sentenced to 12 years in prison and ordered to pay Rupees1.2 million in damages. This represented a landmark decisions in dealing with gender violence, but the judgment could hardly stem the menace of acid-throwing. This was also somewhat exceptional case in the landscape of acid attacks in Pakistan. In most cases, measures, if at all taken, are still disproportionately low as compared to the sufferings inflicted by the attacks. 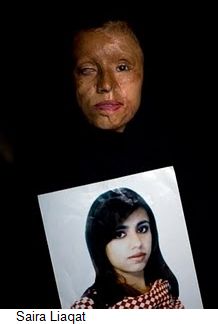 Saira Liaqat, 26, of Lahore was 15, when she was married to a relative. The families had agreed she would join him only after finishing school. But then he demanded her to live with him after the marriage and eventually attacked her with acid when his demand was not met. Saira has undergone plastic surgery 9 times. 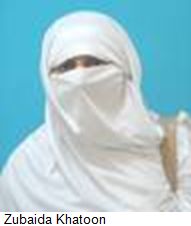 Zubaida Khatoon was burnt by her husband to resolve an argument. Her husband had made it a hobby of frequently marrying women from families to lower economic groups. When she discovered this, Zubaida protested his actions. He tried to settle the argument by setting her on fire after pouring kerosene on her. Raising an objection to his lechery was all needed for her to bear these scars.

Nasreen Sharif, 23, was once a beautiful girl. When she turned 14, her cousin poured a bottle of sulphuric acid on her face as she slept. His excuse was that he couldn't stand other boys whistling at her (because of he beauty) when she crossed the street. She no longer bears any resemblance to that youthful beauty. "My skin melted and my hair burned away. I am now blind, I have no ears and I have no sense of smell", says Nasreen.

Parveen Akhtar, 38, from Jehlum found her life changed when her husband asked her for her written permission to allow him to remarry. Her refusal to it angered him and he tried to murder her by dousing her body with kerosene and setting it alight. He portrayed the incident as an accident and told people that he wanted to remarry because she cannot bear children. 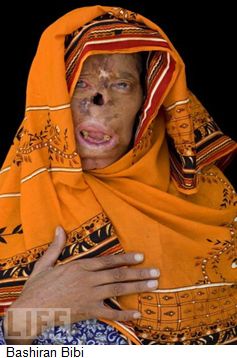 Nearly 25 years ago, newly-married Bashiran Bibi (now 57), a resident of Sukheki, Pakistan, was pushed by her mother-in-law into a coal stove. The family proclaimed it to be an accident. Her husband blamed it on a fit of epilepsy that she suffers from. Resolved to her fate, Bashiran continues to live with her husband and in-laws and gave birth to 5 children after this "accident". Whatever money is donated to Bashiran's cause, her husband uses it for himself and doesn't spend any on her treatment. 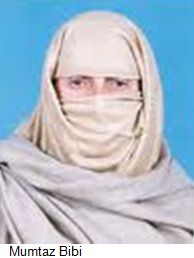 Mumtaz Bibi, 39, from Khairpur, Pakistan, came under her husband's wrath while trying to protect her daughters. Her offence was that she refused to let him selling off her girls, shielding them with her life. Because of her lack of compliance, her husband poured acid all over her body, then proceeded to divorce her.

24-year-old Tasneem Shahzad's story is repeated all too often. A girl, too poor to bring much demanded dowry, she bore the wrath of greedy in-laws. Tasneem's ex-husband was an addict. It was left to her to support her own household as well as that of her extended family. Tasneem worked in several homes to support all those who depended on her. However, that was not pleasing enough for her greedy in-laws. One day, her clothes were set on fire by her rapacious in-laws and she suffered severe burns. They then proceeded to try and prove that the incident was an accident. 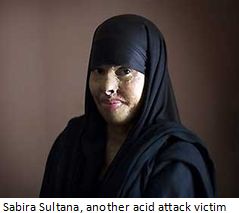 Amidst this grim state of affairs for the unfortunate women of Pakistan, the Asian Human Rights Commission (AHRC) is working to expose the extent of the gender-violence in Pakistan and the misogynist mindset behind it, which is spreading within the Pakistani Middle Class. The AHRC is working closely with acid-attack victims as part of its involvement for denouncing human rights violations across Asia.

The Depilex Smileagain Foundation is another organization, which is working with victims of acid-attack to help them smile again, however impossible a task it may appear: they are trying to make impossible possible. In fact, DSF is working in partnership with the Italian NGO Smileagain Foundation that believes, “There is every possibility that these survivors can manage to live the rest of their lives with dignity, with some help.”

A team of Italian doctors, linked to Italian Smileagain Foundation, visit Pakistan every three months to conduct operations on those victims in an effort to give them back as normal a life as possible.

In September, 2008, the team visited Lahore where they carried out two operations and then proceeded to Multan, where surgeries were carried out in Bakhtawar Amin Memorial Trust Hospital. Some 60 patients were evaluated and 8 surgeries carried out.

The stories from Mutlan were strangely different. This is an area where people have property and the disputes often revolve around inheritance. Here wrath knows no gender. Whereas in other parts of the country it is often women who are burnt by acid or fires, here there are as many male victims as well. Those who have been working with Smileagain Foundation, say that what they have seen in Multan is very similar to what occurs in Bangladesh. Property encourages men to lead an idle life, it leads them to indulge in pursuits of personal pleasure, and when they see a chunk of their means of this blissful idle life slipping away, their greed turns them into violent criminals.

Undoubtedly, the life of misery and horror the victims of acid-attacks have to live on is hard to comprehend. While organizations like Smileagain Foundation works toward giving these devastated victims as dignified and normal a life as possible, let us hope that works of Human Rights groups, such as AHRC, of the media and civil-society groups help expose and discredit the Islam-motivated misogyny that is responsible for the malaise, which only can cure this problem and help restore women as a dignified and equal part of men in Pakistan and any other society.