On February 16, 1996, Al Muhajiroun was formed by Omar Bakri Mohammed as an offshoot from the British branch of Hizb ut-Tahrir, which he had founded in 1986 with a Syrian, Farid Kassim.  Hizb ut-Tahrir is an international Islamist group formed in Jerusalem in 1953 by Muslim jurist Taqiuddin al-Nabhani.  It aims to establish a Caliphate - a pan-national Islamist superstate.  Syrian-born Bakri had gone to Saudi Arabia in 1983, where he set up a group also called Al Muhajiroun. This was a cover for Hizb ut-Tahrir, which is banned in Saudi Arabia.  Bakri was expelled in 1985.  He arrived in Britain, where he became an "asylum seeker".
Bakri was based in Tottenham in North London.  He lived in a house there, provided by welfare, where he and his wife would raise seven children.  Al Muhajiroun had an office in the Lee Valley Techno Park in Tottenham, which also housed the "British Court of Sharia", an entirely unofficial body.  The Lee Valley office was allegedly used to recruit people to join Hamas, Hizbollah and Egyptian Islamic Jihad.
In 2004, six months before he officially disbanded Al Muhajiroun, Bakri gave an interview to a Portugese magazine.  He claimed that in his time in Britain, he had been arrested 16 times, but released without charge on all occasions.  He warned then that a terror attack against Britain was "inevitable", adding: "We don’t make a distinction between civilians and non-civilians, innocents and non-innocents.  Only between Muslims and unbelievers.  And the life of an unbeliever has no value.  It has no sanctity."

The following year, on 7 July, 2005, Bakri’s "prediction" came true and 52 people were slaughtered on London Transport.  The leader of the 7/7 suicide attack cell - Mohammed Sidique Khan - was connected with Al Muhajiroun members.  These individuals, sentenced to life imprisonment on April 30 this year in the Operation Crevice trial, also plotted terror attacks against Britain.  Mohammed Sidique Khan and his fellow suicide bomber Shehzad Tanweer had met Omar Khyam (pictured), senior member of the Operation Crevice convicts, on four occasions in early 2004.
One of these meetings, from February 21, 2004, took place in Omar Khyam’s Suzuki Vitara Jeep.  Sidique Khan asked Omar Khyam: "Are you really a terrorist, eh?"  Khyam answered: "They’re working with us."  Sidique Khan urged: "You’re serious, you are basically."  Omar Khyam replied: "No, I’m not a terrorist but they are working through us."  Sidique Khan said: "Who are? There’s no one higher than you."  Later in the conversation Khyam spoke of travel to terror training camps in Pakistan and warned Sidique Khan: "The only thing, one thing I will advise you, yeah, is total obedience to whoever your emir is... up there you can get your head cut off."
In 2003, Omar Khyam (who used the code-name "Ausman") and Mohammed Sidique Khan (code-named "Ibrahim") had both attended a terrorist training camp in Malakand in Pakistan, near the Afghanistan border.  Here they had trained in the use of explosives, handling Kalashnikovs, rocket propelled grenades and how to extract the deadly toxin ricin from castor oil beans.
In 1999, according to Richard Watson on BBC’s Newsnight - (video here) - Omar Bakri Mohammed wanted to expand Al Muhajiroun’s operations.  He sent an envoy to New York, called Sajil Shahid (pictured).  It was in New York that Shahid, a Dutch/Pakistani, met Mohammed Junaid Babar, whose testimony would later help to convict the Operation Crevice members.
In New York in the mid-1990s, the Queens Islamic Center, based at the Masjid al-Fatima on 37th Avenue, Woodside, had been taken over by radicals from Hizb ut-Tahrir.  The US Hizb ut-Tahrir branch had been set up in Queens in the 1980s by Iyad Hilal.  He recently lived in Orange County, California, before being forced into hiding.
Aqeel Khan, founder and secretary of the Queens Islamic Center, said of these Hizb radicals: "They had their own programs, which were not the directions of the mosque... There were five times (a day) prayer, but then they had their own meetings here and we - the general public - were not invited."  The radicals were officially thrown out after $400,000 had gone missing from mosque funds, but they continued to use the mosque.  It is believed to be here that Junaid Babar met Sajil Shahid. 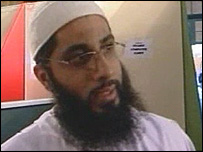 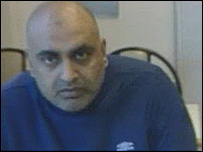 Both Khyam and Salahuddin Amin were in contact with an Arab man named Abu Munthir who had formerly lived in Luton.  Amin channelled funds from Britain to Pakistan.  They were also in contact with a man named Mohammed Quayyum Khan, or "Q" (pictured), who had also lived in Luton.  Q is said to have ordered the 7/7 bomber SIdique Khan to attend the Malakand terror camp.  Q is thought to have strong al Qaeda links.  He had been followed by MI5 since March 2003, and the Crevice group was first identified as a result of these inquiries.  Q’s home was searched in Luton, but he was never charged.  It has been said at the recent trial that he is the real leader of the Crevice team.
Salahuddin Amin, aged 32, had left his home in Luton, Bedfordshire, shortly after 9/11 to live near the borderlands of Pakistan, where he ferried funds to jihadists.  Amin claimed in court that the funds were for Afghan refugees.  In 2003, he had greeted Omar Khyam and on a separate occasion Mohammed Sidique Khan when they flew in from Britain.  A video of some of Amin’s police confessions can be found here.

In the summer of 2003 Babar had gone with the four to the training camp in Malakand.  There they were shown explosives techniques, and tried out their own bombs from ammonium nitrate.  Of two tests, one succeeded.  After this they returned to Lahore.  Babar had stolen five computers from his employers, PSEB.  He gave three of these to the British Muslims.  They rented rooms in Soofi House (pictured), 13 Ilyas Street in Lahore.
Another lodger at Soofi House that summer had been the 7/7 suicide bomber, Mohammed Sidique Khan.  The raucous behavior of the British Crevice group led to neighbors calling police. The Pakistan intelligence agencies found out that the men had gone to Malakand for training, and they informed MI5.
According to Hassan Butt, Babar had attended a fund-raising event for the Malakand training camp in Hendon, north London, in 2002.  Babar’s testimony confirmed that he attended such an event.  Hassan Butt, who was stabbed and beaten in April this year for denouncing Muslim violence on CNN, said that Mohammed Quayyum Khan or "Q" had been in attendance.  Known as the "Bashful Dwarf" by MI5 agents, Q has gone into hiding.
When Hassan Butt returned to Britain in December 2002, he was detained by police and questioned, but never charged.
Sajil Shahid, who had run Al Muhajiroun’s Pakistan operations, was imprisoned with his brothers Adil and Sohail by the Pakistani authorities for three months in October 2004.  Upon his release in January 2005, Sajil Shahid was expelled from Pakistan and came to Britain.  In July 2006, while London mourned the victims of 7/7 on the first anniversary of the attacks, the Islamist Mohammed Sawalha held an exhibition celebrating Islam.  This Islam Expo, held at Alexandra Palace in north London.  Here Sajil Shahid had a stall, promoting Islamic computer games.
In Britain, the authorities seemed to be in denial of the jihadist "conveyor belt" in Pakistan, despite open statements from Al Muhajiroun members such as Abdul Raheem Saleem, aka "Abu Yahya".  In September 2001 he said that he had attended training camps in Afghanistan and Pakistan, and had met Taliban members.  No action was taken.  Abu Yahya took part in the infamous February 3, 2006 demonstration in Sloane Square, where placards called for the beheading of "those who insult Islam", and was found guilty of "inciting racial hatred" on February 1, 2007.
Omar Bakri Mohammed had been portrayed in the media as a clown, partly as a result of a documentary by Jon Ronson for Channel 4 TV, aired on April 8, 1997, entitled "Tottenham Ayatollah".  Bakri also contributed to this buffoonish image.  While handing out leaflets condemning homosexuality in 1996 he told passers-by in Holborn: "Be careful from homosexuality!  It is not good for your tummy!"  When this tactic did not attract people to take his pamphlets, he turned them upside down and cried out: "Help the orphans! Help the orphans!" - a strategy which drew more interest.
From 2000 onwards, the message of Al Muhajiroun’s malevolent intent toward Britain and its troops was self-evident.  Members of the group were frequently engaged in incidents of public disorder, and their anti-Semitism was obvious.  In early 2000 Al Muhajiroun displayed posters in British universities saying "The last hour will not come until the Muslims fight the Jews and the Muslims kill the Jews."  The phrase comes from a Hadith by Sahih Muslim.  In May 2002 London Al Muhajiroun member Iftikhar Ali was convicted of having distributed "threatening, abusive or insulting" material in October, 2000, with the intention of stirring up racial hatred. His leaflets had stated: "The Jewish people must die."
The British authorities seemed more interested in the activities of Abu Hamza, the radical preacher at Finsbury Park Mosque.  Hamza was a friend of Omar Bakri Mohammed.  His sermons had been heard by Zacarias Moussaoui, the "20th man" in the 9/11 conspiracy, and also shoe-bomber Richard Reid.  British intelligence agents had an informer placed at the mosque, who would later claim that they failed to take his reports about Hamza seriously.
Al Muhajiroun members acted as if there were an "agreement" or truce between themselves and the UK.  As long as the authorities did not interfere with them, there would be no terror attacks on British soil.  They called this agreement a "Covenant of Security". As long as Al Muhajiroun’s terrorist operations happened offshore, MI5 and the Blair government seemed not to care about the group’s activities.  In 2005, immediately after 7/7, former Al Muhajiroun members announced that the "Covenant of Security" was over.

To be continued in part three >>>