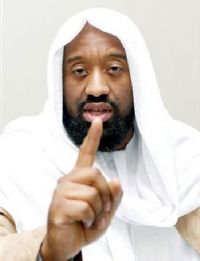 Abu Izzadeen's Arabic name means "Might of the Faith". He was born on April 18, 1976, in the Mother's Hospital in Lower Clapton Road in Hackney, east London. He was brought up in a Christian family of Jamaican origins, where he had the name Trevor Brooks. In 1994, the day before his 18th birthday, he became a convert to Islam. He changed his first name to "Omar". A trained electrician, he became a radical Muslim after he met Omar Bakri Mohammed at the notorious Finsbury Park Mosque, and joined Bakri's Islamist group Al-Muhajiroun.

Izzadeen has been drawing media attention to himself for some time. A video from 2004 which showed him preaching in Regents' Park Mosque was recently broadcast on British TV. He said: "He who joins the British Army, the American Army, he is a mortal kaffir and his only hukum (punishment) is for his head to be removed. Indeed, whoever changes his deen (Muslim code of life); kill him."

In May, 2006, he told Asharq Alawsat newspaper: "It is haram (religiously prohibited) to join the armies of secular regimes," because "military service under those regimes contradicts Walaa and Baraa (sincere loyalty to Islam)."

On Saturday July 2, 2005, five days before four suicide bombers killed 52 people on London Transport, Izzadeen said to a group of followers that Muslims must "instill terror into the hearts of the kuffar (non-Muslims)." He also said: "I am a terrorist. As a Muslim of course I am a terrorist."

At that time, Izzadeen was a leader in the groups the Saviour Sect and Al-Ghurabaa, whose core memberships were formerly Al-Muhajiroun members. The groups had been established after Al-Muhajiroun had been officially disbanded in October, 2004. Izzadeen said then that he did not wish to die sleeping in bed "like an old woman". He said: "I want to be blown into pieces with my hands in one place and my feet in another."

Izzadeen's open support for killing was first documented in 2001, before the 9/11 attacks, when he was filmed in a park in East Ham, east London. His face was entirely wrapped by a red and white keffiteh (an Arabic headscarf like a tea towel). He said then: "Because I believe America is one of the places where we should be bombing those...er, the Government. There are some Muslims that go to America, because obviously, you know, like firearms is [sic] available inside America, to be trained legally. So why not take that opportunity to use the heart of the enemy that's attacking us."

Izzadeen claimed in July 2005 to have spent seven months in Pakistan and Kashmir. Many members of Al-Muhajiroun had gone abroad to undergo jihad training, and after 9/11, many were assisted to fight coalition forces in Afghanistan. These recruits were aided by Hassan Butt from his base in Lahore, Pakistan. Butt was an Al-Muhajiroun member, who also had contacts with Mohammed Sidique Khan, the leader of the 7/7 cell, and also Mohammed Junaid Babar from Queens, New York, who pleaded guilty to aiding Al Qaeda on June 2, 2004.

After the 7/7 suicide attacks, Izzadeen allowed himself to be filmed by BBC's Newsnight team. The show aired on August 1, 2005. Talking to Richard Watson, Izzadeen played down his experience of jihad training, but his words were chilling enough to be aired by US networks.

He said: "Osama bin Laden, excuse me, Sheikh Osama bin Laden, he offered to the British public, and the European people at large, an offer of ceasefire. He said that if they rose up against their governments, brought their troops home, he promised not to attack them. But unfortunately the stiff upper British lip became hardheaded, and we saw what took place on 7 July."

Izzadeen refused to condemn the 7/7 murders, saying: "I would never denounce Muslims". He described the suicide attacks as "Mujahideen activity".

"Vulnerability, I believe it's a weakness as long as understanding. What would I say about those who do suicide operations - or martyrdom operations - 'cause suicide is a term coined by the media - they're completely praiseworthy. Martyrdom operations are commonplace - fifteen every day in Iraq... Against the British and Americans every day in Afghanistan, all around the world, in Palestine. So it's not something that's unusual. What's shocking, for many, is that it took place on their own doorsteps. But hopefully, that will make many, wake up, and smell the coffee..."

He continued: "I believe many people say you shouldn't negotiate with terrorists. It's a common theme, put in the media. But I'm sure, if you asked those who passed away on the 7th of July, should we negotiate with terr- Osama bin Laden, I'm sure they'd say 'Yes'. To bring their lives back, to save themselves from the burning inferno underground, they would have said, 'Let's negotiate'."

"There's always a clash of civilizations, there's always a clash of ideals. And because Islam is not written by a man, I can't change it. But because democracy's written by a man, they can change it to accommodate the Muslims. I'm born here. I have the right to call for Islam, wherever I am. And that's a problem for the British society and establishment; that the community here, the new generation of Muslims, are born in the UK. We have a British passport, and British citizenship but our allegiance is only to Islam."

When asked where his allegiance lay, with Britain or Islam, Izzadeen responded: "There's no issue of first and second. I have no allegiance to the British queen whatsoever and to the British society - in fact, if I see Mujahadin attack the UK, I always stand on the side of the Muslims - NEVER against the Muslims... Never!  Even if my own family was to be suffered [sic] inside attacks, because we always stand with the Muslims, regardless of the consequences."

He said: "If the British public don't like Shariah, it's going to be over their noses, whether they like it or not. It's going to be over Tony Blair's nose and George Bush's nose as well - and for your information - the British government knows that. That's why they're so terrified of Islamists. I don't believe in freedom. Because freedom's an absolute term. And your freedom encroaches on my freedom. We don't believe in freedom as Muslims. We believe we are, and every action is, restricted with the Shariah rules.... "

When Richard Watson said that he himself did not want to live under Sharia law, Izzadeen quipped: "You don't want to live in a Shariah? Well, when it comes, I'm sure you'll change your mind!" Then he laughed.

A segment of footage which had been taken in the lead-up to the general election of May 5, 2005 was aired by Newsnight. During this election, the leftist carpet-bagger George Galloway was standing as the Respect Party's candidate for the constituency of Bethnal Green and Bow. Even though Galloway later won the election, relying upon the "Muslim vote", members of Izzadeen's Saviour Sect challenged him. Izzadeen is heard saying: "We're going to follow you. We're going to follow you George. Hey! Georgy Boy! You're frightened. You're a frightened man! I thought you was a champion! You're a coward!"

The BBC refused to hand over its footage to the Metropolitan Police. The Crown Prosecution service was debating whether to prosecute Izzadeen and another man shown on the film (Abu Uzair), on the grounds of incitement to treason, solicitation of murder and incitement to withhold information known to be of use to police.

Lord Goldsmith, the Attorney General, and Kenneth Macdonald, the Director of Public Prosecutions had a meeting in early August, to discuss the possibilities of prosecuting Uzair, Izzadeen and Omar Bakri Mohammed. Though awaiting an angioplasty operation, Bakri fled the country, and was subsequently barred from re-entry. Izzadeen and Uzair, both born in Britain, could have been prosecuted under the Treason Act of 1351, but no charges were brought.

The Saviour Sect changed its name to the Saved Sect after the Newsnight broadcast and an expos?? by the Sunday Times. They continued to denounce George Galloway and even issued a fatwa against soccer. Perhaps bolstered by the knowledge that he had escaped prosecution, Izzadeen continued to preach hatred and treason.

On Sunday July 2, 2006, five days before the anniversary of 7/7, Izzadeen appeared at a community center in Small Heath, Birmingham. He described the 9/11 tragedy with contempt. He said that the attack upon the World Trade Center ???changed many people???s lives... Especially those inside."

Birmingham City Council owned the center, and launched an investigation into why he was allowed to lecture on its premises.

In part two of this series on Abu Izzadeen, you will read the chilling words of his lecture, and you will understand for once and for all why it is impossible to negotiate with such monsters.