Cordoba cathedral in Spain is situated inside a complex that used to be a mosque. The mosque itself was built upon the remains of a church which had been destroyed by the invading Moors. It is currently the subject of a third attempt by Muslims to allow it to be used as an Islamic place of worship.
History
The Christian church of St Vicente was built by the Visigoths in the 5th century. The church was built upon the site of a pagan temple to the Roman god Janus, the deity of past and present, whose two faces simultaneously looked back and forward. In 711, the church of St Vicente became used as a mosque. The church was finally demolished in 786 by Abd al-Rahman 1, who used much of the church's materials in constructing a new mosque. The mosque built by Rahman was expanded three times, with the final enlargement made in 988 by Al-Mansur.
Al-Mansur was a despoiler of Christian places of worship. He went to Santiago de Compostela, and had his horse drink from the Cathedral there. He had the massive bells of its Cathedral dragged from Santiago 500 miles to Cordoba. Here the bells of Santiago were melted down to be made into oil lamps for his pet project, the Cordoba mosque.
In 1236, Cordoba was conquered by Ferdinand of Castile and was re-consecrated as a Christian site of worship. Ferdinand III ordered that the oil lamps be transported back to the shrine of St James at Santiago, where they were melted down to become made into bells again.
Alfonso X built the Villaviciosa Chapel inside the mosque complex using Moorish craftsmen, and the Royal Chapel was built. In the 14th century, Enrique II had the Royal Chapel (Capilla Real) rebuilt.
In 1523, it was decided by the Catholic Church, supported by King Carlos V, to erect a cathedral inside the center of the Cordoba mosque complex. An area of the mosque was hollowed out and a cathedral nave was erected. This became continually expanded with more elaborate features. Choir stalls, built with mahogany from the New World, were carved by Duque Correjo in the 18th century.
The Cathedral inside the mosque complex (known as the Mezquita) is comparatively small, with only places for 1,000 worshippers inside. 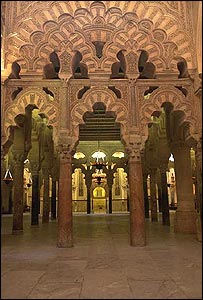 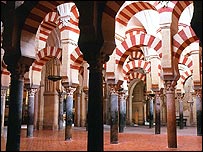 The Current Petitions
And now, once more, political Islam in Spain is trying to assert itself. The trial of the Moorish terrorists and their accomplices who attacked Madrid is due to start in the New Year. On Tuesday December 26, only a day after Spain celebrated Christmas, the birth of Christ, Spain's Islamic Commission announced that it had decided to petition the new Pope, Benedict XVI, to allow Muslim worship at the Mezquita.
In December, a conference of Spain's Catholic Bishops released a statement in which it said it "did not recommend Muslims to pray in any way inside the Cathedral."
Mansur Escudero, secretary-general of the Spanish Islamic Commission, complained that Muslim worshippers at the Mezquita are still being prevented from praying. He said: "There are reactionary elements within the Catholic Church, and when they hear about the construction of a mosque, or Muslim teachings in state schools, or about veils, they see it as a sign we are growing and they oppose it."
The same group of Muslims led by Mansur Escudero had written a letter to the socialist premier of Spain, Jos?? Luis Rodr??guez Zapotero. In that letter, they stated: "What we wanted was not to take over that holy place, but to create in it, together with you and other faiths, an ecumenical space unique in the world which would have been of great significance in bringing peace to humanity. We (Spanish Muslims) would like to share with you (the Catholic community) a prayer, that could serve to awaken the conscience of Christians and Muslims and prove that it is possible to bury past confrontations."
The letter made reference to Pope Benedict's recent visit to Turkey, and how the Pope had prayed in the Blue Mosque in Istanbul.
While Muslims are seeking to exploit the issue of the Mezquita to their own political advantage, there are also plans to build a giant mosque in Cordoba, plans announced earlier in December. The proposal has been backed by Saudi Arabia and other countries. First put forward in 2003 and again in 2005, the request was turned down by Cordoba City Council.
The group behind this proposal is the same Islamic Commission which is trying to undermine the Catholicism being practiced at the Mezquita in Cordoba. As well as planning to build a giant mosque, it also wants to erect a "multi-purpose center" in the city, near its headquarters and also the al-Morabito mosque.
With all the complaints by Cordoba's Muslims (who number no more than 1,000) that there are not enough places where they can worship, Andalusia already has 100 mosques.