In April I described the mounting crisis that was then starting to engulf Pakistan (parts one, two and three). At that time there were problems with Islamist radicals in Islamabad, the capital, protests across the country from lawyers against Predisent Musharraf, and in North-West Frontier Province the Pakistani Taliban were flexing their muscles and intimidating those not deemed "Islamic" enough. In all these areas the problems remain, but they have become worse.
The Lal Masjid (Red Mosque) in Islamabad has a compound containing two madrassas (Islamic seminaries), called the Jamia Hafsa and Jamia Fareedia. Students from these seminaries had occupied the only children's library in the capital since January. The head imam at the Lal Masjid, Abdul Aziz, had threatened that any interference with his students would be met with a campaign of suicide attacks across Pakistan. Many of his students came from the troubled North-West Frontier Province (NWFP) which borders Afghanistan, and while the Lal Masjid students attacked stores selling Western DVDs and CDs in the capital, similar actions were being taken in NWFP.
On March 26, students had kidnapped three women and a six month old child, and held them hostage, tied up with rope. The kidnap victims were accused of running a brothel and were only released three days later when they publicly recanted their "immoral behavior". On March 27, when police tried to arrest two female madrassa teachers as they went to work, armed students kidnapped two policemen. The policemen were released the following day. In April, the Lal Masjid established a "sharia court" in the complex.

On April 9, the first fatwa of the Lal Masjid sharia court was issued - targeting a woman member of the government. Tourism minister Nilofar Bakhtiar was accused of "lewd conduct", after she had been photographed being hugged by a paragliding instructor in Paris. Ms Bakhtiar had been raising money for victims of the earthquake of October 8, 2005, which had killed thousands. On May 20 Bakhtiar succumbed to pressure and resigned as tourism minister. She had been forced to resign from her post as head of the women's league within her party, the Pakistan Muslim League (PML-Q), earlier in the month and had also received death threats.
Negotiations were made with the Lal Masjid leaders by politician Chaudry Shujaat Hussain, at the behest of President Musharraf, but the mosque leaders refused to tone down their public demands for nationwide sharia law. Threats of suicide attacks continue to be made. The Lal Masjid has 2,500 students at two madrassas - the Jamia Hafsa and the Jamia Fareedia. In 2005, after the London 7/7 bombings, there was a crackdown on extreme madrassas. The Lal Masjid showed then that it would react violently to interference from the authorities. When police tried to enter the mosque complex (without removing their shoes) there were violent clashes, in which 35 girl students were injured. 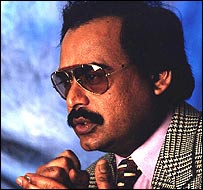 There are two large parties in Pakistan's National Assembly which support President Musharraf - the PML-Q which was established by the president in 2001, and the MQM - the Muttahida Qaumi Movement. MQM has 48 seats in the National Assembly. The MQM was established in 1978 in Karachi, largest city in Pakistan, in Sindh province in the southeast of the country. Though avowedly secular, and an advocate of equal rights for women, the party has been linked to acts of terrorism and violence in Karachi. The party's leader, 53-year old Altaf Hussain, has been based in Edgeware in northwest London since 1992. He claims to live in Britain because of fears of assassination in Pakistan. He has been granted British citizenship.
On May 12, there were riots in Karachi, in which up to 40 people were said to have been killed. The riots happened after Hussain ordered his supporters in the city to support Musharraf's decision to suspend Chief Justice Iftikar M Chaudhry. Supporters of Benazir Bhutto's PPP, clashed with MQM members, and shots were fired. The rioting lasted for an hour. MQM was condemned by the PPP and also the Islamist parties of the MMA for instigating the rioting. Mohammed Anwar, the London-based senior coordinator of MQM stated: "We were the only party in the city that had permission from the authorities to hold a rally in the city on Saturday, so why would we shoot out own supporters?" He blamed the MMA and PPP for starting the violence, saying: "It is the death squads of these parties who were responsible for the carnage, and nothing to do with MQM."
The Pakistan Tehrik-e-Insaf (PTI), a party founded by cricketer and former playboy Imran Khan, announced its intention to sue the British government for "harboring" the leader of the MQM. A coalition of opposition parties, including the PTI, PPP and MMa announced that they would be making a legal challenge against Blair's decision to grant Altaf Hussain citizenship. The head of the MMA, Qazi Hussain Ahmad, has demanded that Altaf Hussain be extradited to Pakistan. It should be noted that Qazi Hussain Ahmad is a suporter of the Taliban and has frequently praised Osama bin Laden. The MQM released a video last week, apparently showing PPP guards opening fire on demonstrators.
Altaf Hussain stands by his support of the President. He said: "Because of activities next door in Afghanistan as well as our own country, the Taliban is growing very strong. He is doing his level best to fight these groups. Musharraf is a very brave man. Only he can prevent the Talibanization of Pakistan."
The internal intrigues of the squabbling factions within the National Assembly are insignificant compared to the very real threat of the country descending into the clutches of a Taliban-style regime. The march of Islamization is quickening its step, assisted by a general dissatisfaction with Musharraf.
On Wednesday May 23, a report by the Washington-based Center for Public Integrity announced that of all the countries in the "war on terror" alliance, Pakistan was the largest recipient of funds, gaining about $200 million per quarter. The Coalition Support Fund donated more than $3 billion to Pakistan between 2002 and 2006.
There may be reasons to question the size of these sums, but as Pakistan is a nuclear power, the need to keep the nation out of the clutches of Islamofascists is paramount. As I will describe in Part Two, even though Musharraf has made moves to counteract the threat of both Al Qaeda and the Taliban, the threat of large parts of the nation being taken over by the current movements for Talibanization is becoming increasingly real.