In an earlier article on Islamism in UK universities, parts one and two detailed some of the activities of Al-Muhajiroun (the emigrants). Founded in London in February 1996 by Sheikh Omar Bakri Mohammed as a radical offshoot of Hizb ut-Tahrir, this group wished to establish a Caliphate, a system of centralized Sharia rule.

Al-Muhajiroun was officially disbanded in October 2004, but it has continued under other names. Right from its start, the group had intentions to be "international". In this, it has succeeded. It established a foothold in the United States, and had a base in Pakistan. Even though the parent group has been abolished, its members continue to promote its message of jihad both in Britain and North America.

The group encouraged Muslims to engage in armed jihad against the United States' interests. One member of Al-Muhajiroun in the US was Lebanese-born Zakaria Mustapha Soubra. During a two-year stay in London, he joined the group and its leader, Omar Bakri Mohammed. He then went to the United States, where in 1999, he set up a branch of Al-Muhajiroun in Phoenix, Arizona.

On July 10, 2001, FBI agent Ken Williams sent a memo, in which he said that there was an "inordinate number of individuals of investigative interest" who were learning how to fly in Arizona. His memo was sent to four individuals in the Radical Fundamentalist Unit and two at the Osama Bin Laden Unit, and two other FBI agents at the New York Field Office.

Williams' memo focused on Soubra, who had first come to his attention in 2000 as a result of Al-Muhajiroun's links to the Islamic Army in the Caucasus. Russian intelligence knew that Al-Muhajiroun was sending fighters to Chechnya. The sub-heading of Williams' 2001 memo was "Osama bin Laden and Al-Muhjiroun supporters attending civil aviation universities/colleges in Arizona."

Soubra was then attending the Embry Riddle Aeronautical University in Prescott, Arizona, where he was studying aeronautical safety. He was a vociferous denouncer of US foreign policy, and his extreme views led him at one stage to be evicted from the Tempe mosque. Williams would later claim that one of Soubra's associates in Arizona was a Saudi called Hani Hanjour, who had first arrived in Phoenix in 1996. Hanjour twice attended flight classes at CRM Flight Cockpit Resource Management in Scottsdale, but had dropped out twice. On 9/11, 2001, Hanjour is believed to have been the hijacker piloting the plane, United Airlines Flight 77, as it plowed into the Pentagon at 9.37 am, killing 189 people, including 125 on the ground.

On May 23, 2002, Soubra, the son of an imam, was arrested as he left the Tempe mosque, for a visa violation. Questioned on several occasions while in detention, he was eventually deported to Lebanon in May 2003. Soubra denied knowing any individuals connected with 9/11, and said he condemned Osama bin Laden and the deaths of civilians. 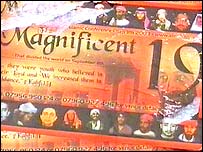 This position for an Al-Muhajiroun leader is typical. The group has produced posters celebrating 9/11, calling the hijackers the "Magnificent 19" and eulogizing bin Laden.  But when placed under a spotlight Al-Muhajiroun members, like their leader Omar Bakri Mohammed, maintain that they denounce violence.

Al-Muhajiroun recruited fighters for Chechnya and Afghanistan. The group had links with Abu Hamza, but one British-based group of Al-Muhajiroun members planned serious damage in Britain. They were closely linked to two individuals from North America, Junaid Babar and Mohamed Khawaja. 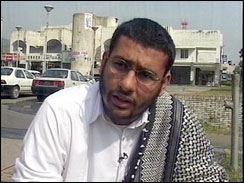 Babar was arrested in New York by the NYPD/FBI Joint Terrorism Task Force in April 2004. When he was arrested in New York, he was on his way to a taxi-driving class. His arrest coincided with arrests made in London and Canada. 29-year old Junaid Babar lived in Queens, New York, where a small group of Al-Muhajiroun members had made their base. This group continued to hold closed meetings and study centers at a mosque in Jackson Heights, long after Omar Bakri Mohammed announced in late 2004 that Al-Muhajiroun had officially disbanded. The meetings in Jackson Heights were led by an older cleric, known as Sheikh Choudary.

In 2005, the youth branch leader of Al-Muhajiroun in Queens was named as "Abu Yousuf", a US citizen. Yousuf was taking a course in computer studies at City University of New York, and frequently gave lectures around New York, which were generally hosted by the Muslim Students' Association.

Junaid Babar's mother had been in the World Trade Center when it was attacked on 9/11, and had survived. Babar had become an American citizen and had spent his formative years in New York. Barely a week after 9/11, Babar left the United States, not returning until March or April of 2004. His activities in Pakistan, where Al-Muhajiroun also had a base, show his commitment to terrorism and jihad.

Babar declared in November 2001 during an interview for Canadian television, while he was based in Pakistan: "Yes, I am willing to kill the American soldiers if they enter into Afghanistan with their ground troops." Speaking of his relationship to the country of his citizenship, he said: "I did grow up there. But that doesn't mean my loyalty is with the Americans. My loyalty will, has always been, is, and forever will be with the Muslims."

Arriving in Pakistan, he stayed in the office of Al-Muhajiroun in Lahore, Punjab province, for a month. He then rented an apartment in Muslim Town, a district of the city, finally buying an apartment in Lahore. He later claimed that he had been given money and instructions to go to Pakistan by Al-Muhajiroun. From April to December in 2002 he worked for the Pakistan Software Export Board, and at internet cafes, he made email communications with a Canadian of Pakistani descent, Momin Khawaja.

On March 30, 2006, Junaid Babar admitted involvement in two plots to assassinate Pervez Musharraf, the Pakistani prime minister. The first was to have taken place in early 2002, and the other in late 2003. He had bought eight AK-47 machine guns, 5,000 rounds of ammunition and grenades for the 2002 assassination attempt. He had made a trip to London in November 2002, to raise money for jihad in Afghanistan, and then returned to Pakistan.

While in Pakistan, Junaid Babar maintained links with the United States. In June 2003, he arranged to have bomb training equipment sent from the US. Sent as personal baggage via an international courier service, this equipment was seized by the Pakistan authorities. He visited London again in February 2004. Here he met Mohammad Momin Khawaja, who had arrived from Canada, and also Haroon Rashid Aswat.

Aswat is thought to have been involved in the formation of Al-Muhajiroun, He is still sought on an extradition order by the United States for plotting in 1999 to establish a jihadist training camp in Dog Cry Ranch in the hamlet of Bly, 50 miles east of Klamath Falls, in Oregon. This plan had been undertaken by Abu Hamza, currently in jail in Britain for soliciting to murder, and also James Ujaama and Oussama Kassir. Ujaama, a resident of Seattle, pleaded guilty to conspiring to support the Taliban on April 14, 2003.

The Oregon terror camp was proposed, it has been suggested, because the landscape was similar to that in Afghanistan. Here US and British Islamists were to be trained for jihad. Aswat, from Dewsbury in West Yorkshire, was at one stage thought to have been the mastermind of the London bombings of July 7, 2005. After these had taken place, he had fled to Zambia, where he was arrested and returned to Britain. Former Justice Department prosecutor, John Loftus, asserted that Aswat had been initially hired as an agent by MI6, Britain's overseas intelligence services.

Junaid Babar was involved with other Al-Muhajiroun members in Pakistan. On June 2, Babar pleaded guilty on five counts of conspiring to provide material support to terrorists, and providing this support. He admitted providing night-vision goggles, waterproof clothing and money to a senior Al Qaeda official who was based in South Waziristan in Pakistan's North-West Frontier Province. He had sent items to this man via an intermediary in 2003, and in January and February 2004 he had delivered the items himself.

He told the New York court: "I set up a jihad training camp where those who wanted to go into Afghanistan where they could learn how to use weapons, and also, you know, any explosive devices that they wanted to test out over there."

The training camp lasted for three to four weeks in July 2004. He also admitted being involved in a bomb plot in Britain. This had been developed from December 2002 until March 2004.

On March 29, 2004, Momin Khawaja was arrested at his home in Fallingbrook, Orleans in Ontario. The following day, March 30 2004. six Britons, who were Al-Muhajiroun members, were arrested. A seventh man from the group, who was in Pakistan, handed himself over to the authorities there, and was later retuned to Britain. A cache of 600 kilograms (1,320 lb) of ammonium nitrate fertilizer had been recovered from a storage depot in Hanwell, West London.

Intelligence agents in Canada, Britain, the US and Pakistan had cooperated in surveillance of the group. Momin Khawaja, the first person to be tried under Canada's anti-terror laws, still awaits trial. The seven Britons appeared at the Old Bailey on March 22 2006, charged with plotting a series of bombings. Their trial is still continuing. At the beginning of their trial, Junaid Babar, who had agreed to cooperate with US authorities, was flown to Britain under tight security, and gave evidence at the Old Bailey. Six of the seven on trial took part in training camps in Pakistan.

Momin Khawaja, the court was told, had made emails in which he set out his love of jihad. The Old Bailey heard that he had been expected to bring remote-controlled detonators to the group in the United Kingdom. His phone calls had been intercepted by UK intelligence, who had also placed listening devices in the home and car of one of the leaders of the UK group. The surveillance of the seven individuals currently on trial was code-named Operation Crevice. An email from Pakistan to Canada was intercepted by the National Security Center in Fort Meade, Maryland in early February 2004, and alerted authorities to the need for imminent intervention.

Some of Khawaja's emails, read out in the Old Bailey, show his love of jihad. In one, he wrote: "When the Kuffur (non-believer) Americans invaded Afghanistan that was the most painful time in my whole life cause I loved the Mujahideen and our brothers in Afghanistan so much that I couldn't stand it."

"It would tear my heart out knowing these filthy kaafir dog Americans were bombing our Muslim brothers and sisters. Beside that, Osama bin Laden is like the most beloved person to me in the whole world. I wish I could even kiss his blessed hand."

"So I hooked up with some bro's from the UK and else(where) and we all went over to Pakistan to support Jihad in Afghanistan in 2002. We got there and stayed about three months. It was amazing. Best experience in my whole life."

It is inevitable that some Islamists from Al-Muhajiroun, an organization that glorifies jihad, would eventually become involved in acts of terrorism. Though founded in Britain, Al-Muhajiroun's descendant groups still exist in the United States. And their violent and uncompromising rhetoric is no different to that used by their British associates.