In 2004, David Horowitz published Unholy Alliances: Radical Islam and the American Left, a seminal work based on the author's 50-year experience of the American Left. Since the book was written, the links between Islam and the left have become stronger, and not just in the United States. The global anti-war movements have naturally forged alliances between leftists and Islamists- in short, a Black-Red Alliance.

One doesn’t need to look very hard to find evidence of this alliance- it permeates every aspect of European politics today. Scratch beneath the surface of any Leftist organization and you’re likely to find a radical Islamist movement scratching back. Behind every anti-war movement you’ll find support for Palestinian terrorists and Islamic Jihad.

Take Britain’s Respect Party, for instance. This group, which was founded on January 25, 2004 from the ranks of the Stop the War Coalition, is headed by the notorious showman, George Galloway, its only elected member of parliament. Respect encourages its members to also belong to other political groups, namely the Socialist Workers Party (SWP), the Muslim Association of Britain and the Muslim Council of Britain.

The SWP has always demonized Israel, and their involvement in Respect has led to the new party's official policy being staunchly anti-Israeli: "We support the call for a boycott of Israeli goods and services, of tourism to Israel, and of academic, sporting and cultural links with Israeli bodies." One of Respect's senior figures, Yvonne Ridley, told students at Imperial College in February 2006 that "if there was any Zionism in the Respect Party they would be hunted down and kicked out. We have no time for Zionists." She described Israel as "that disgusting little watchdog of America that is festering in the Middle East."

Ridley, a convert to Islam, told Muslims in East London on June 7, 2006, that they should stop cooperating with police. Ridley's bizarre trajectory from Christian Sunday school teacher to Islamist will be discussed in a later article, but her website has a book list, which is compiled "[i]n association with Maktabah, on a monthly basis." Maktabah, an Islamic bookstore, states on its home page: "Due to unforeseen circumstances, we are unable to process any online or telephone orders for approx. 28 days." 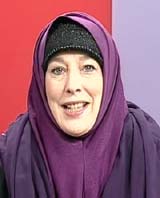 Why should Maktabah be unable to process orders? The Maktabah bookshop in Birmingham was recently raided by anti-terror police in connection with a plot to kidnap and behead a British Muslim soldier. In 1999, Maktabah published a book on Kashmiri jihad, "The Army of Madinah in Kashmir" written by Esa al-Hindi. Hindi is in fact Dhiren Barot, who on November 7, 2006, was sentenced to 40 years in jail for plots to attack targets in Britain and the USA.

These targets included the Prudential building in Newark, the Citigroup building in New York and others. In April 2001, Barot had taken video footage of the World Trade Center. As his camera focused on the towers, he turned the camera, so they lay horizontal in the frame of view. In another clip, he again turned the camera on its side when taking a video the World Trade Center, and he can be simultaneously heard making the sound of an explosion.

Yvonne Ridley is no stranger to terrorists. In 2004, she described Abu Hamza al-Masri, the hook-handed cleric, as "quite sweet really." This was before Hamza was jailed for seven years on February 7, 2006, for inciting murder of Jews, Hindus and non-Muslims.

Also, the first of Ridley's three husbands, Daoud Zaaroura, had been a colonel in the terrorist Palestinian Liberation Organization (PLO).

The Stop the War Coalition, from which the Respect Party grew, is dominated by leftists. Its "convener" is Lindsey German, who is on the central committee of the SWP and has stood a parliamentary candidate for the Respect Party. In July, 2004, she explained the Stop the War Coalition's approach to Muslims, claiming they were poor victims, who needed her condescending middle class protection: "It should be a badge of honour to those of us on the left that a group of people who face discrimination and victimisation should look to organisations like Stop the War Coalition to help defend them - and that the overwhelming majority of those so politicised do not turn to fundamentalist groups but to socialists, trade unionists and peace campaigners."

The Muslim Brotherhood has made deals with leftists in Egypt, the country where it was founded in 1928. In 1987 the Brotherhood forged an alliance with the Socialist Labour Party and the Liberal Socialist Party, called the Labour Islamic Alliance. The Alliance won 60 seats in the Egyptian elections that year, with 37 of these belonging to the Brotherhood's representatives.

The Muslim Association of Britain, with leaders such as Azzam al-Tamimi support terrorist operations in Israel, is happy to court the left to serve its own political ends. On February 16, the first major Stop the War march took place in London, organized with the help of the Muslim Association of Britain. Though the protesters were complaining about the impending Iraq invasion, which followed a month later, official banners at the march read: "No war on Iraq - freedom for Palestine."

The notion of Palestinian "victimhood" has been a keystone of leftist and Islamist ideology for more than three decades, coupled with a jealous contempt for America and Israel. The 2004 rally had influential leftists speaking, such as playwright Harold Pinter, who claimed America was "a country run by a bunch of criminal lunatics."

The Trotskyist Socialist Workers Party has made ridiculous gestures of solidarity with its Muslim affiliates, garnering scorn from Marxist members of the left. At one demonstration outside the Israeli Embassy in London, a white female SWP organizer urged non-Muslim women to cover their heads with scarves, "to show respect" at a demonstration which was "mostly Muslim."

Three days before 9/11, the SWP published an article which claimed the Taliban made women remain secluded at home "as a means of protecting them. At an anti-war meeting in Birmingham, SWP members bowed down to the bigotry of Muslim members by banning an apostate from Islam from attending. At another anti-war rally at Trafalgar Square, the SWP encouraged segregation of secular men and women, in deference to the Muslims present. This behavior led Marxist Sean Mantegna to describe the SWP as "demoralised Guardian readers with headscarves."

The theme of the so-called "Black Red Alliance" was discussed by Douglas Davis in the Spectator (also available here). He noted that Spark, the journal of the Socialist Labour Party, run by former miner Arthur Scargill, had called Asif Hanif, a young Islamist from Britain's Al-Muhajiroun group, as a "hero of revolutionary youth." On April 30, 2003, Hanif killed three Israelis and wounded 60 others in a suicide attack on Mike's Bar on the Tel Aviv seafront.

Davis noted that in August 2002, Ayman al-Zawahiri, Al Qaeda's deputy leader, had urged British Muslims to seek alliances among "any movement that opposes America, even atheists." Abu Hamza had said to his followers: "We say to anyone who hates the Americans and wants to throw the Jews out of Palestine - Ahlan wa Sahlan (welcome). The Prophet teaches that we could ally ourselves even with the atheists if it helps us destroy [the] enemy."

The union of Islam and the left is celebrated in France by Olivier Besançonneau, leader of the French Trotskyites. He said of Muslims: "Are these not the new slaves? Is it not natural they should unite with the working class to destroy the capitalist system?" The French Communist Party commissioned a study to examine the electoral potential of forging alliances with Muslim groups. Already, leftist French groups such as the Revolutionary Communist League (Ligue Communiste Révolutionnaire) and Workers' Struggle (Lutte Ouvri ère) have allied themselves with Islamists to gain seats in the European Parliament.

The language of the proponents of the Black-Red Alliance is confrontational when dealing with valid criticisms of Islamists and Muslim extremists. The main term used to silence criticism is "Islamophobe." In Britain, a website has been in existence for more than a year, calling itself Islamophobia-watch. This site is run by two individuals. One is Eddie Truman, who is both a member of Britain's Communist Party and spokesman of the Scottish Socialist Party. The main writer, who describes critics of Islamist radicalism as "right-wing racists" and "Islamophobes," calls himself Martin Sullivan. His real identity is Bob Pitt, the formerly secretary of the Workers Revolutionary Party.

Pitt's ranting on this website praises leftists such as Ken Livingstone, who exemplifies the stance of the Black-Red Alliance. Livingstone's support for Yusuf al-Qaradawi is mirrored on Islamophobia-watch.

Individually, the parties within the Stop the War Coalition or Respect would stand little chance of getting elected. United, they actually wield political influence. They have also made common cause with Black-Red allies from other countries. In December 2002, before the March 19 invasion of Iraq, a meeting was convened in Egypt which brought international leftists and Islamists to the same table. The meeting resulted in the first Cairo declaration "against U.S. Hegemony and War on Iraq and In Solidarity with Palestine." The declaration included a proposal to send “human shields” to Iraq.

In December 2003, a second Cairo declaration was announced the Black-Red Alliance would continue the "pursuance of the struggle to support the unified international front against imperialism and capitalist globalization."

The naive arguments of these leftists would be risible, were it not for the fact that now, as the Iraq War shows no sign of an imminent conclusion, their views are increasingly being heard. The spokespeople of the Black-Red Alliance are edging further into the mainstream politics of both Europe and America.