Islam: The Graveyard of Morality 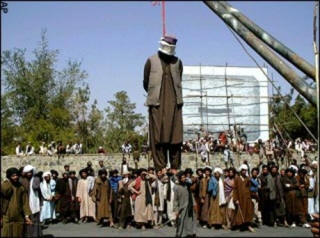 Pakistan has recently been traumatized and severely buffeted by the Taliban and their front-man Sufi Muhammad, trying their best to bring the believing but largely non-practicing Muslims of Pakistan under the black-n-white banner of Prophet Muhammad, and all his teachings encoded in the Quran and Sunnah (prophetic tradition).

It was truly terrifying to watch how close these hordes of barbarians came to the levers of power, before the minority of Pakistani Ummah and a frightened world yelled the globe's seventh-biggest army into action.

Years of hypocrisy and double-think has allowed these barbarians to get a surefooted hold in large parts of northwestern Pakistan; and the fattened, Islam infected, Pakistani army is having a tough time dislodging this handful of rag-tag band of thugs.

But to be fair to the Pakistan army, they are fighting a battle with not just the Taliban but a large majority of Pakistanis who harbor a little Taliban within themselves. Just look at what Doctor Muzaffar Iqbal, a graduate from an American university and resides in America, who writes a regular column in the Daily News, wrote in one of his recent columns.

Let’s find out if this highly educated gentleman is correct in his claim that Sufi Mohammad and, therefore, the Taliban are flawed in their understanding of the Sharia. Just to remind readers that Sufi Mohammad never claimed to interpret Sharia other than directly from the Quran and Sunnah (Ahadiths).

Sufi Muhammad says that Jamhooriat (democracy) is kufr, because it allows equal status to men and women. According to him, men and women are not equal. Let’s see whether Prophet Muhammad and Allah agree with him. Allah says:

Narrated Abu Said Al-Khudri:
Once Allah's Apostle went out to the Musalla (to offer the prayer) o 'Id-al-Adha or Al-Fitr prayer. Then he passed by the women and said, "O women! Give alms, as I have seen that the majority of the dwellers of Hell-fire were you (women)." They asked, "Why is it so, O Allah's Apostle?" He replied, "You curse frequently and are ungrateful to your husbands. I have not seen anyone more deficient in intelligence and religion than you. A cautious sensible man could be led astray by some of you." The women asked, "O Allah's Apostle! What is deficient in our intelligence and religion?" He said, "Is not the evidence of two women equal to the witness of one man?" They replied in the affirmative. He said, "This is the deficiency in her intelligence. Isn't it true that a woman can neither pray nor fast during her menses?" The women replied in the affirmative. He said, "This is the deficiency in her religion."

Sufi Mohammad says Jamhooriat is kufr because it allows Muslims and non-Muslims equals’ status. He claims Islam does not allow equal status to Muslims and non Muslims. Let’s see what Allah and Prophet Muhammad have to say on that.

Narrated 'Ikrima:
Some Zanadiqa (atheists) were brought to 'Ali and he burnt them. The news of this event, reached Ibn 'Abbas who said, "If I had been in his place, I would not have burnt them, as Allah's Apostle forbade it, saying, 'Do not punish anybody with Allah's punishment (fire).' I would have killed them according to the statement of Allah's Apostle, 'Whoever changed his Islamic religion, then kill him.'"

Sufi Mohammad says that music is haram, and wishes to ban all music and punish the perpetrators of this heinous crime. Do Allah and his prophet agree? The following Islamic scripture confirms it:

Narrated Abu 'Amir or Abu Malik Al-Ash'ari:
That he heard the Prophet saying, "From among my followers there will be some people who will consider illegal sexual intercourse, the wearing of silk, the drinking of alcoholic drinks and the use of musical instruments, as lawful. And there will be some people who will stay near the side of a mountain and in the evening their shepherd will come to them with their sheep and ask them for something, but they will say to him, 'Return to us tomorrow.' Allah will destroy them during the night and will let the mountain fall on them, and He will transform the rest of them into monkeys and pigs and they will remain so till the Day of Resurrection."

When Sayyidana Abdullah Ibne Mas'ood a very close companion of our Prophet was asked about the meaning of the term 'lahwal hadith', he replied “I swear by Him besides whom there is no other God that it refers to ghinaa (singing).”

This statement, he repeated three times. This view is unanimously supported by the four Khalifas, the eminent Sahabaah, Tabi'een, the four Imams and other reliable Islamic scholars and authorities.

Sufi Mohammad says pictures (including TV and movies) are haram. He is indeed correct. Just look at the number of Ahadiths which categorically denounce pictures and therefore TV, movies etc.

* On the authority of Ibn Abbas (ra) it is reported that he heard the Messenger of Allah said: "Every picture maker is in the Fire. A soul will be placed in every picture made by him and it will punish him in the Hell-fire." (Narrated by Bukhari and Muslim)

* On the authority of Aishah (may Allah be pleased with her) it is reported that the Messenger of Allah said: "The most severely punished of people on the Day of Resurrection will be those who try to make the like of Allah's creation." (Narrated by Bukhari and Muslim)

In fact, the modern day mullahs have reaffirmed these sayings by the following fatwa. Sheikh Ahmad Kutty, a senior lecturer and an Islamic scholar at the Islamic Institute of Toronto, Ontario, Canada, answers:

"Photography as a medium of communication or for the simple, innocent retention of memories without the taint of reverence/shirk does not fall under the category of forbidden Tasweer. One finds a number of traditions from the Prophet, peace and blessings be upon him, condemning people who make Tasweer, which denotes painting or carving images or statues.

Sufi Muhammad and his brethren in arms mete out punishments to the deviants of Islam by beheading and publicly displaying them. Are they following in the footsteps of the Prophet? Let’s see what the Islamic scriptures tell us:

Volume 4, Book 52, Number 270:
Narrated Jabir bin 'Abdullah:
The Prophet said, "Who is ready to kill Ka'b bin Al-Ashraf who has really hurt Allah and His Apostle?" Muhammad bin Maslama said, "O Allah's Apostle! Do you like me to kill him?" He replied in the affirmative. So, Muhammad bin Maslama went to him (i.e. Ka'b) and said, "This person (i.e. the Prophet) has put us to task and asked us for charity." Ka'b replied, "By Allah, you will get tired of him." Muhammad said to him, "We have followed him, so we dislike to leave him till we see the end of his affair." Muhammad bin Maslama went on talking to him in this way till he got the chance to kill him.

"Sirat e Rasulullah" by Ishaq, page 464
After 800-900 male adults of Bani Quraiza were beheaded in batches, and thrown in trenches dug in Madina, the apostle divided their property, wives and children as booty... He took Rayhana d. Amr b. Khunafa for himself.

Volume 5, Book 59, Number 447:
Narrated Abu Said Al-Khudri:
The people of (Banu) Quraiza agreed to accept the verdict of Sad bin Mu'adh. So the Prophet sent for Sad, and the latter came (riding) a donkey and when he approached the Mosque, the Prophet said to the Ansar, "Get up for your chief or for the best among you." Then the Prophet said (to Sad)." These (i..e. Banu Quraiza) have agreed to accept your verdict." Sad said, "Kill their (men) warriors and take their offspring as captives, "On that the Prophet said, "You have judged according to Allah's Judgment," or said, "according to the King's judgment."

Sufi Mohammad and his brethren in arms have killed hundreds of women and children indiscriminately with numerous suicide bombings in Pakistan. Are they following their Prophet? Very much so:

Narrated As-Sab bin Jaththama:
The Prophet passed by me at a place called Al-Abwa or Waddan, and was asked whether it was permissible to attack the pagan warriors at night with the probability of exposing their women and children to danger. The Prophet replied, "They (i.e. women and children) are from them (i.e. pagans)." I also heard the Prophet saying, "The institution of Hima is invalid except for Allah and His Apostle."

Asma bint Marwan had spoken critically of Muhammad, telling her tribe to be wary of him. She said: "'You obey a stranger who encourages you to murder for booty. You are greedy men. Is there no honor among you?' Upon hearing those lines Muhammad said,’ Will no one rid me of this woman?' Umayr, a zealous Muslim, decided to execute the Prophet's wishes. That very night he crept into the writer's home while she lay sleeping surrounded by her young children. There was one at her breast. Umayr removed the suckling babe and then plunged his sword into the poet. The next morning in the mosque, Muhammad, who was aware of the assassination, said,’ You have helped Allah and His Apostle.' Umayr said, 'She had five sons; should I feel guilty? ''No,' the Prophet answered. 'Killing her was as meaningless as two goats butting heads.'"

Sufi Muhammad and his horde of barbarians come across as particularly evil men. Do they resemble their 7th-century mentor? His ‘superb’ morality can be judged from some of the following from Islam’s own scriptures:

From his share of captive women, prophet gave his son-in-law, Ali a slave girl, Raytah bt Hilal to enjoy her at his will. He also presented Uthman b. Affan, his son-in-law, another slave girl Zainab b. Hayan, and bestowed another girl (name unknown) to his father -in-law Omar Ibn Khattab. Omar gave that girl to his son Abdullah. Most of Prophet's other elite companions received slave girls as gifts.

"Following Badr, Muhammad sent a number of raiders with orders to capture some of the Meccans and burn them alive."

"When we reached Khaybar, Muhammad said that Allah had enabled him to conquer them. It was then that the beauty of Safiya was described to him. Her husband had been killed, so Allah's Apostle selected her for himself. He took her along with him till we reached a place called Sad where her menses were over and he took her for his wife, consummating his marriage to her, and forcing her to wear the veil.'"

Kinana, their chief, was tortured by Mohammed by lighting fire on his chest to find whereabouts of his treasury (Ishaq, p. 515). Later he was beheaded. Seventeen-year-old Safia was his beautiful wife with whom Mohammed slept the same night.

This is a sad tale. As a human and a Pakistani, my heart sinks when I think of where we are being led by following this monster. I wish I had a magic wand to remove the blinkers from the whole nation of Pakistan, and force them to read their own scriptures, and then abandon it to the dustbin of history. Then and only then they would really follow the path of modernity, equality, human rights and knowledge.

I implore to my Pakistani brethren, enough is enough! Come out of your stupor, start thinking for a change, and drop this cultic religion, which is destroying you and your future generations.

And alas! It seems it will be a long long wait, if at all that happens.