Did Abe Lincoln take a peek at the Qur’an before he called Ulysses S. Grant to Washington to take command of the Federal Armies in 1864? Did he ask to see Thomas Jefferson’s copy of the Muslim Holy Book before he introduced Grant to his Cabinet? What did he say to Grant?

“If you meet them in battle, inflict on them such a defeat as would be a lesson for those who come after them, that they may be warned.”

“He will give you mastery over them.” 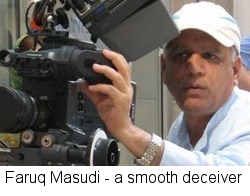 Faruq Masudi says Lincoln was a Muslim. Masudi is a filmmaker. He makes movies and does just about what the United Arab Emirates tells him to do. He says Lincoln was born a Muslim. That’s like saying Lassie and Family Guy’s infamous Brian were born dogs. “According to the Quran,” says Masudi, “everybody is born a Muslim. It is only by his own free will that a man chooses a different course for himself. In that Abraham Lincoln was not only a born Muslim but he chose to live by Islamic edicts like abolishing organized slavery, establishing equality of all human beings, democracy and accountability to God and Man; core Islamic concepts as propounded in the Holy Quran.”

That’s quite a mouthful. Lincoln stars in Masudi’s latest film, Quran Contemporaneous Connections, sharing top billing with Saladin, the late King Faisal of Saudi Arabia and Sheikh Zayed of the United Arab Emirates. Masudi has had a long career as a fiction writer, filmmaker and PR man. One might now add ‘thief’ to that list. In his efforts to promote Abrahamism, Masudi is claiming Lincoln for Islam. It is a sort of grand-theft autobiography.

Masudi hasn’t fooled America’s mainstream movie distributors. They have shied away from showing Quran Contemporaneous Connections. That hasn’t stopped Masudi from proselytizing. The film has been released on line and is available at premium stores like Amazon.com.

Was Lincoln a Muslim? To most people, including many Muslims, that would be a stupid question. Lincoln was a self-made man, about as self-made as one could get; he was as American as apple pie, as American as Cump Sherman and Sam Grant, as good a triumvirate as ever graced the world. No one would describe Abe, Cump and Sam as avid churchgoers but they put an end to slavery in the United States

Masudi said Lincoln lived by Islamic edicts like abolishing organized slavery, but the truth is Islam’s edicts against slavery have been no more effective than the Pope’s Bull against the comet—slavery, both organized and unorganized, is alive and well and is prospering throughout the Islamic world. Christian children are being sold into bondage in Pakistan and Sudan every day. They are being kidnapped and raised as Muslims in Somalia and Egypt. Women from Southeast Asia who flock to the Emirates and Saudi Arabia to take jobs as domestics often find more than they bargained for. Many are held in virtual slavery and are often beaten and raped. It was the Muslim and not the Jew that sold tens of thousands of black Africans to the slavers that transported them to the New World.

And there’s that little matter of 9/11 and the London Bombings.

It might be interesting to hear the views of some of those behind the production of Quran Contemporary Connections on terrorism—the brain cells, the masterminds, the experts that coalesced to make the film possible: Mark, Hossein, Nancy, Jonathon, Omer, Joseph and the rest.

From Mark Juergensmeyer: “In fact, there have been far more attacks by Christian terrorist groups on American soil in the last fifteen years than Muslim ones. Aside from September 11 and the 1993 attempt to destroy the World Trade Center, almost all of the other terrorist acts have been perpetrated by Christian theocracy. Yet somehow, despite evidence to the contrary, the American public labels Islam as a terrorist religion rather than Christianity.”

Juergensmeyer is confused. Unless he is counting the 700 Club and the Promise Keepers as terrorist groups, he has Eric Rudolph, Michael Griffin and a handful of loners. Individuals do not qualify as groups. On the other hand, the number of Muslim organizations listed as un-indicted co-conspirators in terrorist acts and in raising money for terrorist activities is lengthy and is increasing as more and more of their activities come to light. Lee Boyd Malvo, Mohammed Reza Taheri-azar, Asan Akbar, Yaser Abdel Said—yes, he was a terrorist—and many others have committed individual acts of terrorism against American citizens. And, please let Tim McVeigh out of the discussion—he was not a Christian.

From Dr. Hossein Nasr: “You take the most eminent representatives of Islam—all of them came out with very, very clear and categorical opposition to terrorism. (Yes, who can forget the Muslim march against terrorism—did Dr. Nasr participate?) There was a lot more opposition by these people against the terrorists and exclusivists than there has been in the United States by mainstream Christians against those extreme voices who call Islam a religion of evil and try to demonize Islam. There is practically the mirror image—that preacher in Saudi Arabia who vilifies Jews and Christians has his exact image in someone in Georgia who is vilifying the Muslim.”

Hossein need not go to Saudi Arabia to find an Imam (preacher) vilifying the Jews. They are closer to home than Riyadh and Teheran. They are in North Virginiastan and California and New York. They are in Dearborn and Minneapolis. Hatred of the Jews is preached in Mosques and Madrassas from the purple mountains to the fruited plains. America itself is also a target of this hatred…Those who call Islam a religion of evil are excoriated in the Media and are shunned.

From Joseph Lombard: “Recent history has demonstrated that ideologies are the work of ideologues and marginal intellectuals, and are based upon reduction of truth to whim, conjecture and passional proclivities. Ideologues purport to have knowledge about science and religion but they are actually based on distorted view of human nature. Since ideologies are evanescent they have no answer to existential dilemmas of humankind and cannot deliver the spiritual nourishment that is absolutely vital for a healthy human life. In contrast religion is universal and it is the primordial tradition of humanity.” (This is a summation of Lumbard’s thesis by Ejaz Akram)

Religion may be universal and primordial but the argument can and should be made that Islam is not a religion but an ideology (politics) masquerading as a religion. Muhammad was closer to Hitler than to God (Allah). Honor killings, female slavery and the lopping of arms and legs off of thieves cannot provide much spiritual nourishment or be considered vital for a healthy human life. If Lombard is correct and religion is primordial then the animists still being hunted down and exterminated by Muslim theocrats in Sudan are superior to Islam. If so, why is Lombard supporting an ideology rather than a religion?

Qur’an: 4:65 “They can have no faith, until they make you (Muhammad) judge in all disputes, and find in their souls no resistance against Your decisions, accepting them with complete submission.”

Denis Schulz was prospective convert to Islam (read his testimony: How I Almost Became a Muslim?) before changing his mind after the 9/11. He actively writes on the threats of Islam and terrorism.