Radical Muslim Chaplains Root Cause of Islamic Fanaticism and Terror 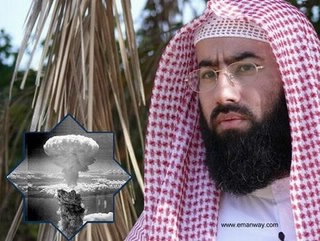 He wrote in the daily Al Watan, (February 8, 2009), “We Arab Muslims must start thinking of producing nuclear bombs. We can finance that with our petrodollars, and use Egyptian brains to make that dream come true. Our prophet Muhammad, peace be upon him, ordered us, ‘to prepare every thing possible to fight the infidels’ (meaning Christians, Jew, Hindus, Buddhists, etc.). These people understand only the language of power. We’ll tell the world: ‘Aslem Taslam (either you submit to Islam, or you’ll have to die.”

As Ali, a Kuwaiti, read that he said, “Oh my God! Who is going to operate our oil industry, electricity and water plants? They are all operated mostly by non-Muslims, at least in the Arab oil countries.”

In Hawalli mosque, he said in a Friday preach (January 9, 2009), “It is not true that the Americans liberated Kuwait in 1991. It was Allah. He simply used the American troops to liberate our country. Therefore, we must thank Allah, not the Americans.”

On Kuwait TV, he told his audience (February 2, 2009), “I know of many cases of Muslims who were infected with cancer. They drank Zamzam water (from “holy” Mecca) and were completely cured. You just need to believe in it, believe in Islam and his prophet.”

Very often, Al Awadhi narrates the following “Islamic miracle:” after a house in Cairo completely burned down, the fire fighters found a copy of the Koran. It was barely touched by fire. It survived the fire. “Do you know why? Because it is Allah’s book. It is the only true holy book on the earth.”

Al Awadhi also preaches that Muslims do not need to read any other book than the Koran. It has everything: “Instructions on how to abide by Shari’a, the law of Allah, and all kinds of scientific theories, which the West is using to develop all kinds of technology” (in Al Watan, November 17, 2008).

Occasionally, Al Awadhi repeats the following myth. A valiant pious Muslim went to Napoleon Bonaparte, (after the latter invaded Egypt in the 18th century) and told him, “You’re not a just ruler.” According to Al Awadhi, Bonaparte was angry and ordered jailing the man in a small cell, and asked his soldiers to bring a hungry lion and release it into the cell. They did so. The following day, the soldiers opened the cell and were astounded. The man was still alive; he was sitting on one end of the room and the lion on the other end.

The soldiers asked the man, “What happened? Why didn’t the lion devour you?” The man looked at them with a triumphant smile and said, “I was praying as you released the lion into the cell. Allah prevented the lion from coming close to me.” Then they asked him, “Weren’t you scared?” “Actually I was only afraid that it (lion) would tarnish my ablution. That is all,” the man said.

Al Awadhi ends the story by saying, “After learning about the story, many French soldiers at the time converted to Islam. Allahu Akbar!”

Al Awadhi ends most of his preaches by calling Allah to infect all non-Muslims with AIDS and hit them with natural devastating catastrophes. He also comforts his fellow Muslims by saying, “Our prophet Muhammad will sit next to Allah on the day of judgment and convince Him that all good Muslims should enter Paradise.”

By the way, Al Awadhi works for the Ministry of Islamic Affairs in Kuwait and gets a monthly salary of 9,000 petrodollars.

Al Awadhi is in good society. He cherishes and ad nausea repeats what his fellow radical chaplains disseminate among Muslims.

Sheikh Muhammad Al Tabtaba’i, dean of the Shari’a (Islamic studies) College at Kuwait, promulgated in the daily Al Qabas (August 4, 2003), “Labor strikes are forbidden in Islam. Muslims should be grateful to their employers who give them jobs, and if they do not like the job and its pay, they should leave it.” He also said, “We reject the Western concept of freedom. It is un-Islamic. The only thing that is Islamic is obedience to Allah.”

Sheikh Yousef Al Badri, at Al Azhar University, rushed to support Al Tabtaba’i. He issued a fatwa (Al Sharq Al Awsat daily, May, 4, 2008) in which he condemned demonstrations against the regime of President Husni Mubarak. “Mubarak’s governance has brought prosperity and peace to Egypt. Demonstrating against Mubarak equals disobedience to Allah.”

Sheikh Saleh Al-Lehadan, head of the Saudi Fatwa Council, issued a fatwa (Saudi TV, January 15, 2009) in which he bans demonstrations. “Demonstrations are an infidel fad. Good Muslims pray instead of demonstrating.”

Kamil Al Najjar criticizes in Al Hiwar Al Mutamedden (Modern Dialogue), all those radical fatwa sheikhs. “We Muslims thank Allah for everything, for the good and for the bad. But we never thank those (infidels) who invented for us the car and the airplane, for example. On the contrary, we even condemn them. After taking off, the Saudi, Kuwait, and Egyptian airlines begin their flights with a verse from the Koran that reads, Thank Allah who puts all this under our service….”

Al Awadhi and his fellows are the kind of sheikhs who dominate the fatwa-market in the Muslim world. They have free access to all print and audio-visual media. Their stories and hallucinations are voraciously consumed by illiterate and half-illiterate Muslims of which the Arabian Peninsula, in particular, has quite a few.

The man on the right asks, “What is the latest book you have read? The man on the left answers: “Book? I heard of this word. Could you help me and tell me what it is.”

Unless Muslim consumers of Al Awadhi’s hallucinations and those of his ilk are exposed to basic modern common sense information, the war on terror will remain futile. Only properly informed Muslims would make “Islam experts” like Al Awadhi ineffective, and hence they will root out the weed of fanaticism.

Dr. Sami Alrabaa, an ex-Muslim, is a sociology professor and an Arab/Muslim culture specialist. Before moving to Germany he taught at Kuwait University, King Saud University, and Michigan State University.