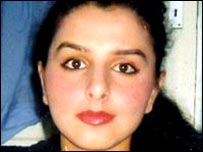 Banaz Mahmod Babakir Agha was a beautiful young woman of a family who had migrated to Britain in 1998 from the Kurdish region of Iraq.  Banaz, aged 20, lived in Mitcham, south London.  On Monday, June 11, 2007 her father and her uncle were found guilty of killing her.  Her father had ordered the killing, and his brother had carried it out.  A shoelace was tied around Banaz's neck, strangling her.  Her decomposing body was found in Handsworth, Birmingham, 70 miles away, on April 27 last year, three months after she had "disappeared".
Another man, Mohammed Marif Hama, who was not a relative, but belonged to the Iraqi Kurdish community, pleaded guilty to murder on March 9 this year.  Another member of the Iraqi Kurdish community, Pshtewan Hama, pleaded guilty to perverting the course of justice.  The reason for Banaz being killed was because she had a boyfriend, 28-year old Rahmat Suleimi, a Kurd from Iran.
After Banaz's father and uncle pleaded guilty, her boyfriend said: "She was my present, my future, my hope. She was the best thing that had ever happened to me.  I couldn't ask for anything better than that.  Banaz was the nicest and the sweetest person I have ever come across.  She had the best personality.  If you met Banaz once you would never forget about her.  After I met Banaz she just changed me and I became a completely different person.  She hated to argue with anyone, she hated to see anyone suffering from anything.  She just wanted to help anyone.  She wanted to be a happy person.  She wanted to see everyone be happy."
Suleimi said of honor killings: "I just hope that one day this is going to stop and there is going to be a way out for people. I know it is too late for me and Banaz.  If there's anyone out there in the same situation, do something about it before it's too late.  Once it's too late, it's too late - you will never get your life back."
The convictions last week were the latest in a series of Muslim honor killings in Britain.  Banaz and her boyfriend had been repeatedly threatened.  Just three days before she officially "vanished", a group of men Kurdish men had tried to abduct Rahmat Suleimi in a car.  Even though British police did not take Banaz's appeals seriously while she was alive, her death spurred a massive police inquiry.  There were 47 searches of houses, 22 arrests, 779 statements were taken.  Sixteen people were bailed to reappear before police.  It is thought that several people who had been involved in the plot to kill the young woman had left the country.
In the Kurdish autonomous region in Iraq, where Banaz's family had come from, the regional prime minister promised a hard line against such killings this week.  Neghervan Barzani said: "recently there have been horrendous crimes committed against women in some areas of Kurdistan.  While we condemn these crimes, we also rebuke the government ministers and other bodies for not having applied suitable solutions to prevent such episodes reoccurring."
Barzani recommended that honor killing, classed in the penal code as a separate offense to murder, should be reclassified as "murder".  Honor killing is viewed as a "justifiable homicide" and in many Muslim societies, it is not viewed as seriously as murder.
Over the past decade in Britain, there have been at least 25 confirmed honor killings in the Muslim community, but this is only the tip of an iceberg. The police have acknowledged shortcomings in their approach to Banaz's pleas for help, and this summer, the Association of Chief Police Officers is planning to launch an action plan on "honor violence".
After the conviction of Banaz's uncle and father, Diana Nammi of the London-based Iranian and Kurdish Women’s Rights Organization said of honor crimes: "We’re seeing an increase around the world, due in part to the rise in Islamic fundamentalism."
In 2000, the United Nations announced that every year, 5,000 girls and women were killed in "honor crimes", though that figure may be a low estimate.
In the politically correct climate of Britain where 1.8 million Muslims live, the issue of honor killing has never been addressed seriously.  Since the 1960s, communities of Muslims have evolved in Britain's inner cities, where integration and assimilation have not happened.  Instead of attempting to integrate Muslim communities within the greater fabric of a British society, politicians have praised the values of multiculturalism.  And in Britain's ghetto communities, separatism and segregation are the chosen aims of many.  Arranged marriages are still the norm, particularly amongst Britain's Muslims of Pakistani and Bangladeshi origins.  Such unions constantly import more people, who have little experience of Britain, and who automatically become citizens of an increasingly segregated nation.
Honor killing is one aspect of Muslim society that perpetuates traditional customs which flourish in Kurdish Iraq, Pakistan and Bangladesh.  Most honor killings and acts of "honor violence" happen in Britain because a young woman (or man) has chosen to embark upon a relationship not sanctioned by their parents or peers.  Sometimes merely becoming "too Western" is used as an excuse to kill.  During the trial of her killers, it was stated that the family thought one of the "crimes" of Banaz Mahmod Babakir Agha was that she was "too Westernized".

Take the case of 49-year old Mohammed Riaz's family, who lived in Accrington, Lancashire, in the north of England.  Riaz objected to the way his wife Caneze was bringing up their four daughters, Sayrah (16), Sophia (15), Alicia (10) and Hannah (3).  An inquest hearing in February this year heard that friends and relatives claimed that the father was a "conservative" Muslim.  He had planned for his children to undergo arranged marriages, but Caneze would not allow this.  When the girls had been bought Western style clothing, Mohammed Riaz burned the garments.
On November 1 last year, while his wife and daughters slept, Riaz poured gasoline outside their bedrooms, across the hallway and down the stairs.  He then set it alight.  His wife and daughters were killed in the conflagration, yet Riaz was pulled out alive.  He died two days later of 65% burns.  Tragically, the only member of the family to survive was the son, 17-year old Adam.  He was not in the house at the time as he was in hospital in Manchester, battling Ewings Sarcoma, a type of leukemia.  Five weeks after his family had burned to death, Adam died. 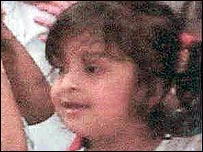 Perhaps the youngest victim of a British honor crime is six-year old Alisha Begum, whose family originally came from Bangladesh.  Alisha was the youngest of 12 children.  She lived at the family home in Perry Barr, Birmingham.  On March 10, 2006, she was asleep on a bunk bed in an upstairs bedroom when two men poured gasoline through the front door and set it alight.  The rest of the family managed to escape by jumping from an upstairs window.  Little Alisha was trapped in the flames, and suffered 95% to 100% burns.  She died the following day in Birmingham Children's Hospital.
In September 2006 two men were on trial at Birmingham Crown Court.  These were Hussein Ahmad, a 26-year old dentist, and his associate 18-year old Daryll Tuzzio.  Hussein Ahmed had a sister, who had been having a relationship with 21-year old Abdul Hamid, Alisha's elder brother.
Prosecutor Adrian Redgrave said: "One hears of so-called honor killings though one may wonder how by any stretch of the imagination there can be any honor in what happened here, resulting in the death of a six-year-old child.  Hussain and his associates knew that at the house there was not only Abdul Hamid, and he was the one they were trying to get at, but they knew full well that there was a whole family living there."
The prosecutor described the attack as "pure wickedness" which had been done to threaten Abdul Hamid for forming an "unauthorized relationship" with Hussein Ahmad's sister Meherun.
Surprisingly Hussein Ahmad, who had originally conceived the plot, was acquitted of murder, even though his brother and another friend were still wanted by the police.  They were thought to have fled to Bangladesh.  Darryl Tuzzio, who also had Bangladeshi origins, was found guilty of arson and manslaughter on October 5, 2006. He was sentenced to eight years' jail on November 2.
These are just a few of the many cases on record of honor killings in Britain. In Part Two, I will discuss such cases in other countries. In Pakistan and Bangladesh, where such killings frequently take place, there are also cases of horrific mutilations carried out in the name of "honor".


How about Christians start doing the same. On similar count, Christians in Europe would have to many cases to shed blood. Who knows, they might starts picking the art from the aliens some day.


There's nothing in the world more stupid, or as Winston Churchill said, "more retrograde" than a Muslim. "Muslim superiority" is a great example of the theory that if you put enough money behind any belief system,it will dominate.