In Part One of this series, I described a few British honor killing cases.  In fact, the phenomenon of killing for "honor" has become a problem wherever large concentrations of migrant Muslims have settled in ghettoes within Western cultures.  Families choose to live in the West, but insist on following narrow cultural traditions.  Their children are trapped between two cultures.

In Germany, there is a community of 3 million Muslims, most of whom are migrant workers from Turkey.  In Berlin, there are 200,000 Turks living in run down suburbs.  Hatun Surucu was a young woman of Turkish Kurdish origins.  On February 7, 2005, when she was aged 23, Hatun was waiting at a bus stop in the Tempelhof district of Berlin.  Her 18-year old brother Ayhan approached her and shot her three times in the head.  Hatun's death was certainly not the first case of honor killing in Germany, but the media were shocked by the reactions of her family and members of the local community.
At a nearby school, filled with children of immigrant families, 14-year old Turkish boys applauded Hatun's killing.  One boy said: "She only had herself to blame".  Another argued: "She deserved what she got. The whore lived like a German".  The media would have sidelined Hatun's case, were it not for the school's director, who sent letters to parents, and copied these to other teachers across Germany.  TV and newspapers expressed the public shock.  For the first time, the issue of honor killing was being discussed throughout the nation.
Hatun's murder was the sixth honor killing to have happened in Berlin within four months.  Two of the women victims had been stabbed in front of their small children, one was shot, another strangled, and the other had been drowned.  A Turkish women's group called Papatya noted at the time of Hatun's death that 40 honor killings had taken place in Germany since 1996.
Three of Hatun's five brothers were charged with her murder.  Ayhan, the eighteen-year old who fired the shots, had bragged of his deed to his girlfriend.  Two older brothers, Mutlu aged 25 and 24-year old Alpaslan, were suspected of providing the gun that killed Hatun.  With media interest leading up to the trial, the details of Hatun's life emerged.  In 1998 when she was only 15, she had been sent to Turkey by the family to marry a cousin.  She left him and returned to Berlin in May 1999, pregnant.  She gave birth to a son called Can and left the family apartment.  She refused to wear the hijab or Muslim headscarf, and raised Can on her own.  Hatun took up a course to train to be an electrician.  She was nearing completion of her training when she was murdered.
On April 13, 2006, Ayhan Surucu was sentenced to nine years and three months' imprisonment for Hatun's murder.  When Judge Michael Degrief read out the sentence, the young man laughed. The court could not establish beyond reasonable doubt that the two other accused brothers were guilty, and they were freed.  The other members of the family cheered.  Within days, they announced they were to hold a party.  Five members of the family were photographed walking through a park in Kreuzberg with smiles on their faces.  Hatun's sister, who was close to the family, announced her intentions to legally adopt Hatun's child. 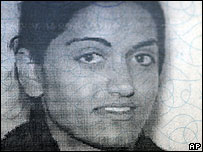 In Denmark, there have been nine known honor killings.  One of these captured media interest because it had taken place in broad daylight, and had been captured on camera.  Eighteen-year old Ghazala Khan came from an immigrant Pakistani family.  On September 23, 2005, she was with her 27-year old Afghan husband Emal Khan outside the Slaglese train station in Westen Zealand.  Because she had married someone not of the family choosing, Ghazala was thought to have offended her family's "honor".  The marriage had taken place only two days before.  They were intending to flee by train.
Ghazala's 29-year old brother Akthar Abbas was in hiding near the station, armed with a loaded gun.  He shot his sister twice through the heart, killing her.  He also shot her husband twice in the stomach.  Emal Khan survived, and would later give evidence at the trial, which commenced on May 15, 2006.  What was unusual about this murder trial is that although one person had carried out the shooting, five other members of the family and three family friends within the Pakistani community were also placed on trial.

During the trial, Akthar Abbas claimed that he had murdered only in "self defense" because Emal Khan had kicked him.  On June 27, the nine members of the family entourage were found guilty, and the following day their sentences were set.
Ghulam Abbas, Ghazala's father, was found guilty of incitement to murder and plotting the murder.  Akthar Abbas was found guilty of murder.  The pair were given life sentences, commuted to 16 years' jail.  Two uncles received 16 years' jail.  An aunt, who had helped to lure Ghazala to the station, and a cousin were both jailed for 14 years.  As these were still not full Danish citizens and still had Pakistani nationality, the court ordered that the aunt and cousin should be expelled after serving their jail terms.  Three other individuals, whose involvement had mainly been confined to telephone liaisons, were given sentences from eight to ten years.
In other European countries where Muslim immigration has taken place at an alarming rate, honor killings also occur.  The Netherlands has a population of 16 million, with a million of these being Muslim.  In the Netherlands at least 20 such killings have happened, mainly amongst Turkish Muslims.  In 2000 the Netherlands introduced a draft proposal on honor killings to the UN General Assembly to spur action against such crimes.  In 2005 the Dutch Cabinet decided to crack down on such killings. 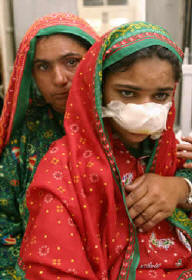 mutilations".  In November 2005 in Punjab province in the east of Pakistan, Shamin Mai was attacked by six individuals, including her uncle Bilal and her brother Bashir. Shamin Mai had committed no crime other than to engage in a marriage contract, on her own initiative.  As a result, she had both her legs hacked off.
In May 2006, a young woman was mutilated by her husband and his brother in Dera Ghazi Khan district, Punjab province.  Eisa Khan Khosa married his 18-year old wife Ayesha only a month and a half before. Khan suspected his new bride was having an affair with her cousin.  They argued, and Ayesha went to live at her brother's home.  On May 20, with his brother, Khan visited the house and persuaded Ayesha to come back.  She agreed.
On the way back to the family home, Khan and his brother cut off Ayesha's nose and her lips, and abandoned her.  Ayesha was taken to the Dera Ghazi Khan district hospital, and her husband and brother-in-law were arrested.  In addition to mutilating her face, her husband had also tried to cut off her arms. The two men were in custody, but Ayesha said: "They are powerful people with money, and will get out on bail." 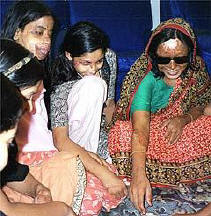 Another form of "honor mutilation" which has become increasingly common in recent years is "acid attack".  Pakistan's Human Rights Commission states that every year in Pakistan, 400 women are subjected to acid attacks.  In Bangladesh in 2005, there were 268 incidents of acid attacks, mainly upon women, according to the Acid Survivors Foundation.  The scale of such attacks may be higher.  The victims of such attacks are permanently disfigured.  Their chances of finding a partner are taken away, and often they are blinded.
Zahida Perveen was one Pakistani victim of a razor attack.  The assault blinded her, and also her ears and nose were sliced off. She had been tied up by her husband as he attacked her.  He suspected that Zahida had been involved in a relationship with his brother.  She said: "He came home from the mosque and accused me of having a bad character.  I told him it was not true, but he didn't believe me.  He caught me and tied me up, and then he started cutting my face.  He never said a word except ‘This is your last night’.”
There are many Muslims who claim that honor violence and honor killings have nothing to do with Islam, and it is only a "cultural" tradition.  As Islam aims to be a guide for all aspects of life, the predominance of honor killings in Muslim countries and societies gives the lie to such claims.
In Part Three, I will show that in the Middle East, the heartland of Islam, the custom of honor killings is also endemic in local "culture".