In this Article I like to expose some supposed miraculous facts, that came in the Quran. Muslims brag about the fact that the Qur’an was ahead of the times. They assert that the Quran mentioned scientific facts that were never discovered yet, and such facts came from an illiterate man; Muhammad.

The fact is the Quran was but a collection from earlier religions and myths that spanned the Middle East and Arabia regions. Muhammad also “borrowed” from existent Arab poetry.

It is this last part of the relation between the Qur’an and Arabic poetry that this article is interested in. Below, I show evidence that indeed Muhammad “pirated” from famous Arab poets.

Some Comparisons and Examples

Let us compare the poetry of ''Zaid bin Amr bin Nefille'' and the Quran both in style and word choice:

[some Muslims like to claim that [bin Hisham] did not write that Zaid WAS the poet who wrote this quote, Omaya bin al saalhat died 43 years before Muhammad died] did instead, either way, The quote stands]

On mocking the Pharaoh...

The people of Noah denied before them, and [the tribe of] 'Aad and Pharaoh, the owner of stakes (Quran 38:12 – Sahih International)

[*] ‘The Life of Muhammad’, by bin Hisham, Chapter "The poetry of Zeid in leaving Paganism''. Also see ‘The Beginning and the End’, by bin Katheer, Chapter "Creating the Skies".

And when the earth has been extended (Sahih International; Qur’an 84:3)

A more precise translation is: “And when the earth has been flattened out”

Kaib bin Lu'ay used to gather his people from Quraish and make speeches and sermons onto them, among his sayings, there is this speech

''As fellows, listen, and learn and understand and comprehend, nights are still and daylight is conspicuous, and earth is spread, and skies stacked like building and the monument ''AWTAD'' [PEGS / STAKES] and the stars flags and the original people as the people of late.

(*) The beginning and the end] by Ibn Katheer, chapter 2

''Ka’b'' talked about AWTAD, FIVE HUNDRED AND SIXTY YEARS. "and'' Muhammad included it in his Quran and his supposed revelations, as Allah told him to reveal it, copying from a Pagan who lived long before Muhammad was born.

So, the supposed miracle of Quran that talks about ''Pegs and support'' was right out of, the sayings of the PAGANS, before the existence of Islam. It is safe to say that today's Muslims claims of miracles in Quran, did not belong to Islam, rather belongs to the Pagans and the Bible.

What is even worse, the people of Muhammad's time had heard of this word [AWTAD] (or “posts”) many times during their life time and to them, it was not a miracle, in fact it was nothing but a repeat.

This, also, explains the fun Pagans had listening to Muhammad reciting the supposed revelations of the Quran in the town square. They heard all of them before many times. This is why the pagans kept insisting on Muhammad producing actual miracles. They could read between the lines and knew that Muhammad brought nothing new.

Here is another kind of theft by Muhammad. This time he stole from the Bible. The Bible, Psalm 104:5 speaks about the “Pegs” or earth’s foundations

“Who laid the foundations of the earth, that it should not be removed for ever.”

Your hands made me. Say how you mixed me like clay, are you going to send me back to the sand. Didn't you pour me like milk and processed me like cheese. [COVERD ME WITH SKIN AND FLESH AND WEAVE IN ME, BONES AND NERVES, you gave me life, mercy and my soul was kept in your care.

The reader can clearly see that Muhammad included this account in his creation account in the Qur’an. Sura 23 says:

“It is He Who has created you from dust then from a sperm-drop, then from a leech-like clot; then does he get you out (into the light) as a child: then lets you (grow and) reach your age of full strength; then lets you become old,- though of you there are some who die before;- and lets you reach a term appointed; in order that you may learn wisdom.” [40:67]

Muslims brag about certain words in the Qur’an that were not mentioned before, thus asserting it as a miraculous books

Here are some words

that was singled by Quran and supposedly never been mentioned before, which is the word “SEED” [al Notfah]:

Al Naimi [ النابغة الجَعْدي توفي نحو 670م – نحو 50 هـ] said: "The creator, that gives our image in uteruses, first, as water until it turns to blood ''

In fact, the Qur’anic jargon about creation is found in one of his poems.

While the poet died after the death of Muhammad in 632 A.D., the existence of such poetry leans to asserting Qur’anic plagiarism. Great Poets did not need to steal from Muhammad. Their language abilities were much higher. 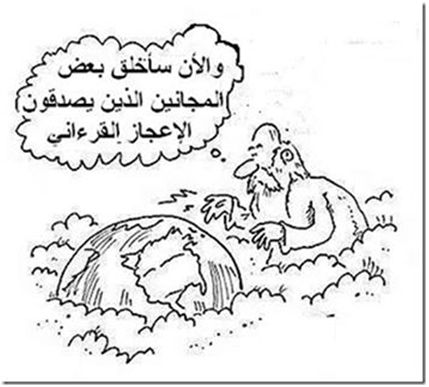 This translates to using the word “Nutfa” as a beginning of the human fertilized egg, and then commanded by Allah to stay in a hidden place and go through certain stages.

Here is Quran's mentioning of the ''Notfa'' [SEED]

''We made man from mud, Then placed him as a drop (of seed) in a safe lodging ''

''!We create man from a drop of thickened fluid to test him; so We made him hearing, knowing.''

With regard to the creation of man and the use of the word “Nutfah”, it is the Arab poets and not Muhammad who should take credit for that word. The early Arabs used and knew of, the word " NOTFAH '' way before the existence of Islam. It is an absolute lie to attribute it to a miraculous Qur’an. If ''NOTFAH'' is going to be attributed to someone, then, it should have been attributed to the early Arabs, not to Quran.

The above is partial evidence about Qur’anic plagiarism from the Arabic poetry of old. There are many Arabic sites that expose the myth of a miraculous Qur’an. Many detail how much piracy of the Arabic poetry was done by Muhammad to make it soothing to the listener through playing his tunes. Arabs of old loved poetry. Muhammad utilized this fact in his “revealed” Qur’an.

The author would like to thank Ibn Kammuna for reviewing and improving this article.