President Obama, visiting a slave-fort in Ghana, condemned slavery, pointing to a chruch that stood next to the slave-dungeons, to obviate the popular paradigm as to how European Christians, with sanctions from the church, engaged in black slavery, probably the only slavery that existed in history and is worth condemning. But Islam—whose role in slavery is much bigger, crueler, and more tragic—remains thoroughly untouched; as if Islam and its followers were/are untouched by the vice of slavery.   [Read in Bangla]

It’s a popular wisdom that the only slavery existed in history is the black slavery, whereby European traders captured and transported black Africans to the New World (Americas, West Indies).

Ask a Muslim; he/she will tell you so. An America-born young Muslim wrote to me: “Do you know how the American slave-hunters went to Africa, seized the black people and brought them to America as slaves? America’s economic power owes a great deal to the labor of those slaves.”

Nation of Islam’s Louis Farrakhan terms the trans-Atlantic slave-trade "worst and most cruel slavery" in history, adding that some white Americans do not know that "they are in the privileged position… based on what happened to us (Blacks)" in the past.

An overwhelming majority of Muslims believe that Islamic history is devoid of the abhorrent practice of slavery. Rocky Davis (aka Shahid Malik), an Australian Aboriginal convert to Islam, told the ABC Radio that “Christianity were the founders of slavery. Not Islam.”

Indeed, from my own experience of living as a Muslim for 35 years, this is one of the major reasons of why anti-West hatred is so strong amongst Muslims.

When Muslims in India talk about the practice of slavery in the subcontinent, they talk about the harrowing tales of how the Portuguese transported slaves from coastal areas of Goa, Kerala and Bengal in terrible conditions, and nothing else.

However, when I investigated, I was shocked to discover that Muslims—armed with divine and prophetic sanctions—practised slavery of a much greater proportion and tragedy, which I have discussed in my recent book, Islamic Jihad: A Legacy of Forced Conversion Imperialism and Slavery.

It is fortunate that President Obama, visiting a former slave-trading fort in Ghana on July 11, condemn this dark chapter in human history rightly as a “great evil”, adding “As African-Americans, there is a special sense that… this place was a place of profound sadness…”

Obama also pointed to a church, standing next to slave-dungeons, to obviate the paradigm as to how European Christians, with sanctions from the church, engaged in black slavery. 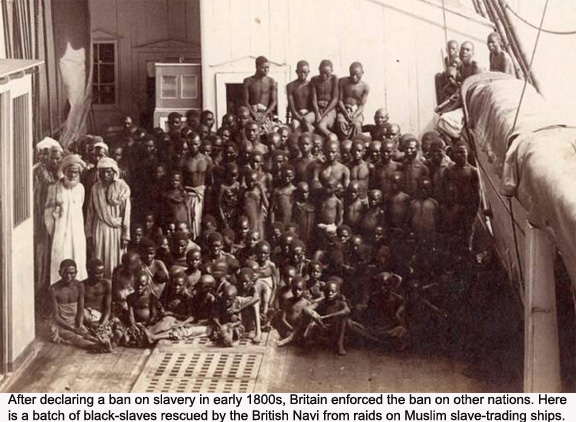 Islamic history informs us that Prophet Muhammad himself, armed with affirmed and reaffirmed divine sanctions (Quran 16:76, 30:28, 16:71, 70:29–30, 23:5–6, 33:50 etc.), initiated Islamic slavery by enslaving the women and children of a number of Arabian tribes (Quraiza, Khaybar, Mustaliq and Hawazin etc.). Later, as Islamic power grew in leaps and bounds, slavery witnessed a tremendous burst on the world stage. Everywhere Muslims won victory, the women and children of the vanquished were enslaved in massive numbers: General Musa enslaved 300,000 in his conquest of North Africa in 698 and returned from his conquest of Spain in 715 with the Caliph’s one-fifth share of the booty that included 30,000 white virgins from the Visigothic nobility alone, while Sultan Mahmud returned from his invasion of India in 1001–02 CE with 500,000 enslaved women and children. This is only a tip of the iceberg.

No small victims of Islamic slavery were Europeans themselves, who started falling victims to Islamic assaults in the Mediterranean islands within two decades after Muhammad’s death. And it continued well into the 19th century: the Ottomans, even in their decisive defeat and retreat from the Gates of Vienna in 1683, returned with 80,000 white captives, while Barbary pirates enslaved up to 1.5 million Europeans between the 1530s and 1820s, from European merchant-ships off the North African coast, plus from slave-raiding expeditions to costal villages and islands of Europe.

Even American merchant-ships and their crew suffered horrible Barbary depredations and enslavements. Prior to independence, Britain negotiated the release of captured American ship-crews whenever possible paying heavy ransom. After 1776, America signed treaties with Barbary States for securing safety of her ships by paying hefty tribute. To placate Muslims in Cairo speech, President Obama flaunted this humiliating treaty on America’s part as a respectful past relationship between Islam and America. As demand for higher ransom and depredations of U.S. ships continued, America had to engage in a difficult war to stop horrible enslavement of Americans in North Africa. Putting an end to continued enslavement of Europeans was a major reason behind France’s invasion of Morocco in 1830.

It’s noteworthy that the Europeans, Obama’s exclusive target of condemnation for slavery, were subjected to Islamic enslavement in the cruelest form for some eight centuries, before they themselves embarked on the practice—the widely condemned trans-Atlantic slave-trade.

Moreover, even in the European slave-trade in Africa, it was Muslims—the well-established masters of slave-hunting, -breeding and -trading for many centuries—who supplied over 80% of the slaves to European traders, the latter mainly purchased and transported them. The European slave-trade only offered a stimulus and played a lucrative partner for Muslims to a long-established Islamic vocation in Africa.

What is accurate about Obama’s statement about slavery in Ghana is that European slavery was “where the journey of much of African-American experience began”. The cruel aspect aside, it left a positive end of some kind: the Black Diaspora in the new world, definitely more fortunate today than their left-behind brethren.

Yet, this is only half the truth. There was another African slave-journey—lasting longer and larger in magnitude—that began with the Arab Muslim invasion of Africa in the 7-8th century. And it has left behind no residue whatsoever, an extermination of human species of huge magnitude—thanks to universal castration of black male-slaves destined for Islamic markets.

The inhumanity of Islamic castration of immense number of African men wasn’t the robbing of their most natural identity and endowment, i.e. their manhood, alone, but mortality in castration was about 75 percent. Overall mortality-rate of black slaves headed to the Islamic world, from procurement to reaching the destination, was as high as 90%, but their mortality in transportation by Europeans to the New World was about 10 percent.

Obama’s condemnation of European-Christian slavery, a horror chapter in history, is laudable, but his exclusion of Islam, the crueler partner in the same crime, is not. It does gross injustice to those unfortunate souls that suffered from this tragic Islamic scourge. And those souls also include millions of Christian Europeans, his sole target of condemnation.

European slavery has been thoroughly condemned by all and sundry—Europeans or non-Europeans, Christians or Muslims, scholars or laymen. And despite, Europe’s singular and forceful role in its abolition and from where slavery has been effectively abolished, anti-slavery campaigners have long called today’s Europeans to assume greater responsibility for past slavery and take concrete actions, such as payment of reparations, to combat slavery’s destructive legacy. But Islam—whose role in slavery is much bigger, crueler, and more tragic—remains thoroughly untouched; as if Islam and its followers were/are untouched by the vice of slavery.

In fact, some Islamic countries (Mauritania, Saudi Arabia & Sudan) have continued practising slavery to this days, while Sudan has intensified it in recent decades, thanks to lack of criticism of Muslim engagement in slavery, whether historical or present. Some 600,000 souls in Mauritania remain shackled in continued slavery with no hope for liberation in sight, while tens of thousands of Christians, Animists and even Muslims have been kidnapped and reduced to slavery in Sudan since Islamists came to power in 1985 (Khan, Islamic Jihad, p. 347–49).