The Making of the Muslim Mind

How Muslim minds are groomed to become lifelong zombies that they can't apply minimum logic and reason to discover numerous obvious errors and contradictions in the Quran and that they consider the most horrendous, unethical and barbarous actions of Muhammad as acts of great morality and humanity...

Having discovered the truth about Islam, I frequently ask myself those same questions: how did I do that? When I look at Islam from where I stand today, all its lies, absurdities and cruelties appear crystal clear to me. So, why it took me so long to see the most obvious? 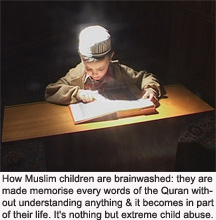 From my own experience, I think it has to do with, what I believe, to be the most extensive brainwashing process a human can ever be subjected to. The Islamization of the Muslim mind is a process that starts immediately after birth and continues throughout his/her life. After birth, an adult holds the child and recites the azan, the call for prayers, directly into ears of the newborn. The moral of the practice is to prime the child’s hearing with the blessed names of Allah and Muhammad. Indeed, that call for prayers soon becomes the most frequently heard sound by Muslim children. The azan is repeated five times a day in every mosque in the area. If there are ten mosques in the area, which is common nowadays, the azan would be heard, through the loud speakers, fifty times a day. In addition, the newborn’s ears will get used to hearing the endless recitations of the Quran that go on almost continuously. 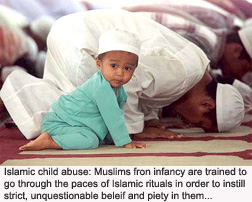 As Muslim children grow up, he/she hear more and read more of the Quran. The newborns open his/her eyes to the scenes of people performing the prayers, and grow up to the familiar sight of walls decorated with posters of Arabic calligraphy of some Quranic verses. Those Quranic posters, Islam’s only visual art, soon become mandatory sights in any Muslim houses, they may visit. Soon, the mind of Muslim children gets the message that there is something very special about the Quran, which they are destined to read hundreds of times without ever understanding it.

At home and at school, Muslim children get thorough Islamic training, which, in a way, is similar to the training of circus animals: both respond impressively to commands without understanding or questioning why. Muslim children are trained to recite, by heart, the short chapters of the Quran and to give pre-formulated answers to specific questions, like who your god is and who your prophet is. In addition to this, children are introduced to basic Islamic logic in the form of hypothetical arguments designed to convince a child about Islam. Interestingly, most Muslims use those same arguments to defend their religion even when they are adults.

The following are some of the ‘logical arguments’ that are used to make the young child believe that Allah exists and that Islam is the only religion, acceptable to God.

Muslim children become completely convinced that Islam is the right religion and they cannot come to terms with the fact that there are people who follow other religions despite the damming evidence against them. They learn that ‘Alkufr Inad’ which means that all infidels know deep in their hearts that Islam is the right religion but they reject it to avoid the humiliation of appearing to be wrong. Muslims feel lucky to be born as Muslims, hence their common maxim in Arabic ‘Al hamdu lilahi al ni’mati el Islam’, meaning praise be to Allah for blessing us with Islam. With so much luck, Muslims feel they should be thankful to Allah by devoting their lives for His worshipping.

Muslim intellectuals spend years, indeed their whole life, reading and learning the Quran without ever noticing any of its errors. Instead, they cleverly camouflaged them in a background of deliberate errors and abnormalities. The errors and contradictions in the Quran just blend well in its general image of being an abnormal book, a fact they use to their advantage.

The Quran is made to look abnormal because of the excessive use of diacritical marks, which are used scarcely in other books. It is also made to look abnormal because it is not printed in the usual Arabic fonts and doesn’t follow the Arabic writing rules, which makes it look as if it contains excessive typographical errors. From the Muslim point of view, the disorganised Quran, with all its repetitions, contradictions and errors are just proofs of its divinity, because humans do not write books in such ways.

Muslim scholars continue to stress on the eloquence of the Quran. They stun their audience by discussing in details the use of particular words in particular verse to deliver a precise meaning. They carefully avoid discussing the controversial verses and claim that the repetitions are there for a purpose. They claim that the same verse may have a different resonance in the Muslims’ hearts, depending on its location.

How Muslims learn about Muhammad

Islam emphasises the perfect image of Muhammad, who is portrayed as the best man Allah ever created, or will ever create, to the end of time. Muhammad is considered as an extraordinary blessing from the moment he was born; he was perfect even as a child. His name, which means highly praised, was an extraordinarily beautiful name not used by the Arabs before, as if it was reserved for Muhammad (see note1). The following are some examples of the blessings of Muhammad, which Muslims learn (see note 2):

Everywhere in Islamic teachings, Muhammad is portrayed as a man of high morality, who stood by his principles; a hero, who defended the rights of the oppressed and the poor; an enlightened man, who waged wars against backwardness, corruption and oppression.

When Muslim scholars discuss any of Muhammad’s murders, they choose a special language that helps their conscience remain untouched. The murder of Asma Bintu Marwan was one of the many disturbing assassinations ordered by Muhammad. All those disturbing murders are cleverly removed from the centre of attention in Muhammad’s sira (biography) and kept in the shadow. Most ordinary Muslims don’t even notice them; even if they do, they do not realize the scale of his cruelty. As an example, this is how ordinary Muslims would read about Muhammad’s assassination of Asma Bintu Marwan:

From the beginning, the victim was made criminal. The word murder was not even mentioned anywhere; the whole story was made to look as if Muhammad was performing a simple religious ritual.

It caught my eyes when I read about Muhammad’s marriage to Safeya Bintu Huyai. This took place in Khaybar, where the Jewish tribe of Banu Nadeer were raided in the early hours of the day (imagine how merciful that was!) and defeated by the Muslim warriors. The palm trees were set on fire, the chief of the tribe was tortured and killed, and women and children were taken as war-booty, called sabaya (slaves).

When the battle was over, Dihya, one of the companions, came to Muhammad and asked his permission to take one of the captured women to be his own slave, to which Muhammad approved. A short while later, a group of very jealous sahaba complained that the woman was actually the wife of the chief of the tribe, Kinana, who was just murdered, and was very beautiful. Muhammad ordered the woman to be brought to him; he looked at her and was stunned by her beauty. Islamic books describe the scene as thus: The prophet, peace be upon him, threw his gown on her as a sign that he selected her (Istafaha) for himself”. 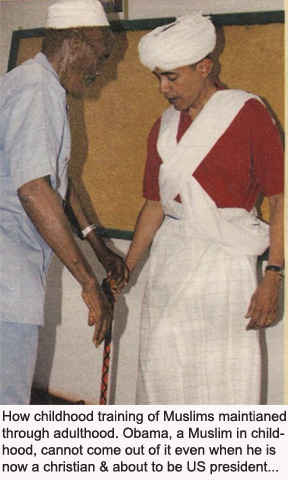 The word Istafa means ‘selected’; it is usually used to describe ‘blessed selections’. Muslim scholars go even further and describe this rape as an act of mercy! They praise Muhammad’s great generosity and high morality toward his enemy’s wife by offering her two golden opportunities to elevate her status: Islam and becoming the prophet’s wife! Indeed, Safyia accepted Muhammad’s offer (the alternative was to remain as Dihya’s slave) and joined Muhammad’s harem to be fortunate to hold the exalted title: ‘mother of the believers’.

I find it particularly shocking that intellectual Muslims read the story and become touched by Muhammad’s high morality and mercy towards his enemies. I discussed the story with many Muslims, and was amazed at how many of them actually didn’t notice that Safyia’s husband was brutally murdered only a few hours earlier. Their minds were overwhelmed by Muhammad’s incredibly ‘high morality’ to notice Safyia’s ordeal. They were too busy praising Muhammad’s morality to notice that even wild animals do not think of sex after all those scenes of the bloodbath that resulted in the actual extinction of an entire tribe. But Muhammad slept with her on the same night in a tent, strewn with dead-bodies all around.

Although Muslims spend their lives reading about Islam, but they never read it with objectivity. The Muslim mind and sense are crippled, when it comes to objective reading of Islam, thanks to thorough brainwashing they receive from infancy. It may not be possible to undo a lifetime’s process of extensive indoctrination by reading a critical article. Islamic indoctrination is an abuse of human mind; and there is an urgent need to tell Muslims the truth about Islam by systematically and consistently exposing its lies.

Note 1. There were a few named Muhammad, so our Muhammad was not the first. In the sixth century Arabia, rumours were circulating that a prophet will be borne and his name will be Muhammad, therefore, some Arabs started to name their children Muhammad. Others acquired the name after they claimed to be prophets and this is probably how Muhammad acquired his name. There are reports that Muhammad’s original name was Quthem but there is no way confirming either claim. There is evidence that Muhammad had the habit of changing the names of his companions to more suitable names, like Abu Bakr’s name.

Note 2. None of the above claims can be confirmed.

Note 3. Al Ameen (Trustworthy) is a title that used to be given to a person who looks after a trade, like saying the treasurer. If the claim is true, which probably is not, Muhammad probably earned it when he looked after Khadija’s trade business.

Note 4. The claim that Muhammad was oppressed in Mecca is simply not true. Please read MA Khan’s Islamic Jihad: a legacy of forced conversion, Imperialism and Slavery (Chapter 3)