Jihadists in Kenya Mall Massacre: ‘All Muslims Leave, We Want to Kill Non-Muslims Only’

Al-Shabab, a Jihadi Islamist militia from Somalia in an attack, reminiscent of the Mumbai and Boston Marathon Massacres, on a Nairobi shopping mall in Kenya killed 59 and wounding 175. According to eye witnesses, al-Shabab Jihadists targeted only the non-Muslims by declaring: “All Muslims leave, we only want to kill non-Muslims!” Well, that's exactly what Allah teaches Muslims in the Quran [48:29]: "...Those who follow him are harsh to the unbelievers but merciful to one another"

The killing was indiscriminate. They didn't care about whom they murdered, whether women and children. 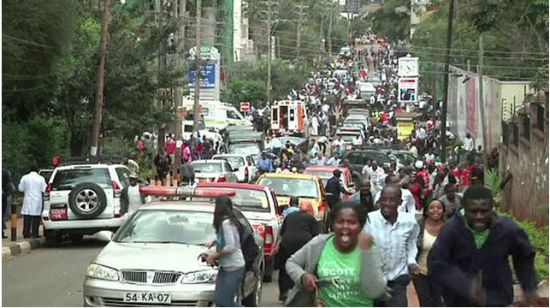 These murderous al-Shabab Jihadis are good, moral Muslims following exactly the teachings of the Quran, like that verse 3:151, "Soon shall We cast terror into the hearts of the Unbelievers", and the Sunna of Prophet Muhammad, who committed many massacres, in which women and children also became the victim.

Muhammad, a brutal murderer, said it would be permissible to kill a child, who has no prospect of accepting Islam (Sahih Muslim 4457):

The Messenger of Allah (may peace be upon him) used not to kill the children, so thou shouldst not kill them unless you could know what Khadir had known about the child he killed, or you could distinguish between a child who would grow up to he a believer (and a child who would grow up to be a non-believer), so that you killed the (prospective) non-believer and left the (prospective) believer aside.

After capturing Mecca, the prophet of Islam also ordered the execution of two “singing girls”, who had mocked him in their singing verses:

“…two singing-girls Fartana and her friend who used to sing satirical songs about the apostle, so he ordered that they should be killed…” (Ibn Ishaq/Hisham 819)

Muhammad was told about the various murders, including that of the sleeping shepherd, whose only "crime" was his saying that he would never be a Muslim. His reaction:

[Muhammad] laughed so that one could see his back teeth. He asked me the news and when I told him what had happened, he blessed me. (Tabari 1441)

“When the apostle ordered him to be killed, Uqba said, “But who will look after my children, O Muhammad?” [Muhammad’s reply] “Hell.” The man was put to death. (Ibn Ishaq/Hisham 458)

So, the al-Shabab Jihadis in the Nairobi mall massacre of the kuffar are perfect followers of the holy prophet of Islam. For us, this massacre will become a distinct memory tomorrow, but for those who lived it or lost loved ones – or were maimed forever, the terror will be with them until the day they die.

Imagine that many Kenyans and other visiting nationalities, who woke up in the morning and did their morning rituals, before heading to this mall for a Saturday outing only to be met with a hail of bullets from guns of Muslim Jihadis, looking to murder only the non-Muslims in the crowd.

This may appear incredible to average non-Muslims, but not to the dedicated Jihadi soldiers of Allah. This is just what the Islamic God did after the Massacre of Banu Qurayza when Muhammad beheaded 600 to 900 Jews, including young boys having the slightest trace of pubic hair.

Do you not hear the screaming and wailing of the women and children of the defenders as God brought their husbands, fathers and brothers (the defenders) down from their secured positions and cast terror into their hearts? Do you not feel the anguished torment of these women and their children? Do you not understand the terror instilled by God into the hearts of the defenders, besieged by Muhammad's army?

Hate and terror stream out from the teaching 33:26: "He [Allah] threw terror into their hearts" and "some you slew (beheaded)." Like a sadist, Allah enjoys torturing these people. Like a master terrorist, He rejoices the moment. God drove the Jews out of their secure forts by striking them with fear and terror, so that Muhammad and his co-jihadists could murder them and enslave the women and children.

While a non-Muslim may think that God would never commit such a brutal, immoral and hideous act, but that exactly what Allah, the Islamic God—a criminal, mass murderer, sadist, psychopath, deranged maniac—committed as per the divine verses of the holy book of Islam.

Just as Muhammad—following Allah’s commands in the Quran—did to Banu Qurayza, so have the al-Shabab Jihadis at the Nairobi mall: Cast terror into the heart of the unbelievers. The pictures of the largely non-Muslims crowd, streaming out of the mall by the hundreds shows the kind of terror those Jihad have stricken into their heart.

One should take note of the fact that Kenya—just like India—is a predominantly non-Muslim country, where only 11% of its population are Muslims. As the Muslim population increasing quickly in Western countries, it may be only a matter of time that malls in New York, Chicago, Los Angeles, Toronto, London, Paris, Brussels and other Western metropolis will become the scene of similar massacres by Muslim Jihadis in the years and decades to come. In fact, many such plots in the West have been foiled already.