3)  Conscription and Murder of Armenian Men -- On February 25, 1915, Enver Pasha sent an order to all military units that Armenians in the active Ottoman forces be demobilized and assigned to the unarmed labor battalions. Conscription included males from 16 to 60 years of age. Disarmed, they were then marched off into remote areas and executed. This was part of a premeditated strategy prevent any resistance to the forced relocation of the remaining women and children.

4)  Death March for Women and Children to the Syrian Desert -- The Armenian women and children were marched out to the Syrian Desert beginning in 1915. Many of the young girls were sold off as sex slaves to an active Muslim market. There is no evidence that the Ottoman government provided the extensive facilities and supplies that would have been necessary to sustain the life of hundreds of thousands of Armenian deportees during their forced march to the Syrian Desert (Deir ez-Zor) which was over 700 miles from Constantinople. (By comparison, the infamous Japanese Bataan Death March of World War II was only 60 miles.) Eye-witnesses saw thousands of deported Armenians under tents in the open, in caravans on the march, descending the river in boats and in all phases of their miserable life. Only in a few places did the Government issue any rations, and those are quite insufficient. The people, therefore, themselves were forced to satisfy their hunger with food begged in that scanty land or found in the parched fields. Naturally, the death rate from starvation and sickness was very high and was increased by the brutal treatment by the Ottoman Empire authorities. With few exceptions no shelter of any kind was provided, and the people coming from a cold climate were left under the scorching desert sun without food and water. Temporary relief could only be obtained by the few who were able to bribe the officials.

Before World War I, the Armenian population in Turkey was about 2 million, and only about 500,000 after the war, thus arriving at the total killed through deliberate genocide at 1.5 million souls. Similar high death tolls were experienced by Christian Greeks and Assyrians living in the Ottoman Empire. While it was a capital crime to photograph any of the genocide activities against the Armenians, some German soldiers stationed in the Ottoman Empire bravely took and saved the photographs we have.

The First Genocide of the 20th Century 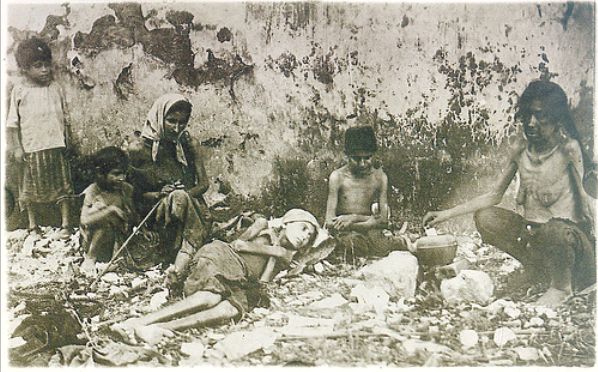 Turkey has used threats and intimidation to prevent any use of the word “genocide” with regard to what happened to the Armenians in World War I. According to their account, the Turkish War of Independence (1919-1923) resulted in large numbers of casualties -- both Turks and Armenians. However the estimated death toll for that conflict ranges from 60,000 to 400,000 for all parties to the conflict, and so the civil war in no way accounts for either the timeline or scale of deaths suffered by the Armenians alone. As the Los Angeles Times editorial stated on April 14, 2015, “Turkey’s disingenuous view compounds the original crime with the insult of denial... [T]he U.S. government has been complicit in Turkey’s defiance... The president should take a cue from Pope Francis and include the word genocide in his annual message marking the carnage a century ago. Enduring friendships require such honesty.”