How Muslims in America React to Trump Presidency: With Restraint and Moderation, or Fascistic Islamic Zeal?

After eight years of an Administration that refused to put 'Islam' and 'terrorism' in the same sentence, Americans have elected a President who has no qualms about calling a spade a spade – even if it ruffles a few feathers.

The new U.S. President has promised to engage in “extreme vetting” to ensure the safety of Americans from potential terrorist immigrants from Muslim countries. There is even a bill before Congress that would designate the Muslim Brotherhood and its affiliates as terrorist organizations. That would signal the end of CAIR, ISNA, and other MB organizations – or at least in their current forms.

In response to all of this, have Muslims resolved to lay low for a while or throttle back their militancy? Not at all. In fact, one of the principal organizations of Islamic jurisprudence in the U.S. – the Assembly of Muslim Jurists in America – has issued a fatwa (legal edict) with a militant undertone calling for redoubling piety and adherence to Sharia Law, Islam’s fascistic legal code.

Islamic Fascism defined -- Americans thought they had seen the last of fascism when Benito Mussolini was summarily executed by his own people in April, 1945. Italian fascism combined a nostalgia for the glory days of the Roman Empire along with an irrational persecution complex that pitted the cult against the modernity and freedoms of the surrounding world. The Islamic version of fascism, which came into existence around the same time under the tutelage of Hasan Al Banna and Sayyid Qutb, glorifies the “rightly guided” 7th Century companions of Muhammad and stands in opposition to reason and enlightenment. The superiority of Islam as compared with jahiliyyah (ignorance of the non-Muslim world) is an article of faith in spite of the observable facts.

Italian fascism crumbled under the weight of reality, even before the end of World War II. The Italians not only threw off Mussolini’s cult, but they bore no animosity toward the Allied powers which beat them to their senses.

Islamic Fascism in America today – The signs of Islamic Fascism are becoming more evident in our highly-interconnected society, but many Americans are still oblivious. The three most conspicuous indicators are: 1) the prominence of gang signs and symbols, 2) the increase in Islamic law-fare and Muslims-as-victims propaganda, and 3) the efforts to gain political foot-holds across America. Here is the evidence: 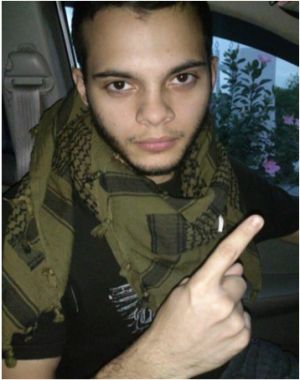 While men’s beards are in style even for non-Muslims, it is a specific requirement for Muslim men, per Reliance of the Traveler, paragraph e4.1(2). Islamists also post their fascist symbols in the social media. Here is the picture of Orlando airport terrorist, Esteban Santiago, allegedly from his Twitter account:

There is now a cottage industry in generating Muslims-as-victims stories, many of which are actually hoaxes. In one recent case, a teen-age Muslima, Yesmin Seweid, claimed she had been harassed by some pro-Trump whites on a Manhattan subway train. It later turned out that she was just trying to avoid punishment for drinking alcohol, dating a Christian, and staying out past her parents’ strict curfew.

Meanwhile, in California, Hussam Ayloush, the Executive Director of CAIR Los Angeles serves as a delegate for the Democratic National Committee. He has maintained his toe-hold despite recently wishing that more Russians had been killed in the Dec. 25 plane crash.

Muslim Jurists’ fatwa – Principles and Roadmap -- Readers can study the entire fatwa via the link posted above.  What is relevant going forward are the following commands:

1. Muslims must stick to Islamic orthodoxy and refer questions about Islam to the specialists.

2. The beliefs and legal foundations of Islam are “unalterably fixed.”

3. Do not argue over details of Islamic law, or engage in ijtihad (independent reasoning).

4. Muslims must avoid sectarian disputes; they need to stay united.

5. Reach out to other ethnic groups, other religions, other political factions to form alliances with them. (These people are sometimes called “useful idiots.”)

6. Support the established Muslim organizations with donations and prayers.

7. Revive your piety and renew the spirit of repenting to Allah.

The fatwa also contains some veiled threats which Muslims would recognize by the wording that echoes edicts from the Quran:

There is no blame on a country as long as it does not transgress or oppress [Muslims].

“The blame is only against those who oppress men and wrong-doing and insolently transgress beyond bounds through the land, defying right and justice: for such there will be a penalty grievous.” (Surah 42:42)

It is possible that an individual hates something while Allah has placed a lot of good for him in it.

We must prepare for any possibility.

“Prepare whatever forces you can so that you might frighten Allah's enemies and yours, and to frighten others unknown to you but known to Allah. Whatever you may do in Allah's cause, will be repaid to you in full and you will not be wronged.” (Surah 8:60)

(This is also the motto of the Muslim Brotherhood.)

It is clear that the Islamic fascists are already drawing the battle lines – even before the next President is sworn in.