The Islamist Delusion – From Islamist to Cultural Muslim Humanist (Book)

"The Islamist Delusion – From Islamist to Cultural Muslim Humanist" is an insider's look at behind-the-scenes Islam. Written by a prominent anti-Islamist activist over the course of 8 years, detailing his reasons for leaving Islam and becoming an agnostic humanist. 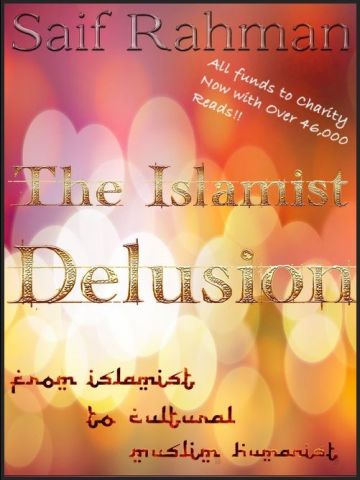 A comprehensive and objective study for Muslims seeking a fair and balanced analysis; and for non-Muslims interested in gaining rarely insights.

A single incident some eight years ago kickstarted the journey for this book. My Muslim cousin came to stay with us in the UK when he was over on holiday from Pakistan. I knew his stay would prove contentious as previously he had told me that as a Muslim I had to believe in all of it as it stood, or I had to admit I was no longer a Muslim. This time I was prepared for the inevitable question of "Why?" I had subsequently left Islam. Sure enough it soon came and started the ball-rolling till 4 a.m., as he attempted to refute each one of my contentions, but this time to no avail.

The following day, prior to boarding his flight back to Pakistan, he made me promise one thing. As he was well connected, he asked me to put together all my arguments that he failed to answer, so he could take them to a learned scholar of Islam. I did so, and was looking forward to his response. I also copied them to all my siblings. After 3 months, my brother received a phone call from the cousin, saying that he hadn't forgotten and was still working on the reply. It’s been 8 years, and I never did hear back from him.

Nonetheless, it was an invigorating exercise. Over the course of the next 8 years, I became an ex-Muslim activist and the original letter (contained in next chapter) was used as a skeletal working document, which I regularly updated with new findings. A comprehensive Scribd online blog was borne. It was heartening to see it climb to 46,000 views and being powerful enough to influence many of its Muslim readers to leave Islam.

To connect with a wider audience, I developed the blog for use in visual media, and from it spawned my 'ExMuslim Confession' YouTube series. It flourished as it climbed to half-a-million hits, but along with its success so did the harassment. My more vocal presence was paralleled with increasing resistance, reaching up to 139 death threats to date. Undeterred this spurred me on to make the blog ever more mainstream, and the original Letter-Blog-YouTube Series finally matured into the Book you see before you today…