How the Sikhs Countered the Brutality of the Foreign Muslim Invaders turned Rulers in India, Part 4 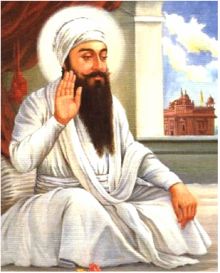 Guru Arjan Dev, the fifth Sikh Guru, was the youngest son of Guru Ram Das, born on 15 April 1563 in Goindval, Punjab. He was also the first Sikh Guru to be martyred by Muslim rulers.

Arjan Dev served as the Guru of Sikhism for a quarter of a century (1581 to 1606 AD). He constructed the Golden Temple, also called Harmandir Sahib or Darbar Sahib, at Amritsar, which is considered the holiest centre of Sikh pilgrimage. ‘Harmandir Sahib’ literally means ‘The Temple of God’.

The Golden Temple was rebuilt in 1764 by Jassa Singh Ahluwalia. In the early nineteenth century, Maharaja Ranjit Singh secured the Punjab region from outside attack and covered the upper floors of the Gurdwara with gold, which gives it its distinctive golden appearance.

Guru Arjun first compiled the teachings, values and philosophies of the Sikh Gurus and other noble saints, such as Baba Farid and Kabir, into a book called the Adi Granth, which would eventually become the Holy Sikh Scripture, the Guru Granth Sahib.

Guru Arjan Dev also founded the cities of Tarn Taran and Kartarpur (now in Pakistan) and built Sikh temples there. These temples, including the Harmandir Sahib, have four doors on all sides, symbolizing the openness of the Sikhs toward all peoples and religions.

When the Harmandir Sahib gurdwara was completed in 1604, Guru HYPERLINK "http://en.wikipedia.org/wiki/Guru_Arjan"Arjan installed the Guru Granth Sahib in it and appointed Baba Buddha as the first reader of it on August 1604. This turned the Harmandir Sahib into the holiest destination of Sikh pilgrimage.

In the mid-18th century, it was attacked by Afghan invader Ahmed Shah Abdali's general Jahan Khan and had to be substantially rebuilt in the 1760s. However, in response, a Sikh Army was sent to hunt down the Afghan force. Both forces clashed at a place five miles outside of Amritsar and Jahan Khan's army was destroyed.

Gurdwara Sri Tarn Taran Sahib: Gurdwara Sri Tarn Taran Sahib, another famous Sikh Temple built by Guru Arjan Dev in 1590, is situated in the city of Tarn Taran_Sahib in Punjab, India. Its foundation stone was laid by Dhan Dhan Baba Buddha, a famous Sikh saint (1506–1631). It has the distinction of having the largest water pond of all the gurdwaras and is famous for monthly gathering of the pilgrims on the day of moon-less nights. Again Maharaja Ranjit Singh gold-plated the Darbar Sahib in Tarn Taran as he had for the Harmandir Sahib at Amritsar.

Gurdwara Darbar Sahib Kartar Pur: Guru Arjun Dev also built the other famous Sikh Temple, Gurdwara Darbar Sahib Kartar Pur, in Kartarpur in the Narowal District in today’s Pakistan, where the first guru Nanak Dev had died on 22nd Sept. 1529—so also called Dera Nanak Baba. Located just 3 kilometers away from the India-Pakistan border, it continues to be another major center of pilgrimage for the Sikhs of India.

The greatest contribution Guru Arjan Dev made to the Sikh faith was to compile all the hymns of the past four Gurus into one book, the Sikh Holy Scripture Guru Granth Sahib. As already mentioned, he also included in it selected writings of the saints other faiths, which he considered consistent with the humane and noble teachings of Sikhism. The compilation of the Guru Granth Sahib was an important step for Sikhism to emerge as a separate new religion. Guru Arjan Dev also formally installed the Guru Granth Sahib at the Amritsar temple and Emperor Akbar had made an offering of 51 gold coins to it.

Guru Arjan Dev is also famous for organizing the Masand system, i.e. appointing a group of representatives to teach and spread the teachings of the Gurus and the building of new gurdwaras. He also strengthened the Langar system, which are open to visitors of any religious affiliation and were designed from the start to stress the idea of equality of man and a casteless society.

Through the compilation of the Adi Granth (Guru Granth Sahib), Guru Arjan provided the Sikhs with a guideline for their moral, ethical and religious conduct. Apart from these religious initiatives, he encouraged the Sikhs to engage in trade and commerce as a profession to improve their economic well-being. The Guru himself took on the trading of horses. Furthermore, for improving the economic well-being of the peasants, which was closely linked to monsoon rains, Guru Arjan helped the villagers in digging six-channel Persian wheel (Chhehrta) wells for irrigating their fields. These measures helped improve the well-being and prosperity of the masses.

As Guru Arjan Dev had included the teachings of both Hindu and Muslim saints into the Guru Granth Sahib, inclusion of texts from the Islamic scriptures enraged the then Mughal Emperor Jahangir. He asked the guru to remove all the Islamic references from his holy book, which the guru declined. Meanwhile, Emperor Jahangir learned that many Muslims were deserting Islam and embracing Sikhism.

Emperor Jahangir anger toward Guru Arjun Dev intensified and turned into a mortal conflict after the emperor’s son Khusrau Mirza waged a ferocious rebellion against him in 1606, which was subdued with cruel atrocities. When Khusrau Mirza with a party of 3,000 warriors reached Taran Taran, he received the blessings of Guru Arjan Dev. This enraged Emperor Jahangir. He ordered that the Guru be arrested and tortured to death. Arjun Dev was tortured in the most horrible manner. He was made to sit on a burning hot iron sheet while hot sand was poured over his bare body. After five days of unrelenting torture, the guru was taken for a bath in the river. As thousands watched, he disappeared in the water never to be seen again.

Noted Sikh historian Dr. Harjinder Singh Majhail writes, "The martyrdom of the fifth Guru is a first turning point in Sikh history. It created circumstances, which gave a militant colour to a spiritually coloured, otherworldly people. The Sikhs for whom their Satguru i.e. True Master was dearer than anything else in the world, were never ready to accept their True Master's martyrdom. What pained them more was that their Master was mercilessly tortured to death. The fifth Guru was made to sit on big hot ferrous bread-baking plates and the burning sands from a parcher's furnace were poured on his bare body. After such inhuman tortures, the Guru was taken to the river 'Ravi' for a bath where he was said to have mysteriously disappeared into the 'Ravi'. All this was too much for the Sikhs. The blood-curdling tortures meted out on their beloved Guru made their blood boil. They sat brooding waiting for vengeance". All these grievances turned the Sikhs into a militant regiment, under the guidance of the sixth Guru Guru Har Gobind. We hope to discuss this development in the next part of the article.