The Free Syrian Army, the Islamist freedom fighters who have been fighting dictator Bashar Al-Asad, declared a new fatwa about how to deal with the lice that inhabit the deep forest of the Momin’s beards. By all means, you can not disturb, let alone, kill them, for they are special lice sent forth by Allah swt? Raping women in fine, killing the kuffar (i.e. Christians of Syria) is great, chopping anyone who questions Allah into pieces is a must, and even eating the livers of dead opponents is fine. But for the sake of “Allah”, please do not disturb the lice in Momin’s Beards! 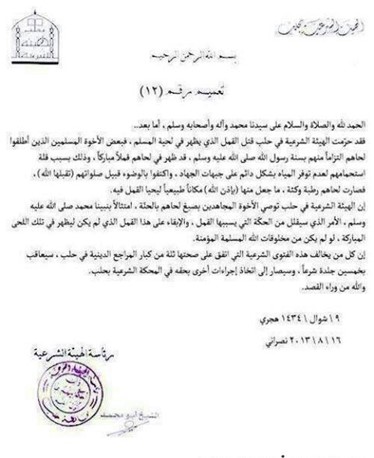 Last week a new fatwa, or religious advisory opinion, appeared in Aleppo prohibiting shaving of lice infested Muslim beards or attempting to kill the ‘believer lice growing in blessed beards’ under a medieval sort of punishment. The following is the closest to literal translation to our best, and do welcome better suggestions for the translation.

By the name of Allah most merciful most gracious.

Thanks to Allah and prayers and greetings to our master Muhammad and his blessed family and companions, then…

The Shari’ah Authority in Aleppo has prohibited the killing of lice that appears in the Muslim beard, as some of the Muslim brothers who have released [grown] their beards in accordance with prophet Muhammad PBuH Sunnah [prophet's doctrine], blessed lice has appeared in their beards, and that’s because of their lack of bathing due to the water non-availability all the time on the Jihad [holy war] fronts, and they have limited to ablution before their prayers (may God accept it), thus their beards became moist and thick, which made of it (in God’s will) a natural place for lice to live in.

The Shari’ah Authority in Aleppo recommends the Mujahedeen [holy Islamic fighters] brothers to dye their beards with Henna, like our prophet Muhammad PBuH, the thing that would reduce the itching caused by the crawling lice, and to maintain these lice that would have not appeared in those blessed Muslim beards, if it was not from Allah’s Muslim believing creatures.

Who disobeys this Shari’ah fatwa [advisory opinion] which has been confirmed right by a number of the senior scholars in Aleppo, will be punished with 50 lashes by Shari’ah Courts, and other measures will be taken against him in the Shari’ah Court in Aleppo.

And Allah swt was behind our intent.

I leave it to the reader to ponder about this fantastic Islamic fatwa. Nonetheless, this fatwa will probably render justification once again is to why we say at Islam-Watch.Org that Islam is an atavistic, primitive, 4th-century Bedouin religion from the wasteland of the Arabian deserts.