Description of the painting (see inside)

This painting depicts a group of women gathered in a circle around their leader "Munirah Qubsia”. I got the idea of this circle while watching a video showing women gathered around her waiting on every move she made and every syllable she uttered. As usual I sketch any ideas for a new paintings right away before they disappear. I drew it and what came out is exactly what you see in the painting except for the 4 extra arms and the things the arms held, which I added later.

The figure in the middle depicts Munirah as the master of slaves. She has a hold on them mentally. But they aren't aware of it. The chains of Islam are invisible.

I depicted Munirah growing out of the Quran. Her roots are deeply ingrained in it, which is where her power comes from. 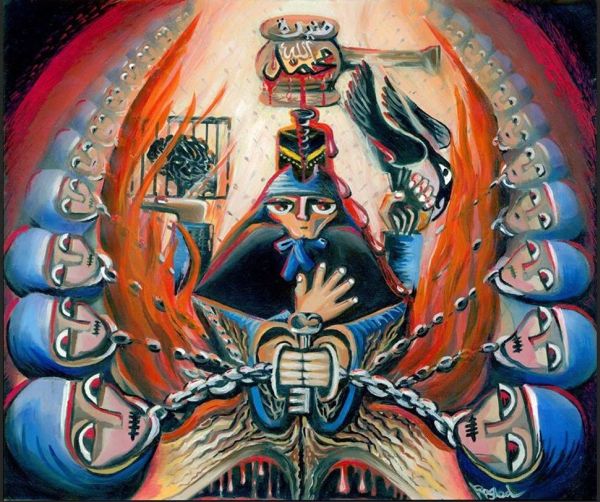 Notice how her head has a dent. I wanted to show a hint of horns, under the holy head cover. I was trying to convey veiled stubbornness and aggressiveness. I’m interested to know what you think the horns convey.

I painted the Ka'aba on top of Munirah’s head as if it is secured to her brain with a large nail that is being hammered by a judge's hammer, to convey authority and submission.

The judge's hammer conveys judgment, but not fair judgment. It’s unfair in the sense that in the mind of a standard muslim, Allah takes top command, then Muhammad his prophet.

Notice the names of the chain of command written on the hammer. I was trying to show that in the mind of the Qubsiy-muslimah, Allah does not take lead in judgment and instead Munirah's approval is required to even pray to Allah.

The fire surrounding the women represents the punishment these women believe they are going to end up if they do not obey, the weapon that they are controlled by Munirah backed by her religion Islam.

Munirah’s figure has 5 hands, depicting the many roles she plays in her relationships with her followers.

Two hands holding the chains of control and manipulation, retraining the women with iron-fist with the key in hands, shown to us but not to the followers. Her followers do not see the chains nor the key — their eyes are blinded to such a slick jailer. They are mesmerized with devotion they who can not see the binding chains.

The left hand holds a crow — from it’s legs the bird is trying to brake free from her hands but it is not able to. The crow is a remarkable creature that symbolizes intelligence, and even he can’t
break free.

The right hand holds a birdcage with no birds in it, yet inside is a human brain. It represents all the Muslim brains who blindly follow an ideology.

How I created the painting...

I was asked to create this painting by Mr John Silver for the subject of the article "Al Qubsiyat" the Muslim women organization in Syria, which has a very interesting story I wanted to share.

I was told about this painting while I was not in my home town. So thinking I had a short time I started right away. I started paining on a stretched canvas with oil paint. After the initial drawing and 2 weeks of work, which was about half done, I had an unexpected emergency and needed to go back to my home town. I had a dilemma.

What to do with my half-done painting? How am I going to pack it and take it? It was too big for my small suitcase. Somehow I thought it might work to take a picture of it at a photo scanning place and ask them to scan the photo on a new canvas they provided but smaller size of the original. The scan was done and I looked at it, I saw as if it was the actual painting. I thought of this quote, "necessity is the mother of invention.”

I rolled the soft canvas up and I traveled with it back home where I proceeded to paint over the scan of the painting to finish it. It was a successful maneuver!