On 9 February 2014, we reported that the Spanish police picked up Pakistani-born Ex-Muslim critic of Islam Imran Firasat from the street and immediately started his expulsion procedure, ignoring his plea that his appeal against the revocation of his Refugee Status was with the Supreme Court. Only timely intervention by Firasat’s lawyer prevented his forthwith deportation to Pakistan where he faces definite death penalty or mob lynching.

Although the police failed in its bid to deport Imran Firasat immediately, police officials forwarded the expulsion procedure papers to the Police Headquarter for issuing his expulsion, ignoring the pending Supreme Court hearing of his appeal. And an expulsion order was duly issued by the Spanish Head of Police department within a month.

This whole saga makes it obvious how eagerly the Spanish authorities are trying to throw Imran Firasat out of Spain – all for exercising his right to freedom of expression concerning Islam and Prophet Muhammad, and for which they are even willing to ignore the Spanish law. Attached here is a video on the coverage of the case on Canada’s Sun TV. 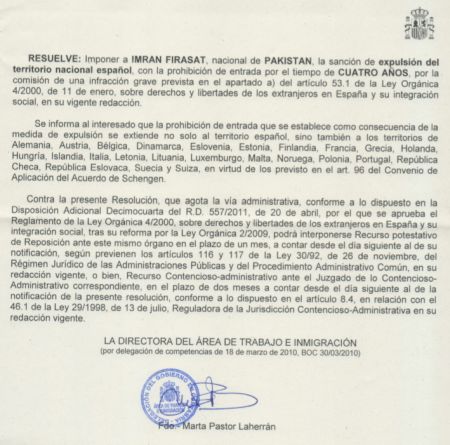