Novelist Robert Ferrigno's image of Islamic States of America (ISA) in his futurist novel, Heart of the Assassin...

After 9-11, I wrote an article in The Tribune that reminded of Mario Puzo's prophecy of destruction of New York in one of his lesser known novels The Fourth K, though with a lot of differences. For one, the perpetrators in Puzo's novel are scientists and they use not hijacked aircraft but home-assembled nuclear fission devices to bring about devastation of New York.

Novelists—with deep insight into history, politics and keen sense of what psychological and social upheavals around them are going to bring about—often end up with creating such remarkable divinations. Robert Ferrigno—who, according to a NYT reviewer, writes fiction that is "truer than truth" and "will echo disturbingly through our minds and hearts long"—is one such novelist. Out of eleven crime novels he has written since 1990 the three that stood out and created a stir in America are what is collectively known as "Assassin Trilogy", whose last part, namely Heart of the Assassin, came out in August this year. The political thriller, like its two pre-sequels, is set in a futuristic America that has lost the war on terror and fallen into bloody hands of terrorists, leading to USS Ronald Reagan being renamed USS Osama bin Laden! Barbie wears a burqa and the cheerleaders are no longer short-skirted cuties but bearded warriors—welcome to Islamic States of America, the dominating power of 2043 A.D. 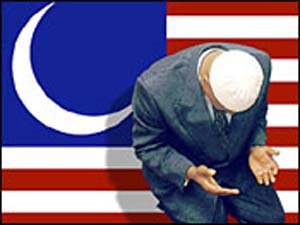 And it all begun in 2015 when anti-Zionism, the favorite pastime of pro-Islamic leftism reached its climax and the American media finally managed to blame the nuclear destruction of the major American cities on Mossad (Israeli Intelligence), and, as a protest, many a leading personality of the day converted to Islam resulting in political isolation of the remaining sane America into a Christian Bible Belt. Mexico suddenly becomes Mexican Empire and begins to aggressively reclaim the dominions, it thinks, it deserves. Some states like Nevada and Utah split off as discrete territories. It is a country, in which university professors can lose their jobs for being "insufficiently Islamic", cellphone cameras are illegal, and men can now only dream of loud music, cold beer, and coed beaches. Life is especially hard for women, who may not leave their homes without written permission from a male relative, and even then risk being whipped by the Black Robes—the Sharia-enforcing religious police—if even a lock of hair slips out from beneath their headscarves, or in case, they neglect to keep their ankles covered. Repression, of course, is at the heart of fundamentalist Islam.

Millions are unemployed, poor and uneducated living under a censored environ that forbids criticism of any kind under the sway of a totally controlled Orwellian state—a far cry from the lavish liberty and freedom of speech we enjoy in today's America and American dominated world. Mohammed's dream is finally realized: minds controlled by the state, homosexuality and blasphemy are capital offenses, and non-Muslims are, at best, second-class citizens.

In order to make the upcoming horrors more vivid, the publishers even launched a pseudo-news website of the future, complete with advertisements of "Jihad Cola" etc.

The news-site is jokingly "updated" on March 25, 2036 with details about the ISA (Islamic States of America), the dim world it dominates, the morbid excuse for education in schools, sports events programmed with prayer breaks and a ship of Jews (the last ones left) drifting helplessly continent to continent begging for asylum (like the Sikhs once did aboard Koma Gata Maru, a Japanese vessel). The Jewish Holocaust has been removed from history books, not because the new elite does not necessarily believe it happened, but because "we don't care it happened, since it happened to them". Pupils are taught that the attack on WTC in 2001 was a "glorious revolutionary activity" and anyone questioning this 'fact' is likely to be beaten up. There are news about secret associations formed in order to watch movies (now an illegal activity). Confused young people expressing surprise at seeing that how scantly people are clad and bathe together in Jaws, and gather that, that was why, the old regime, which gave people too much freedom, failed. The Mount Rushmore has met the fate of the Buddha statues in Afghanistan under Taliban.

In a nutshell the novel is based around a intensely painful question: What if the West really does lose the war on terror? What if Islam, which is currently the world's fastest growing religion, achieves critical mass in the West? The Assassin novels are based on an unbelievable premise that millions of Americans convert to Islam, inspired by a whimsical Hollywood actress's revelation during her Oscar acceptance speech that she has become a believer! The author has spent two solid years researching Islam and it shows in the meticulous detail of Islamic mindset throughout the novel. In one scene a taxi-driver calls into the "What Should I Do, Imam?" show, and asks the Imam if there is any music that a good Muslim can listen to without going against the Islamic law. "Good question, my daughter," the imam answers. "The Holy Quran is quite clear that music is forbidden. One of the messengers of Allah said, 'There will be a nation who will make music their lot, and one day, while enjoying their music and alcohol, they will awake with their faces transformed into swine.’ In fact, this messenger said he was sent to destroy all music instruments… Instead of music, rather listen to the Holy Quran." It is interesting to note that the South African Mufti Ebrahim Desai is on record for giving the exact advice to a curious Muslims a few years back!

Can this really happen? Yes, Ferrigno told during an interview, mass religious conversions are always the result of outside forces colliding with internal needs, recalling the historical fact that the rapid swell of Islam during the eighth and ninth century offered racial and political unity among tribes scattered across Arabia, which, in turn, was the fountainhead of Islam's phenomenal imperialism. According to Ferrigno, one chief advantage the Islamists—who are, of course, careful enough not to talk too candidly about their long term targets—have is the fact that elites in academia, government, or the media generally do not like to talk about, for fear of being branded racist or "Islamophobic" and thus indirectly help the cancerous spread of Islam in West. Another thing he finds disturbing is the spiritual void at the centre of current Western society, due to which some people may actually find in Islam what mistakenly seems to be a comfort and reassurance in its moral certainty and firm standards.

The great and generous freedom we enjoy today is the result of sacrifice and hard labor of millennia by our forefathers, who struggled against Titanic odds to build a better world for the upcoming generation. The splendid glories of Western civilization, its superb arts, its technological wonders, like moon-landing and internet you are using now, are all under the dark shadow of Islamic imperialism, disguised as a religion of peace. The need of the hour is to make our governments aware of the clear and present danger looming right over our heads or our grandchildren shall be actually drinking Jihad-Cola.