Allah’s Challenges in the Quran and Its Missing Chapters

Allah threw open challenges to man as well as Jinn to create a book like the Quran or at least a chapter of it and that he would keep the Quran unchanged for eternity. He failed in both challenges. Find out why?

Challenging someone or an open challenging to all on an issue is a means of maintaining integrity of a challenger. It is not easy for someone to challenge on any subject, howsoever a master or expert one is in his/her field. One can throw a challenge only when he/she is 100% sure that he can never fail or be proven wrong.

Here, we will discuss about Allah, whom Muslims consider to be the god of the universe, who eagerly throw open challenges to mankind in the ‘Quran’. In this book, he asserts that his words are unchangeable (Quran 15:9) and brimming with his wisdom and that no one else in the entire universe can reach his level of elegance. He even challenges other creatures besides mankind, the Jinns (invisible creatures), to assist mankind to create a replica of the Quran or at least a single Sura (chapter), in order to prove that the Quran is not from God.

It was, indeed, a very brave challenge for Allah, intended to boosts His honor and the belief of skeptics that the Quran was truly a creation of God.

Allah in his book ‘Quran’ Chapter 2 in verse 23, that to produce single chapter as he has in his book Quran. Translation is as follows:

“And if you all are in doubt about what I have revealed to My servant, bring a single chapter like it, and call your witnesses besides God if you are truthful.” (Quran 2:23)

“Say: ‘If all mankind and the jinn would come together to produce the like of this Quran, they could not produce its like even though they exerted all and their strength in aiding one another.’”

Interesting point is that the Quran’s two shortest chapters contain only 3 verses. The names of the chapters are Al-Asr and Al-Nasr.

Some sects in Islam claim that two chapters---named Sura Al-Wilayat and Sura Al-Nurain---originally intended for the Quran, are missing from its current version. 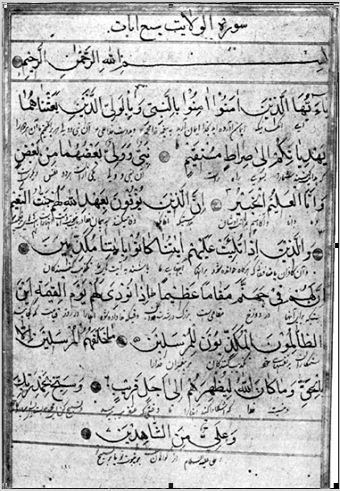 On the name of the all merciful God,

1. You who are believers, believe in the prophet and the saint (patron, God-man)"which is Ali Bin Abi Taleb, Mohammed cousin" which we sent, they will guide you to the strait path.

2. A prophet and a saint "belong to" each other, and I am the all knowing, the experienced.

3. Those who do (obey) God's covenant they "deserve" comforting paradises.

4. And those who if it read to them our verses, they contradict it.

[Meaning: If somebody (unknown) were to read the verses (from the Qur'an) to them, they reject would it.]
5. They have a great (big) place in Hell, if they called in the day of judgement: where is the unfair, the contradictory for the messengers?

6. The messengers don't leave them "without" the truth, and God "will not allow them" to win (appear, show) till a short time.
7. Praise your lord "and" thank "him", and Ali "Ali Bin Abi Taleb, Mohammed’s cousin, "one" from the witnesses. 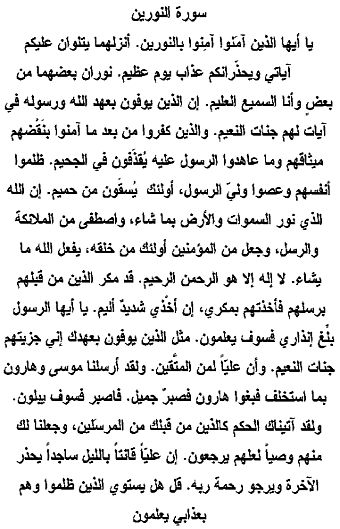 "O you who believe, believe in the two lights

He has revealed them unto you, warning you against the torture of the Great Day -- two lights emanating from one another, for I am the All-Hearing and the All-Knowing.

Truly those who fulfill Allah's pledge and his Apostle's verses shall be rewarded with Paradise.

Those who disbelieve by breaking their covenant and what they have pledged to do before the Apostle shall be thrown into hell, for they did injustice to themselves and disobeyed the supporter of the Apostle.

Therefore, they shall be caused to drink from the Hamim River in hell.

Truly Allah is the light of heaven and the earth as he wills, and he has chosen his angels and apostles and made believers of those whom he created.

All do whatever he wills. There is no god but him -- the Merciful and the Compassionate.

Those who came before them cheated their apostles, and so I have stricken them with my cunningness vehemently and painfully.

O Apostle! Preach my admonition, for they shall know.

Those who fulfill their pledge to you are likened to me to be rewarded by Paradise.

Truly Ali is one of the pious. We have sent Moses and Aaron, being appointed his successor, yet they disobeyed Aaron.

Be of good patience! They will become old. We have given you judgment, just as we did to other apostles before you. We have appointed a guardian to you from them, that they might return.

Truly Ali is devout, lying prostrate at night, warning as regards the Last Day, and hoping for the mercy of his Lord.

Say: "Should those who act unjustly be treated equally, while they know my torture?"

Today, these two Suras (chapters) are missing from the Quran. This claim has been made by a sub-sect in Shiaism. However, not all Shias hold this claim but stick, like Sunni Muslims, with the idea that the Quran has never been changed.

There is nothing strange, surprising or shocking in this attitude of Sunni Muslims, who tactically tried and are still trying to defend the action of Othman, the third caliph of Islam, who deteriorated credibility of the Quran by burning its original texts, after compiling whatever suited his interests.

However, what is strange, surprising and shocking is that the Shias, despite their scornful attitude toward Sunnis, have swallowed up as truth of “twelve imamates”, whatever the Sunni Muslim have dished out to them about the truthfulness of the Quran. They have provided the reason that there was confusion in Arabic grammar and pronunciation in various parts of Arabia at the time that made it difficult for many Arabs to utter the words of the Quran precisely; hence, the meaning of the Quran was misinterpreted. Consequently, they had to think seriously about this matter and the reformation in the Quran was higher necessity.

Here, I would like to shed light on the behavior of Shia Muslims against Sunni Muslims and their hatred toward each other. Shia Muslims, the followers of Ali, not only rejected and reject Abu Bakar and Umar, the first two caliphs of Islam, respectively, but the caliphate of Othman, who was, according to Shias, elected by fault. When Othman ordered to burn original texts of the Quran, he was nearly eighty. Apparently, a person in his late seventies can be easily manipulated; on the other hand, Othman also appointed his kinsmen and close cousins and relatives to higher positions in different parts of caliphate, after he threw the rightly appointed off from their posts. Amir Muawiya, the close cousin of Othman and the governor of Syria, manipulated Othman to burn original text of the Quran in order to take his revenge that he and his father, Abu Sufyan, suffered on the day of Conquest of Mecca, when Muhammad destroyed all respected gods and idols of Arabia, which Abu Sufyan and Muawiya had to watch helplessly, and could nothing to save their age-old revered gods and idols.

My objective is not to establish what happened to these chapters or who eradicated them from the Quran. But let’s suppose that these chapters were not revealed to be included in the Quran, but were created by man. What the readers should note is how beautiful, elegant and eloquent these two chapters are, much better than many chapters of the Quran, which threatens Allah’s open challenge that no-one can create a chapter like those of the Quran. Thus, not only one chapter but two chapters have been created by man like a mirror through which a humiliated and disgraced Allah can see Himself.

Now, I have a simple question to all Muslims: Have not Allah lost His challenge in Quran 2:23, therefore, His honor and integrity as the claimed God of the universe?

Muslims can help maintain Allah’s honor and integrity only by accepting that those two chapters were indeed revealed by Allah for inclusion in the Quran.  In that case Allah again fails in His promise/challenge to maintain the Quran unchanged.