So how can Islam’s initial accelerated period growth during its first 1400 years be explained?

Dawkins coined the term meme from the Greek word mimema ("something imitated"). It describes the way in which cultural traits and patterns evolve, spread and become the norm. As in the animal kingdom, only the most suited to flourish will survive.

A meme is anything that can be copied from one mind to another. A catchy tune is a meme. The recipe for your mum’s casserole as it passed through the generations is a meme. Even the word "meme" is a meme, which has just made a copy of itself in your mind. A combination of memes is known as a memeplex, a self-ratifying complex more stable than single memes on their own. 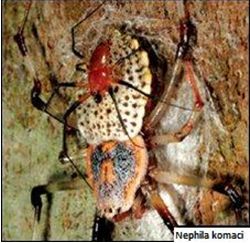 Do memes make people happier? Or more successful in life? Or have healthier children? No. Just because a memeplex is successful, it doesn't necessarily mean it serves our best interests.

A black widow spider eats her mate after sex. Kamikaze bees inject a suicidal sting into predators of the communal hive.

As shown above, the female Nephila Komaci spider snaps off the male's penis inside her so as to plug in his semen and permanently ensure he never procreates with another female again!

As you can see, a successful gene doesn't necessarily benefit the organism or its hosts. The genes making up a deadly virus may kill millions of people and cause untold misery, but when it comes to the numbers game, the virus is still an undoubted success.

A memeplex can also use human lives in the service of its propagation, cold and indifferent to our existential plight. Religions are also a collection of beliefs passed from one person to another and come under the same umbrella as a memeplex. They were originally compiled in tablet form or consolidated as Holy Scriptures, and now with modern printing presses can be reproduced in their millions.

The earlier religious memeplexes had a "live and let live" attitude, and never encouraged its followers to convert others. But then a rival with an added incentive arrived; spreading the memeplex allowed its followers to earn bonus spiritual merit. They were saving souls and after a lifetime of sin, heaven had suddenly become a realisable goal. In other words, they had just won the Divine Lottery.

So after a thousand years, which of these two religious variants would be likely to have more copies in the minds of people?

If we were going to deliberately design a combination of beliefs with the purpose of making ones that could dominate, then we would be hard-pressed to do better than the evangelical Abrahamic faiths. And the proof is in the figures. In just 2000 years, Christianity and Islam have amassed 3.5 billion followers (over 50% of the world’s population). That is faster than any other memeplexes in history.

Judaism’s initial growth was helped by the claim that the Jews were the chosen people and a superior race, and Islam repeated this jingoistic claim by saying:

Tabari IX:69 "Arabs are the most noble people in lineage, the most prominent, and the best in deeds. We were the first to respond to the call of the Prophet. We are Allah's helpers and the viziers of His Messenger. We fight people until they believe in Allah. He who believes in Allah and His Messenger has protected his life and possessions from us. As for one who disbelieves, we will fight him forever in Allah's Cause. Killing him is a small matter to us."

In many ways it is very similar to the way the British Empire, or even the American capitalist ideological expansionist drives were powered. These primary drivers for the Crusades were furthermore encouraged by the global dominance ethos of their respective scriptures.   In other words Islam was largely an Arabic imperialist mission, in much the same way as the Crusades were a Christian one.

Yet it’s not just about growth. A powerful memeplex must also suppress thought-competition from other competing memeplexes.

During the Dark Ages, Christian leaders successfully suppressed modernity and science to preserve the status quo. Reformation of the Church, and the Enlightenment which followed as a result, catalysed a period of rapid change and advancement in Western Europe and North America, and church attendance has dropped dramatically ever since.

Over the last few decades, Saudi Arabia has been spending a large portion of its petrodollars building mosques around the world. Yet ironically according to Sharia law, no non-Muslim religious structures are allowed to be built inside its own lands. It takes years of red tape for existing churches in other Arab Nations such as Egypt to be even allowed to be repaired. This puts the houses of worship of any competing memeplex in a state of permanent decline. For over 700 years, the great Nalanda university in India was a center of learning for a wide range of subjects, including philosophy, science, mathematics. Nalanda was one of the world's first residential universities, i.e. it had dormitories for students, before the Turks invaded & quashed it. In 2001 the destruction of Afghanistan's ancient heritage, the Bamiyan Buddhas, led to global condemnation of the Taliban regime. And we still find that despite Indonesia being one of the more inclusivist Muslim states that Christian minorities are required to wear the hijab in some state-sponsored schools.

I had a fairly typical moderate Islamic upbringing. From the age of 5, I was made to attend mosques for Friday prayer and shortly after began to rote learn parts of the Quran. As a young boy my parents would always encourage me to keep Muslim friends. I prayed 5 times a day and fasted regularly, as part of the ‘Farz/Fardh’, or obligations, set upon every believer.

It was during my teenager years when doubts began to materialise and I began to feel uncomfortable with certain aspects of Islam, such as its laws on inter-marriage and apostasy. If a woman wants to marry a non-Muslim then she has to convert him to Islam first.  When it comes to apostasy, not only is it illegal in Islamic states to leave Islam, but that it is also punishable by execution and enforced by the government’s very own thought police. As an ex-Muslim myself, please do not take this as me signing my own death warrant!

I was taught that if society were inhabited by correctly practising Muslims then we would soon discover celestial order and harmony throughout. The world belonged to Allah, it was our duty to return it to its rightful owner.

But a successful memeplex well-drilled into the minds of fundamentalists can take such literalism to a whole new level.  We find that this desire for utopia, along with the promise of eternal heaven, can somehow paradoxically justify the ultimate Jihadic fantasy of attaining world peace through suicide bombings.

Yet I never judge believers too harshly.

Good Muslims all over the world have resisted the autocratic and restrictive version of this memeplex, which in turn goes a long way to explain the stark knee-jerk reaction from the fundamentalists.

"Muslims are the first victims of Islam," wrote E. Renan. "Many times I have observed in my travels in the Orient that fanaticism comes from a small number of dangerous men who maintain the others in the practice of religion by terror."

Whatever fanaticism there is, it comes from a small group of influential men who control these weak disillusioned minds. They frogmarch them out of the mainstream with a more reactionary and almost hooliganised identity we see out on the protest marches today.

Hopefully it will stop there, before it lands in more troubled waters tomorrow.