How the Sikhs Countered the Brutality of the Foreign Muslim Invaders turned Rulers in India, Part 5

The Hindus, Sikhs and other natives of India had to suffer a great deal of oppression and hatred from the Muslim rulers and the local Muslim population. Though the disciples of the Sikh gurus urged them to stand up against the Muslim tyranny and oppression and take revenge, the gurus rejected such proposals on the ground that it will not be proper for the saints to be vengeful. It is also mentioned that Emperor Akbar, an avowed apostate of Islam, was not hostile to the Sikhs and other non-Muslims, but the situation greatly deteriorated again after his death. Particularly the barbaric torture inflicted upon Guru Arjan Dev by Emperor Jahangir and his eventual martyrdom greatly altered the view of the Sikhs toward the Mughals. "They resolved not to submit meekly to their oppressions but to defend their rights by arms." [RCM BVB vii:307]

The reason for Emperor Jahangir’s wrath toward Guru Arjan Dev was the fact that the Guru had given blessings to Jahangir’s his rebellious son Khusraw and even had lent him Rs. 5,000 for financing his revolt (Beni Prasad, History of Jahangir). The emperor summoned Guru Arjan to Lahore and fined him Rs. 200,000. When the Guru refused to pay the fine, he was tortured to death in June 1606 at the age of only 42.

Guru Arjan Dev’s martyrdom had a profound impact upon the future course of the Sikh faith. His son and the successor Guru Har Gobind, then a boy of 11 years, received his father’s instruction that said – “Let him sit fully armed on his throne and maintain an army to the best of his ability.” [Ibid, vii:310] 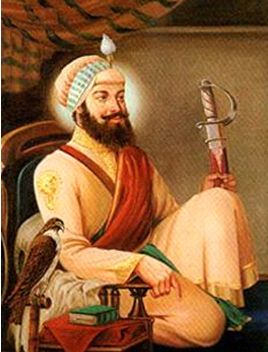 The sixth guru Har Gobind, also called the Saccha Padshah (True Emperor), was born on 5 July 1595 and became the Guru on 25 May 1606, aged only 11. Following the instructions of his father Guru ArjanH Dev, he resolved to resist the tyranny of the Muslim rulers with force, and not submit without protest.

Resolved to confront the Mughal Emperor with armed resistance from the outset, Guru Har Gobind hung by both sides of his throne (Akal Takht) two swords signifying Piri and Miri – one symbolized spiritual power and the other temporal. “In the guru’s house dharma and worldly enjoyment shall be combined”, said Guru Har Gobind. He raised a Sikh army by arming and training his sturdy disciples, and he selected a team of 52 as bodyguards. He also built a large stable for seven (or eight) hundred horses, three hundred horsemen and sixty gunners. Guru Har Gobind also built a fortress at Amritsar, called Lohgarh Qilla (Fortress of Steel). He had his own flag and war-drum which was beaten twice a day. Opposed to the present-day ethical eating habit of vegetarianism, Guru Har Gobind sanctioned and encouraged eating meat and took to hunting.

Apart from the Lohgarh Qilla, Guru Har Gobind built Akal Takht or God’s throne in front of the Har Mandir in 1609. He used to sit on the Akal Takht in princely attire for administering justice. He excelled in matters of state, and his court was noted for its splendour. He loved to tell stories of fearless bravery and valour of the Hindu warriors against the Muslims, particularly the tales of the heroism of Rajjput fighters Jaimal and Patta in the Chittore Fort.

He thus began militarizing the Sikhs and included training of riding, sword fighting, wrestling and hunting with the usual daily practice of meditation and preaching. He established a formidable army and created an independent government of his own, rivaling the Mughals, and thus succeeded in turning the Sikhs into an independent sovereign entity, separated from the agencies of the Mughal Government. With these reformations, the Sikhs could form and run a separate state within the Mughal State.

The Guru also initiated congregational prayer, called sangat that immensely increased religious fervor and solidarity among the Sikhs, thus strengthening the spirit of amity and cooperation among them.

These activities of the Guru aroused dread and anger of Emperor Jahangir. The emperor captured Guru Har Gobind and imprisoned him at the Gwalior Fort for twelve years in 1609. It is said that, fearing a revolt by the Sikhs and the masses, he was set free after three years. After his release from the Gwalior Fort, the Guru a took tactical policy, acting as friendly collaborator with Emperor Jahangir. He accompanied Jahangir on his campaign to Kashmir and while returning, the emperor died at Rajauri in 1627.

Guru Har Gobind was a brilliant martial artist (shastarvid) and an avid hunter. He encouraged people to maintain physical fitness and keep their bodies ready for physical combat although his policy was sometimes at odd with more established members, such as Baba Budha Ji.

Following the period of Emperor Akbar’s friendly relationship toward the Sikhs, Emperor Jahangir’s oppression and the barbaric torture and eventual martyrdom of Guru Arjan prompted Guru Har Gobind to undertake militarization of the Sikhs. Guru Arjan had foreseen it would no longer be possible to protect the Sikh community without the aid of arms. Guru Har Gobind clearly saw that too, and taking his martyred father’s instruction, built a large stable of 700-800 horses, while 300 mounted followers were constantly in attendance upon him, and a guard of fifty-six matchlock-men secured his personal safety.

Jahangir could not tolerate Har Gobind’s armed policy and autonomy, and imprisoned him. But the emperor was forced to release him after 3 years as the Guru’s followers and people across the country were poised to raise revolts against Emperor Jahangir’s throne, because the cruel Jahangir not only martyred Guru Arjan and imprisoned Guru Hor Gobind, but had also imprisoned about 52 Hindu kings from across the country.

After release from prison, Guru Gobind remained in cooperative terms with the rest of Emperor Jahangir’s reign, but his relation with the Mughals turned bitter again when Jahangir’s son Shah Jahan ascended the throne. Shah Jahan was an orthodox Sunni and held intense contempt toward the kafirs, such as the Hindus and Sikhs. For example, during the tolerant reign of Akbar and somewhat tolerant reign of Jahangir, many converted Hindus had returned to their ancestral faith and Hindus and Muslims were intermarrying in many instances. In 1632, it was brought to Shah Jahan’s notice that some Hindus of Rajauri, Bhimbar and Gujarat had married Muslim girls, who were living with their husbands like Hindus. Shah Jahan immediately issued an order to stop such marriages and to separate the Muslim girls from their Hindu husbands if the latter refused to embrace Islam. As many as 4,500 such women were recovered and their husbands were often butchered. In one instance, a Muslim girl named Zainab had married a Hindu boy named Dalpat and had taken the name of Ganga. When Shahjahan learned about it, Zainab and her seven children were taken away and her husband was executed as per Shah Jahan’s order. In another incident, a daughter of the Qazi of Lahore had left her parents and accepted Sikhism and married a Sikh man. Guru Hor Gobind offered them shelter. The incident aroused wrath of Shah Jahan, who sent a contingent to punish the Guru in 1628. But the Mughal army was routed suffering heavy losses at the battle at Sangrana near Amritsar.

As Shah Jahan’s discontent toward the Sikhs increased, the emperor destroyed the Sikh baoli (open well) at Lahore. Amidst rising Mughal oppression of the Sikhs during Shahjahan’s rule, the discord gradually took shape of large-scale Sikh uprisings led by Guru Hor Gobind, which lead to death of thousands of people on both sides. Battles were fought at Amritsar, Kartarpur and elsewhere. The Guru defeated the imperial troops near Amritsar. He was again attacked by a provincial detachment of Lahore, but the attackers were routed and their leaders slain. Guru Har Gobind grasped a sword and marched with his devoted soldiers among the troops of the empire, or boldly led them to oppose and overcome the provincial governors or personal enemies.

The Achievements of Guru Har Gobind

Both Guru Arjan Dev and Guru Har Gobind realized that it was not possible to liberate the Hindus and Sikhs from slavery of the Muslim rule without armed resistance. It was very significant that after ascending the throne, Akal Takht, Guru Har Gobind hung two swords on both sides of his throne – one signifying the spiritual power and the other temporal, which is inherent in the Vedic teaching that muscle power (Shakti) must work hand in hand with spiritual power (Bhakti) into practice. With this inspiration from Guru Arjan Dev and Guru Har Gobind, the Sikhs were able to fight and win victory over the savage Muslim powers—a Sikh legacy that continued into the reign of Maharaja Ranjit Singh during the British period.