Quoting from the great WWII statesman Winston Churchill’s literary work, for which he won the Nobel Prize in Literature in 1953, has become a criminal offence in the UK—as it seems.

Paul Weston, chairman of the UK’s Liberty GB party and a candidate in the 22 May European Parliament Elections, was arrested by the British police on 26 April for quoting a passage from Winston Churchill’s book.

We recently reported that the Birmingham Magistrates' Court was to give its verdict on a case of whether or not Tim Burton, Radio Officer of the British party Liberty GB, caused “racially aggravated harassment” against prominent Muslim activist Fiyaz Mughal by publishing three tweeter posts.

Mughal is the director of the “Tell Mama” project that used to receive £214,000 government fund for monitoring and reporting anti-Muslim attacks in the UK. Tell Mama’s funding was discontinued after The Telegraph exposed Mughal of exaggerating anti-Muslim attacks following the killing of British soldier Lee Rigby in a London street by Jihadists.

After the exposure of Mughal, Burton’s wrote in a tweet: “I wish to report Fiyaz Mughal for being a mendacious, grievance-mongering little Muslim scumbag & I want my £214,000 back now”.

The other two tweeters were of similar tone, calling Mughal a “taqiyya-artist”.

Birmingham Magistrates' Court May Tell If ‘Islam is a Race’?

In recent years, the defenders and apologists of Islam have frequently tried to equate the criticisms of Islam with ‘racism’. You speak unfavorably of the horrors that were committed by the prophet of Islam, you criticize any abhorrent doctrine of Islam – be prepared to be called a ‘racist’, a very abhorrent and even criminally culpable accusation in Western countries.

Islam is an “ideology”, more precisely a “religious ideology” of strongly political nature, and it can be embraced by people of all races and ethnicities. Yet, charging the critics of Islam as racists has become almost universal, particularly in Western countries. And a high-profile ongoing legal battle in the Birmingham Magistrate’s Court in Britain can settle the question of whether or not Islam is a race.

On 8 April 2014, Birmingham Magistrates' Court will settle the question of whether defendant Tim Burton, Radio Officer of the newly-formed ‘Liberty GB’ political party, has committed “racially aggravated harassment” to Muslim activist Fiyaz Mughal by calling him “a mendacious grievance-mongering taqiyya-artist” in a Twitter post.

Fiyaz Mughal used to run the ‘Tell Mama’ project that reported anti-Muslim attacks in Britain. After the horrendous murder of soldier Lee Rigby by Jihadists on a Woolwich street, Mughal was exposed for exaggerating the numbers and seriousness of “anti-Muslim attacks”, which resulted in the discontinuation of Tell Mama’s £214,000 yearly government funding.

Our Website was out of operation for the past few days due to server spoilage. The old server could not be salvaged and we have now moved onto a new server.

Epidemic of Muslim Rape of Western Women: Pig-head Breast Tattoo to the Rescue 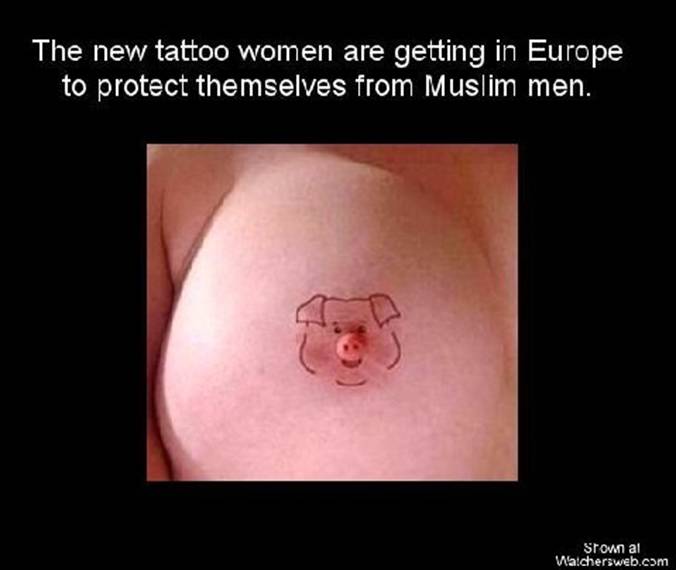 Pig-head breast tattoo is sweeping Europe as a measure to protect infidel women from Muslim rape...